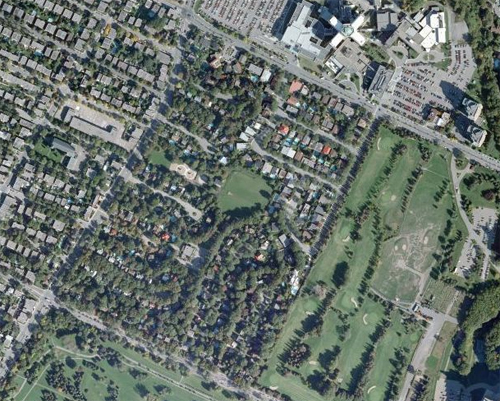 There was a time, I can imagine, when suburbs were not such a terrible idea.

Ignore for a moment the gluttonous land consumption and slothful car-dependency that suburban development has brought about, and push aside the isolation, segregation and placelessness that come with single-use zoning, dead-end streets and bland look-alike homes. Perhaps you can see the shining attraction that suburbs once represented: a family-friendly community on the frontier between the bright lights of the big city and the pristine wilderness.

Rosemont’s Cité Jardin was an early experiment in suburban development and perhaps a better model than that which has sprawled over the extremities of our island and splashed onto the north and south shores. The Cité Jardin began in 1941 as a co-op that would allow middle-class families, with their numerous children, to own a small property. At the time the average buyer earned around $2,000 per year, the equivalent of $29,000 in today’s dollars. However, construction was slow and costly during the war years. In the end only 165 homes were built instead of a projected 600, and the co-op went bankrupt in 1947.

The planners adopted a model that has since come to epitomize suburban sprawl: detached, single-family dwellings clustered around dead end streets. However, unlike most suburbs, the Cité-Jardin was designed with an internal network of public spaces. Each cul-de-sac opened into a pedestrian alleyway which led to a central park (see image below). The development also included a central building that served as office space, food co-op and chapel – a measure that would be dubbed mixed-use in today’s planning lingo. As of 1957, the central building was used as a primary school for the countless baby boomer kids that populated the neighbourhood.

Furthermore, the neighbourhood is framed with urban boulevards (Viau, Assomption and Rosemont), which are served by public transit.

All of this, I knew ahead of time from the community’s website, so when I set out to wander about Rosemont’s Cité Jardin I departed with an optimistic attitude. Here kids can roam freely between school, park and friends’ houses without ever crossing a street and teenagers can hop on a bus when they are ready to widen their stomping ground. Parents can leave their cars in the driveway and take the metro to the office, or work in the hospital right across the street.

Could this really be a viable hybrid between city living and the suburban dream that North Americans seem unable to shake?

As I turned off busy Boulevard de l’Assomption and into the Cité Jardin, I found myself on streetscape that could easily been in some remote West Island enclave rather than a mere ten minute walk from the metro. The street names – Bouleaux, Sapins, Épinettes, etcetera – offered no further distinction. The “Garden City’s” obsession with greenery has certainly paid off, and tree branches tangled high above the rooftops. But overall, I have to say I was a little underwhelmed. Despite the emphasis on public space in the neighbourhood design, private space was still overwhelmingly dominant. Most houses had large, fenced in backyards, many had private pools, and some even their own jungle gyms, despite the central neighbourhood park a few steps away. With the baby boomers grown up and gone, the school is now used as a centre for intellectually handicapped people rather than a proximity service.

While the Cité-Jardin began as an affordable housing project of sorts, it has since become something else.

Now residents are up in arms because once-modest homes are being renovated in a “disproportionate way” – doubling or tripling in size, and sometimes taking down 60-year old trees in the wake of construction. A citizens group has successfully pressured the borough to regulate the surface areas of homes, and enforce a minimal distance between houses, and protect the 60-year old trees.

Avenue des Cèdres: One of these houses is not like the other ones…

Of course all of these regulations ensure that the Cité Jardin remains one of the lowest density areas in the city, much to the satisfaction of local residents.

The Cité-Jardin is a unique experiment in urban planning and it remains a life-size example of how suburbs could have been (and could still be) planned differently. In this sense, perhaps it is worth preserving. On the other hand, a living laboratory could be more valuable than a static model. Is this neighbourhood resilient? Does it harbour a distinctive way of life along with a unique form? Or is it, in the end, just another suburban state of mind?