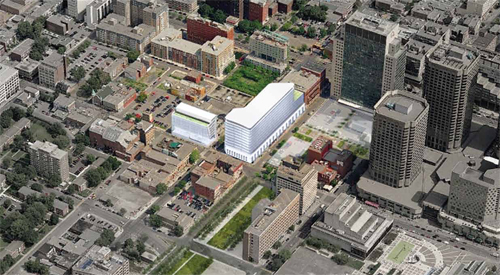 Spacing commentor Louis Rastelli called me out on this one: it doesn’t make a whole lot of sense to critique the plans for 2-22 Ste-Catherine East without taking the Sociétéde Développement Angus ‘ plans for the lower Main into account.

Last month I wrote about the historic buildings that would be threatened by the development, but I have been hesitant to delve into the SDA’s Quadrilatère Saint-Laurent because it seemed to me that they were far from set in stone. After all, the developer still doesn’t own four of the properties that they plan to integrate into their 12-story retail and office complex: the buildings that house the Main Grocery, Montreal Pool Room, Café Cleopatra and the building that faces Ste-Catherine.

These businesses have clearly weathered the decades on the Main because they dish up what locals (and visitors) crave, be it affordable groceries, hot dogs or scintillating strip shows.

But my good faith was woefully misplaced. According to an article in La Presse the city has no qualms about expropriating the holdout occupants.

This stretch of the Main has certainly seen better days (it has seen glorious, legendary, iconic days). New life is needed, but do we really need this much of it? Does it have to be this new? And do we need it all at once? Does a revitalization project necessarily have to be an ilot, a quadrilatère, or a quartier? Can’t the SDA be content to rebuild on the lots that they have acquired without topping it all off with a glass tower? Can’t the site be allowed to develop organically – as the Main has always done – evolving to meet new demands as the completion of the Quartier des Spectacles brings fresh faces to the neighbourhood?

John Zouboulakis, the owner of Café Cleopatra doesn’t want to sell his business when things are just starting to get more lively on the block. At a public meeting on May 20th, he spoke of the injustice of expropriation:

The full transcript of the May 20th meeting is available here.

Rastelli’s article in the Mirror yesterday also questions the need for 12 stories of mostly office space in the performing arts district:

“[SDA] insist the tower’s height can’t be reduced or else it wouldn’t meet Hydro-Québec’s needs. However, a Hydro-Québec spokesperson told the Mirror they don’t need new permanent office space and don’t plan on relocating workers from other buildings.”

Sigh. I know the answer to this question. Building is expensive. It’s not just expensive, its inordinately expensive. Construction costs in Montreal have outpaced, and even lapped inflation in the past ten years. In order to break ground, they’ve got make space for a whole bunch of high-paying tenants.

During the public meeting on May 21st, SDA president Christan Yacciardi said that they’ve got no backup plan for the site in the case that the OCPM consultation process does not approve the proposal in its current form:

The full transcript of the May 21st meeting is available here (PDF). 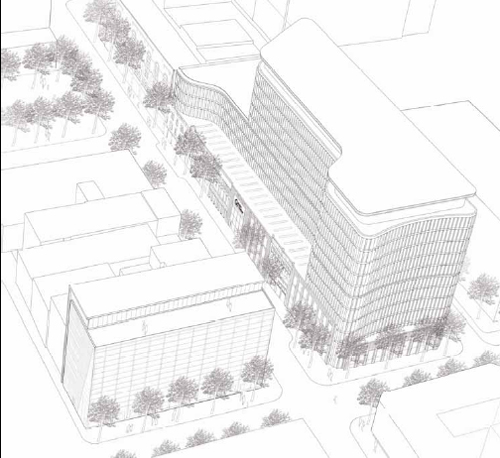 Images from SDA, Aedifica, Gilles Huot and Paul Andres, presented to the OCPM May 26th 2009 (PDF).

I have to admit that I’m rather smitten with the broad, curvaceous design that Andreu has proposed in this case. Furthremore, it would be insane do pooh-pooh the plans to turn grimy, faceless Clark street into a lively pedestrian mall with cafés and art galleries. And, at the risk of being labled a hipster or a yuppie, I am actually in favour of the fair-trade, eco-friendly and locally-produced stuff that this commercial centre will promote.

But not so smitten that I’m gung ho for razing the Main as we know it. Expropriating property owners and businesses on behalf of a private developer is a terrible precedant for the city to set, and expropriating established businesses located in centennial buildings in a national historic site is downright incoherant.

Can we find a comprimise between plan A and plan Z?

At the public meeting on May 21st, Yaccarini told Deniz Hadjien, son of the owner of the Montreal Pool Room, that he was open to discussing a place for the classig hot-dog joint within the new Quadrilatère.

Bring on the fair-trade hot dogs.

Public hearings will be held Monday June 9th for the Quadilatère Saint-Laurent. Opinions must be submitted in writing by June 4th – see instructions in english or french. All the relevant documents can be found on the OCPM website.