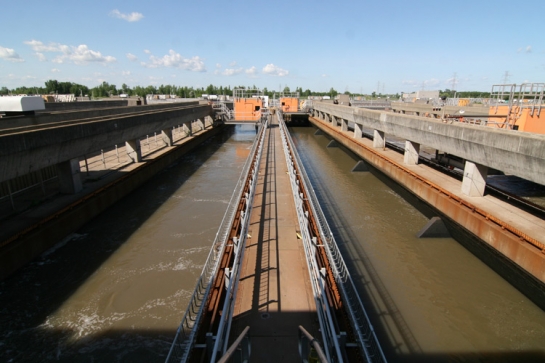 Montreal’s wastewater treatment plant can be found at the far east end of the island in Pointe Aux Trembles. It’s the largest in North America and ranks the third largest in the world- capable of handling 32 square metres of water a second. Raw sewage (usually) ends up here via a network of deep-level tunnels referred to as interceptors. These interceptors form a ring around the island, collecting and distributing wastewater to the plant before it has a chance to enter the surrounding rivers. To get a better sense of how the interceptors work, you can have a look at the entry I posted earlier on Undermontreal. 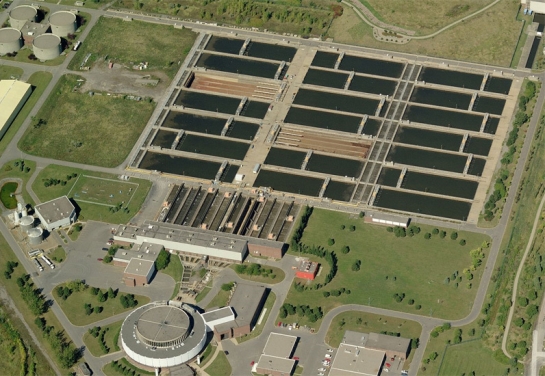 While it’s an impressive system in terms of its scope and capacity, the treatment process itself leaves much to be desired. In fact, it’s actually one of the worst in Canada. A national “report card” issued by the Sierra Club in 2004 gave the city’s treatment process a grade of F-. The only other city to receive a grade worse than Montreal was Victoria, a place which doesn’t even have a treatment process in place yet.

The biggest problem is that the plant only provides primary treatment of its sewage. Most other cities across Canada deliver secondary and even tertiary treatment of wastewater resulting in far cleaner water. By comparison, the effluent from Montreal’s plant remains full of pharmaceuticals, heavy metals, and a multitude of other contaminants. While this pollution is usually kept clear from the shores of Montreal, it inevitably ends up somewhere downstream of the island where the effluent has been known to be wreaking havoc with the river’s ecosystem. 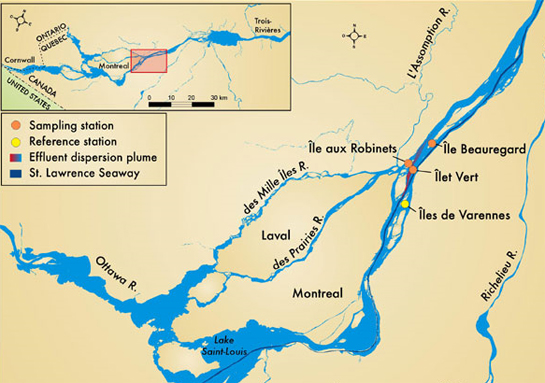 Even during the era of its conception during the late 1960s, Montreal’s proposed treatment plant was deemed to be inadequate to solve the problem of worsening water pollution. Secondary treatment schemes were entertained, but the costs involved were considered too high for it to be considered feasible. Instead, the plan was to incorporate additional levels of treatment to the plant after it was completed, which at the time was expected to be 1981. It was thought that by then “cheaper and better schemes may be available.”

Montreal has always been behind the times in terms of sewage treatment. While much time and money was put into developing its large-scale collector sewers between 1920 and 1965, their contents simply flowed directly out into the open waters surrounding the island.

Perhaps anticipating future problems, in 1930, the Province of Quebec ordered that Montreal start treating some of the sewage flowing into Riviere Des Prairies. Shortly thereafter, Montreal began work on the North Interceptor. This 14 foot tunnel was intended to transfer sewage towards a site on Isle de la Visitation where it was thought that a local treatment plant could eventually be built. The interceptor was such a low priority that it took 25 years to complete. As for the proposed treatment plant, ground was never even broken and by 1967, plans for its construction were officially scrapped. 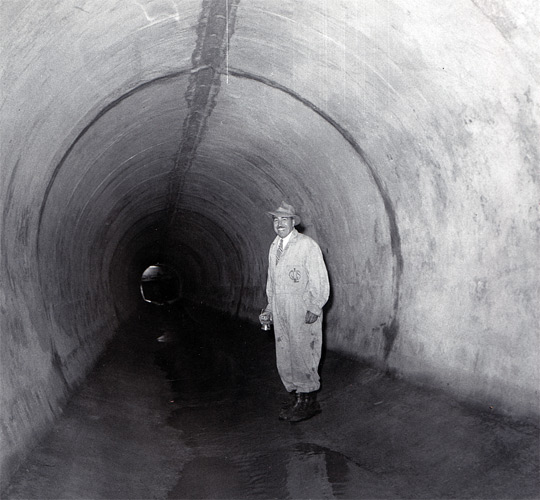 Final inspection of the North Interceptor sewer in 1955, 25 years after the start of its construction. Source: City Archives of Montreal

From Bad to Worse 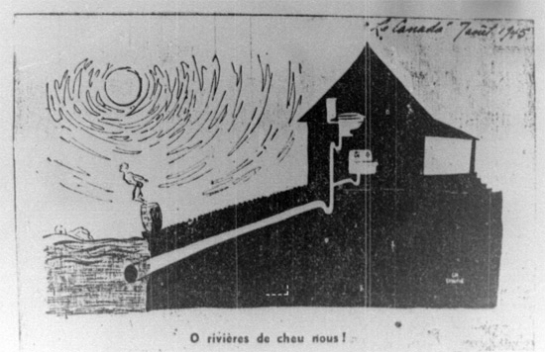 For close to a century, Montreal could always rely on the swift-moving waters of the St. Lawrence, Riviere des Prairies to whisk sewage away from the island. However, by the 1940s, it was becoming obvious that this practice was no longer working as well as it had in the past. Public swimming areas around the island were being forced to close. The waters were starting to foul. Clearly, there was no way of hiding the fact that the practice of continuously dumping sewage into the open waters was causing problems. Still, it would take another thirty years before concrete steps would be taken to help remedy the situation. 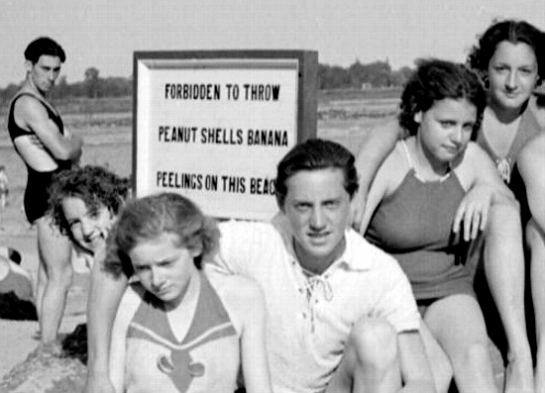 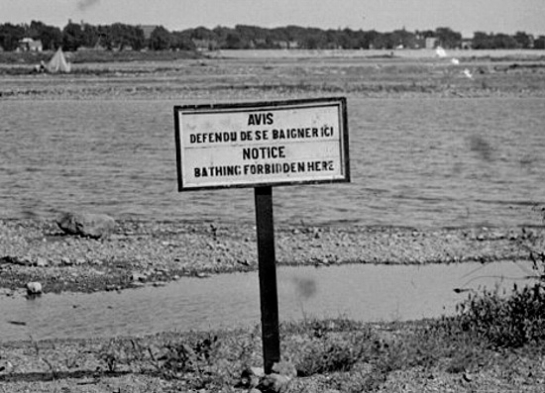 sle St. Helen beach signage – from no littering in 1937 to no bathing in 1941. Source: Pistard Archives

By the 1960s, an average of 400+ million gallons of sewage a day was being discharged directly into the waters surrounding the island. By contrast, during this same period, Toronto was cleaning 98% of its wastewater using a combination of four treatment plants. Montreal couldn’t claim to match this percentage until 1996. It would be the last major city in North America to start treating its sewage.

Starting to Get Serious 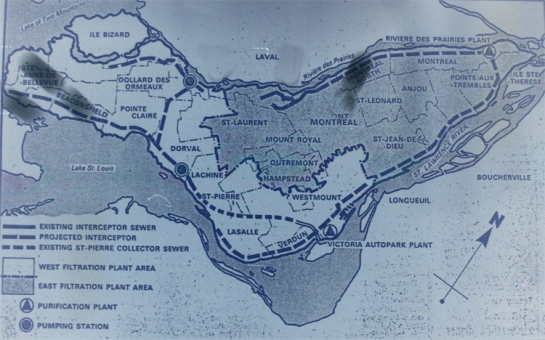 1970 map showing preliminary paths of the island’s interceptors and locations of its treatment facilities. Source: City Archives of Montreal

In the summer of 1967, during the middle of Expo, mayor Jean Drapeau’s engineering department released a report proposing, not one, but two treatment plants for the island- one which could handle the north/east watershed and another for the south/west encompassing downtown Montreal. Over the next few years, much debate amongst the island’s communities took place involving where these facilities would be located, how much could be spent and when they might be completed. A site adjacent to the Victoria Bridge (previously used as a parking lot for Expo) was considered as was Isle St-Therese, but both were later shelved due to “environmental concerns.” Years would pass before a master plan was drafted.

It was eventually decided to build just one treatment plant in Point Aux Trembles and eventually use it to treat all the island’s municipalities’ sewage. Both the North Interceptor and the St-Pierre collector system would be incorporated into the plan- measures which city officials claimed would help save millions of dollars. Work finally commenced in 1974 with the expansion of the North Interceptor. It was expected that the system could be completed and functioning by 1981. Turned out they were about 15 years off the mark.

The website for Montreal’s treatment plant provides a timeline highlighting key dates in the construction of its treatment system. It’s a decent overview, but it conveniently leaves out all the problems encountered along the way. There are no indications as to why the project took close to twenty years to complete at cost of over a billion dollars more than the initial estimates. 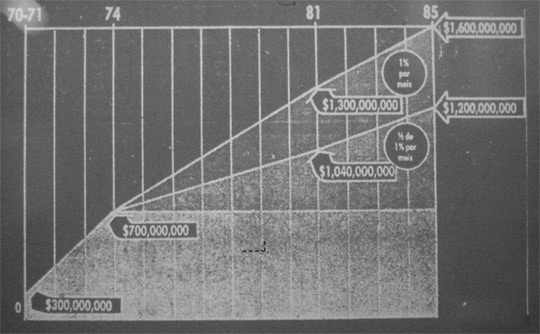 Graph from 1976 showing the escalating costs of the treatment project based on rising inflation and a completion date of 1986. Source: City Archives of Montreal

To go through that history of problems in detail would take far too long for one blog entry, but one can get a sense of it all by reading through the newspaper headlines that appeared over the duration of the project.

You get the idea…

Finally, by 1998 all portions of the interceptor network had been completed and was being used to transfer most of the island’s sewage to the treatment facility. Being grossly over budget and over schedule, the original plan to introduce secondary treatment never came. Having already been considered obsolete during its conception, today’s plant is in dire need of upgrading if it’s to match the expectations of the 21st century. An announcement was made last year that Montreal would be seeking $200 million to help convert the plant into an ozonation treatment facility. The conversion would make it the largest city in the world to be using this more efficient process, but so far details have been vague and it’s questionable as to how and when all this might happen.

But despite the fact the existing plant is behind the times in terms of treatment, it does do an adequate job of handling large amounts of wastewater. As well, the large-diameter interceptors can usually accommodate heavy rainfalls, which means a lower percentage of raw sewage ends up in the rivers when compared to other cities such as Toronto. As a result, the water around the island is a great deal cleaner than it used to be— enough so that the water is now deemed suitable for swimming. While the number of recreational beaches on the island has dropped from over 20 in the 1940s to only two today, they can still be used. It’s better than nothing, I suppose.

In Part II: A Look Inside our Crappy Treatment Plant.