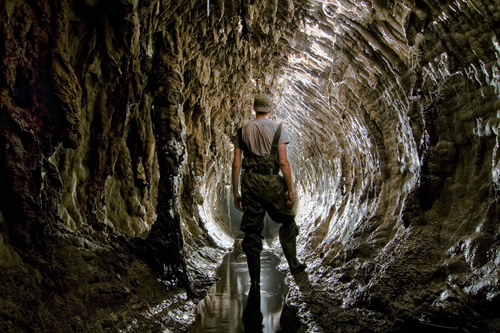 I have a feeling we’re not in Montreal anymore.

I’ve been asked a number of times if I’ve ever come across anything underground in Montreal that’s surprised me. I never really quite know what to say since most of what I see is fairly predictable. It’s mostly pipes and chambers of varying sizes, constructed out of either concrete, brick or occasionally metal. I haven’t (yet) come across any dead bodies, pirate ships or gold coins — although I did find an old wallet once. What surprises do exist usually aren’t worth mentioning; a section that abruptly ends or a stretch that gets larger in diameter when you were expecting it to get smaller. Not exactly the sort of stuff that inspires answers people are hoping to hear. Occasionally, though, I do come across things that I’d consider to be quite out of the ordinary and this entry involves one such example.

Enter the Cote St Paul Collector Sewer
The Côte St. Paul collector (CSPC) delivers wastewater from the southern half of Côte St. Paul towards the eastern edge of Point St Charles where it falls into a far larger sewer, the Saint Pierre Collector.

The main arm of the CSPC begins as a 6’ brick pipe built during the late 1800s and finishes with 12’ prefabricated concrete pipe that was set during the 1990s. Running parallel for much of its length is the former water conduit turned sewer that I covered in this entry. A short connection exits between the two via a 5’ pipe, thus allowing any excess flow to be conveyed from one sewer to the other. I’m assuming the CSPC was added (or more likely reconstructed) to accommodate the burgeoning neighbourhoods that came after the second world war.

The original brick portion of the sewer is fairly straightforward. There’s a nice example of a shaft where snow would have been dumped down into the sewers from street level. Rusty “shock bars” and a variety of stones lining the sides and bottom helped prevent ice and other falling debris from fracturing the surrounding brickwork. 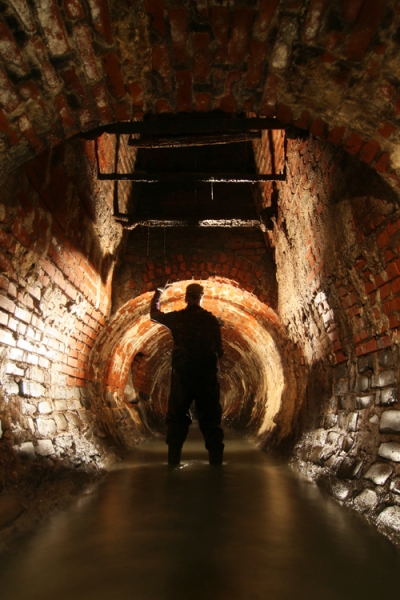 A 19th century snow-dump shaft at the beginning stages of the Cote St. Paul collector.

Eventually the brick comes to an end and the sanitary flow falls down into a nice little concrete chamber. 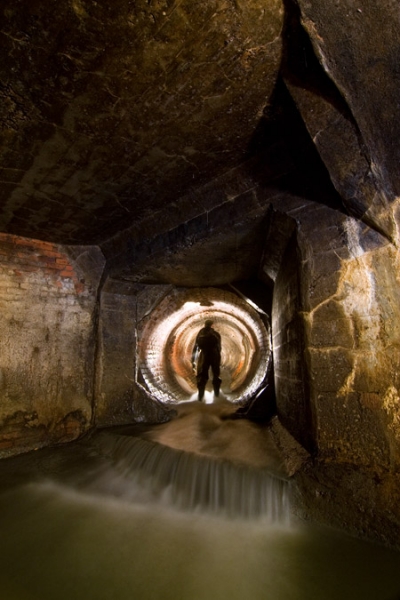 The beginning of the newer concrete section of the sewer that runs underneath Blvd. de la Verendreye.

Canoes in the Sewers?

For the next few kilometers, it’s a typical mid 20th century sewer- cast-in-place concrete and horseshoe shaped. It runs below underneath Blvd Lavendreye for approximately three kilometers, a stretch that contains few noteworthy characteristics. The exceptions are two shafts which former city planners have marked on maps as “pits pour canot” – literal translation: “well for a canoe.” 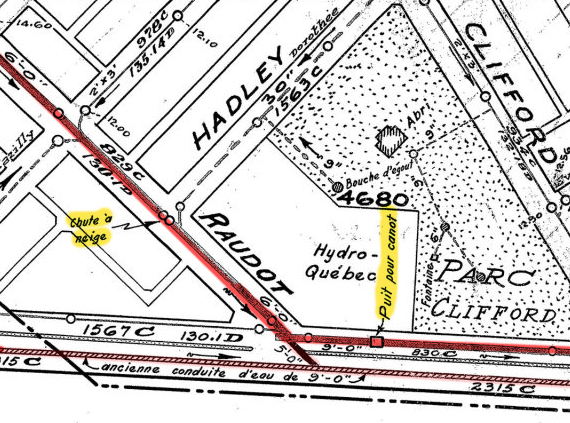 At the top of each of these shafts are two sets of racks which appear as though they were designed to swing up and down. It definitely isn’t a canoe (or boat) friendly contraption so it’s unclear where the name comes from. I’ve never come across this sort of thing anywhere else, either on maps or through firsthand experience walking through the city’s sewers. 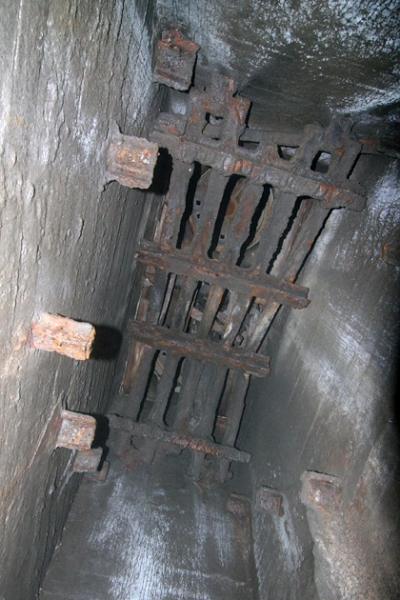 The mystery contraption at the top of the “canoe” pit. Obviously it hasn’t been used in quite some time.

Another Sewer, Another Planet 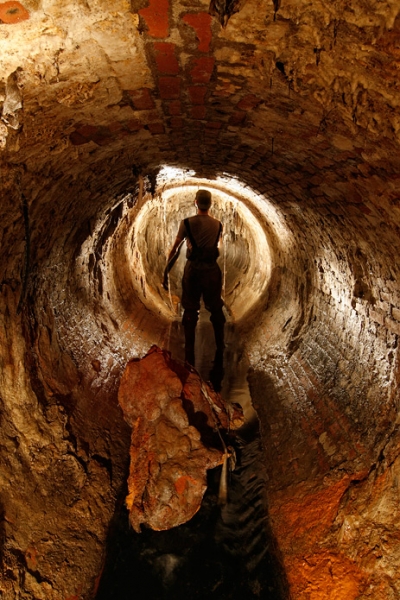 A giant flowstone that seems to have become dislodged from another point in the sewer.

It’s at the downstream end of the CSLC where things start to get fun. Here, a six-foot high brick relief sewer veers off to the North. I was hoping to be able to follow this to get inside a portion of Riviere St. Pierre that was covered over. Instead, I found something far better.

I’ve encountered calcite deposits inside sewers in the past. Stalactites, stalagmites, “soda straws” and flowstones are all to be found in just about any sewer or storm drain that is more than a decade or so old. Caused partially by the limestone in cement, these formations can help turn a run-of-the-mill system into something quite wonderful. This one is no exception. In fact, I’ve never seen anything else like it. 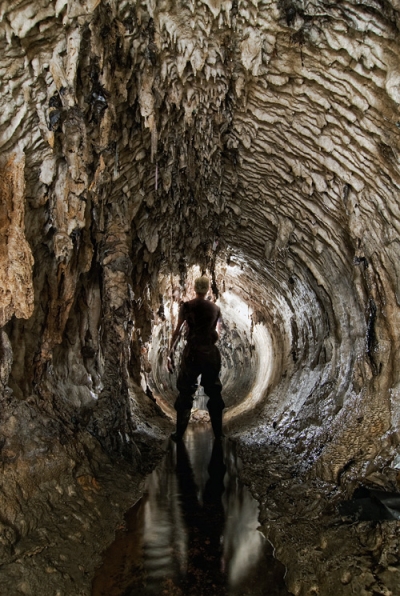 What happens when you don’t clean your sewers.

For roughly 100 meters, the walls of this century-old sewer make for a breathtaking spectacle. Nature has completely taken over to the point where you’re easily tricked into believing you’re not inside a man-made structure anymore. Instead, you are in a cave deep beneath the surface of the earth in some exotic country. Wherever you are, you are most definitely not 15 feet below a light industrial district and a fifteen-minute drive from your home.

An assortment of objects caught during higher water levels, lies snagged or in encased in the columns of calcite. It feels a bit like walking through a jungle, only the vegetation has been replaced with dangling plastic bags, condoms and panty-liners. As unsanitary as that might sound, the surrounding beauty supersedes the grossness of these individual objects.

Adding a bit of comedic relief to this relief sewers is an old (knock-off?) Spiderman action figure, which will most likely remain entombed in this blessed mess for the remainder of its days. Its pose only adds to its appearance of helplessness. 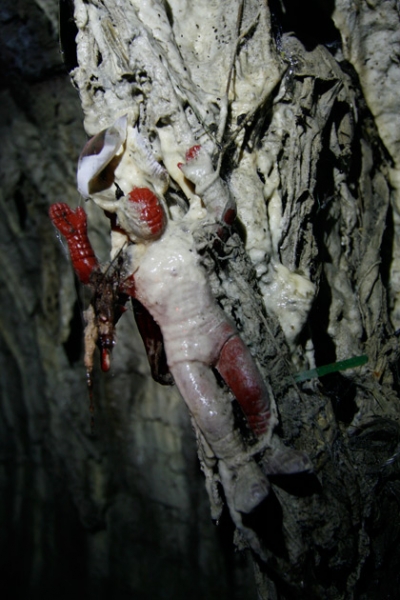 Around the Bend and Back Again 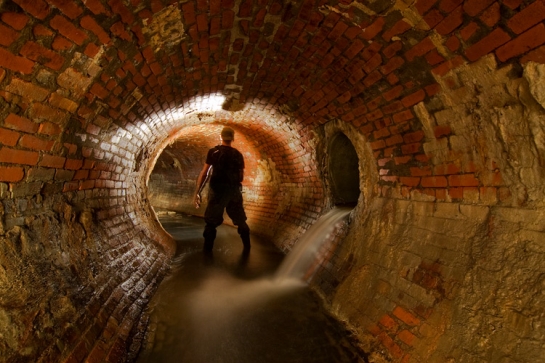 The spic and span brickwork around the next bend in the sewer.

Carrying onward, the sewer takes a 90 degree turn at which point things start to settle down a bit. Around the bend, the sewer is (almost) as clean as a whistle. Not only are the walls free of the formations and debris a few feet earlier, but water coming into it via a small connection runs clear and seems to be free of any sanitary flow. However, that doesn’t last for very long. 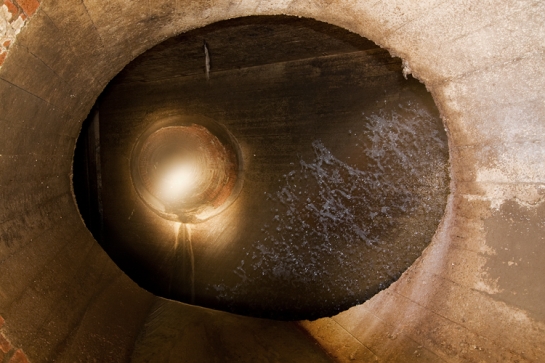 A torrent of sewage falling down from the main branch of the CSPC.

A loud rumble can be heard off in the distance, the result of a 12-foot drop-shaft chamber. Here the old brick sewer continues on, but is intercepted by the main arm of the Cote St Paul collector. A violent torrent of water from the latter falls down from an adjacent side of the chamber resulting in one big hot and foggy mess. Without any means of reaching the bottom of the chamber or the opposite side, there’s no choice but to head back in the opposite direction. 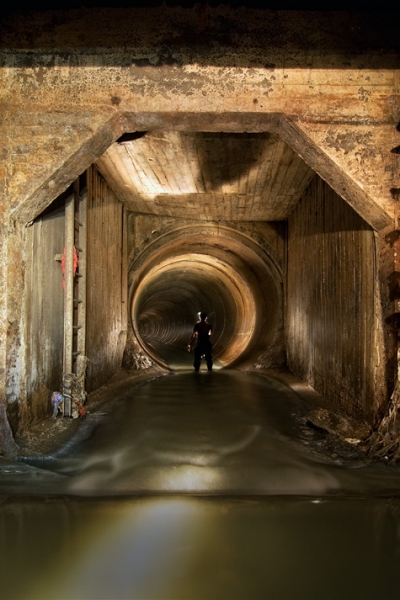 The gateway into the section constructed during the 1990s.

Once back out of the brick sidepipe, you can continue further downstream through the main arm of the CSLC. A bit further and the older concrete construction comes to an end and one is greeted with a taste of the 1990s. A robust hexagonal arch creates the entrance way into a robust chamber. A foot-wide groove designed to hold stop-logs runs down the walls and across the floor.

A short distance beyond this point is where you’ll find the beginning of a modern 12’ concrete pipe manufactured by Vibrapipe. Its name and casting date are stamped onto each section. Compared to the older sewers covered so far, this one shows few signs of wear and tear. While I wouldn’t look forward to having to walk through kilometers worth of this stuff, it can make for somewhat interesting space-age style photos. Fortunately there isn’t too much of this found on the island of Montreal, at least not for the larger diameter sewers. While common in other cities like Toronto, here in Montreal it’s still somewhat of an anomaly. 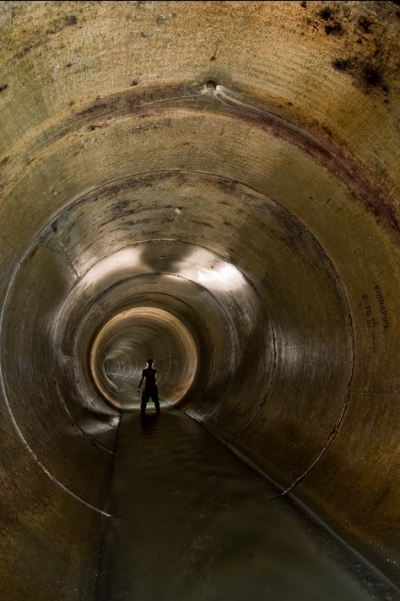 This section of the sewer takes roughly the same path as the smaller brick. Following this leads to another dropshaft chamber which incidentally is a short distance away from the other one. Right before the edge there are ten poles (aka “tell-tales”) suspended from anchors in the ceiling. 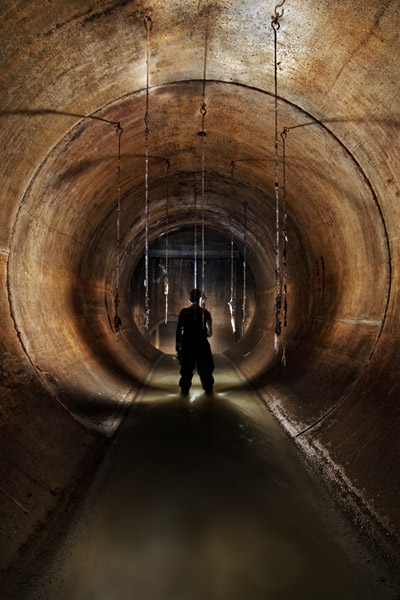 Suspended tell-tales inside the last walkable portion of the CSPC.

You’ll see these in Montreal sewers before any significant drop. The poles swing back and forth easily and are there to remind workers that they are near the edge of something that they could fall down into. In this case one 10 foot deep pit, with the other one just a bit further downstream is probably as good a place as any to put them.

It’s also a good place to turn around and head back home.