“I don’t know” I said aloud as I perused the fast food menu. “Orange drink is usually gross, and it’s kind of expensive too…”

“Oh its worth it,” the counter-girl piped up immediately. “Our Julep is made from fresh-squeezed oranges and our secret ingredient. It’s a family recipe that goes back to 1932.”

As much as “secret ingredient” fails to inspire confidence, the counter girl’s enthusiasm was itself refreshing. There was no doubt that she had complete faith in her product, and so I consented to a glass of Gibeau Orange Julep.

She filled a waxed paper cup from a pipe that hung down from the ceiling, and I couldn’t help thinking, as I did when I was a kid, that the 40-foot sphere above us was a massive julep reservoir.

And it was worth it. The fresh-squeezedness of the oranges was unmistakable, the “secret ingredient” reminiscent of creamsicle (although apparently it’s fat-free), the texture foamy down to the last drop. It was really, truly good.

Turns out I had a lot of misconceptions about Orange Julep. Not only does it taste good, its legacy goes back almost 80 years.

I’d always assumed that the massive roadside Orange was a pure 1960s kitch. Indeed, the 40-foot orange was constructed in 1966. Its shell was made with fiberglass segments ordered specially from a local pool manufacturer.

But my counter girl – and the paper julep cup – had claimed that Orange Julep has been kicking since 1932. Turns out that our massive orange monument is in it’s second incarnation. The original building, which was was in nearly the same location, dates back to 1945.  It was a smaller, concrete orange with windows on the second story. (I can only assume that it took the first 13 years of julep sales to raise the money for this jewel). 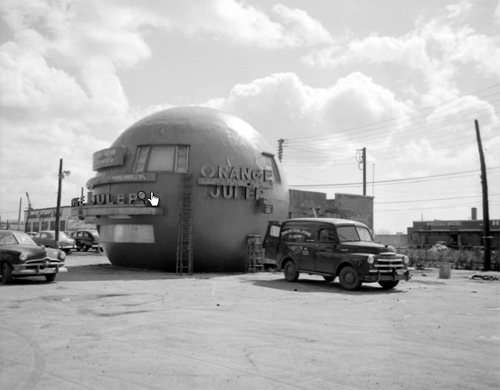 But Montreal’s most iconic (well, perhaps only) road-side attraction was hoppin’ long before the metro and the Décarie expressway opened up this neighbourhood to residential and commercial development. In fact, the original Orange was a victim of the widening of Décarie for the autoroute.

There was a tramway along Décarie in the 1940s, linking NDG to Ville-Saint-Laurent, but the area around Namur was largely undeveloped. Picturing the quirky casse-croûte on the open road somehow captures my imagination in a way that its current position on the edge of the Décarie expressway, kitty corner to outlet malls, has never managed to do.

It also helps explain why the big Orange has retained a tradition of summer-time car shows, à la 1950s Hot-Rod nights. For those of our readers who don’t have a car to pimp on site, it’s also right across the street from Namur metro.