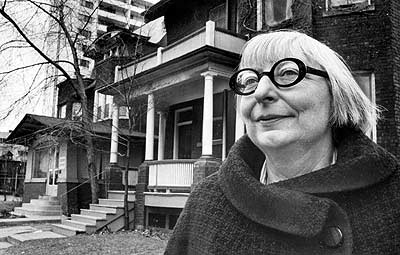 “While it is quite possible that Quebec would do no better on its own than as a province of Canada, there is little reason to suppose that it would do worse, and there are even some practical reasons for supposing that it might do better…. Dependence is stultifying, and sometimes the obverse is true. That is, sometimes independence releases new kinds of effort, opens up formerly untapped funds of energy, initiative, originality, and self confidence. “

– Jane Jacobs, The Question of Separatism

The name Jane Jacobs is familiar to just about any person interested in cities and she occupies a place of honour in the pantheon of urban thinkers. Jacobs was made famous by her 1961 book The Death and Life of Great American Cities, and to this day she is most well known for the influence that she had on modern urban planning. While she focused on urban issues throughout her life, she also intervened on a wide range of other political and social topics. One of her lesser know positions was support for Quebec sovereignty. What better day than La Fête nationale du Québec to take a closer look at her thoughts on the topic?

American by birth, she immigrated to Canada in 1968 and became a Canadian citizen in the 1970s. She quickly became politically active in her adopted homeland, and in 1980 she published The Question of Separatism, setting forth her views as to why an independent Quebec would be beneficial for the well-being of both Quebeckers and Canadians. As always, Jacobs delivers astute and heterodox analyses. Despite the fact that it was written 30 years ago, to this day it makes for an interesting and insightful read.

She starts off the book with what is in my view an extremely reasonable observation. Nationalism and national identity are fundamentally emotional. We can give logical reasons as to why one arrangement is better than the other, but at the end of the day it’s about how our imagination perceives our broader political community. According to Jacobs, “Trying to argue about these feeling is as fruitless as trying to argue that people in love ought not to be in love, or that if they must be, then they should be cold and hard-headed about choosing their attachment. It doesn’t work that way. We feel; our feelings are their own argument.” She then goes on to explain why, looking at the situation as objectively as possible, she saw Quebec independence to the the most beneficial way for forward.

Her support for Quebec sovereignty was largely born out of her belief that things on a smaller, more human scale are to be preferred whenever possible. “Large size creates complications. Big organizations need coordinators, liaison people, perscribed channels of communication, administrators, supervisors of supervisors, whole extra departments devoted to serving the organization itself.  A small organization can get along without a bureaucracy. A big one cannot.” In her view bigness is not synonymous with progress, and large structures should only be maintained when they are clearly the only form that will get the job done.

She was highly dubious that Canada passes this test, describing it as a “shotgun union that has proved neither happy nor fruitful”, and she saw many possible benefits in greater local control over policy. She also maintainted that the supposed economic dangers of separation were little more than fear mongering and pointed to many small countries such as the Netherlands and Denmark which have been very economically successful.

She also believed that ultimately sovereignty would be better for Montreal. She saw the Montreal of 1980 as being at a dangerous crossroads. It had lost its position as Canada’s metropole and unless something drastic changed it would be doomed to become a second-rate, stagnant regional city. Like Winnipeg or Halifax, it would be reduced to being a local administrative centre in a colonial, primary resource-based economy.  She posited that only as the metropole of an independent Quebec could Montreal remain economic vitality.

Jacobs draws an interesting parallel between Quebec’s National Question and Norway’s long and eventually successful struggle for independence from Sweden in the nineteenth century. Norway became a Swedish possession in 1814 when the two countries were fused together in the aftermath of the Napoleonic Wars. Over the decades Norway developed a nationalist movement that was slowly but surely able to extract more an more concessions out of the Swedish Crown: a Norwegian legislature, a flag, and even responsible government. After a number of political crises the Norwegian parliament unilaterally declared independence in 1904, a decision which was overwhelmingly ratified in a popular referendum. It was a messy divorce, but one which in the long term lead to greater prosperity and dignity for the two countries, and one that according to Jacobs Canada could learn from.

Many of Jacob’s more dire predictions haven’t come true, largely because over the past thirty years Quebec has been successful at carving away more and more autonomy from the federal government. Full independence hasn’t been acheived, but today’s Quebec is far more self-assured and independent than it once was. Quebec has managed to build up its own institutions, as well as its own local, homegrown economy, the so called Quebec Inc. As for Montreal, while it had a rough time in the 1980s, it has not seen the decline that she predicted, but has instead developed into the vibrant cultural and economic metropole of Quebec.

While not everything has come to pass as Jacobs predicted, many of her insights and comments have held up to the test of time. In many ways her Sweden/Norway analogy of slow, gradual separation has become an even more accurate analogy with thirty years hindsight. Of course, it remains to be seen in Quebec will make the final jump like Norway did. While not all of the points covered in The Question of Separatism are still relevant, it makes for interesting food for thought.

The Question of Separatism: Quebec and the Struggle over Sovereignty was published in 1980 by Random House Books and was based on a series of Massey Lectures given by Ms. Jacobs in 1979 entitled “Canadian Cities and Sovereignty Association”. It only went to print for one edition and it has never been published in French.