“Joe Beef is Dead. For twenty-five years, he has enjoyed in his own way the reputation of being for Montreal what was in former days known under the pet sobriquet of the wickedest man. His saloon, where men consorted with unclean beasts, was probably the most disgustingly dirty in the country… It has been actively at work over all that time for the brutalizing of youth — a work which was carried on with the utmost diligence by its, in that sense, talented proprietor.” (Montreal Daily Witness, quoted in Montreal by Gaslight, 1889).

Charles McKiernan, aka Joe Beef, died in his canteen of a heart attack at the age of 54. La Minerve newspaper estimated that up to 5000 people came down to his tavern on Common street on January 18th 1889 to pay their respects. Even in death – or perhaps even more so – Joe Beef was revered for his ability to break down the barriers of social class:

“A larger crowd of people have seldom if ever gathered to see the funeral of any Montrealer…” reported The Gazette, “All the town was there. The millionaire rubbed his fur-cuffed sleeve against the shiny coat of the mechanic out of employment, and the deadbeat with a lugubrious air of assumed seriousness apologetically jostled the smart broker who had stolen away from the board to see the funeral of “Joe Beef”.” (Montreal Gazette, January 19th 1889.)

His wife and six sons, aged between 7 and 23 years old at the time, led the funeral procession from the tavern to Mount Royal cemetery where he was buried and where his tombstone still stands. His epitaph, chosen by his second wife, Mary McRae, read:

Full many a man of wealth and power
Has died and gone before
Who scorned to give a poor man bread
When he stood at his door.

But Joe took in the Great Unwashed
Who shared his humble fare
He made their life a merry one
Without a thought or care.

Their eyes are dim for loss of him
Their grief is quite sincere
He housed them from the winter blast
And filled them with good cheer.

And when the day of reckoning comes
As come it does to all
Such sincere mourners they’ll not have
Behind their funeral pall.

At readers’ request, the text of this epitaph, as well as the ones Joe Beef wrote for his first wife and 3-year old son, were transcribed in the New York Times in 1905, a testament to just how far – in both time and space – the legend of Joe Beef had traveled.

By the time that W.H. Davies visited Joe Beef’s in the 1890s and wrote about it in The Autobiography of a Super-Tramp, he was surprised to find the legendary tavern rather clean looking with a number of Salvation Army officers in charge of the place. The institution was already tinged with nostalgia: Davies’ companion told him “When Joe Beef kept this place he was a true friend to travelers, but you don’t get much out of these people except you pay for it.” Nevertheless, Davies felt that he got his money’s worth during his stay (Davies, p.148-151).

The Salvation Army operated the institute for a short time, and then from 1903-1965 it the building was occupied by the Star Tavern. Between 1984 and 85 the it was restored, and then occupied by a religious Seafarer’s Centre. 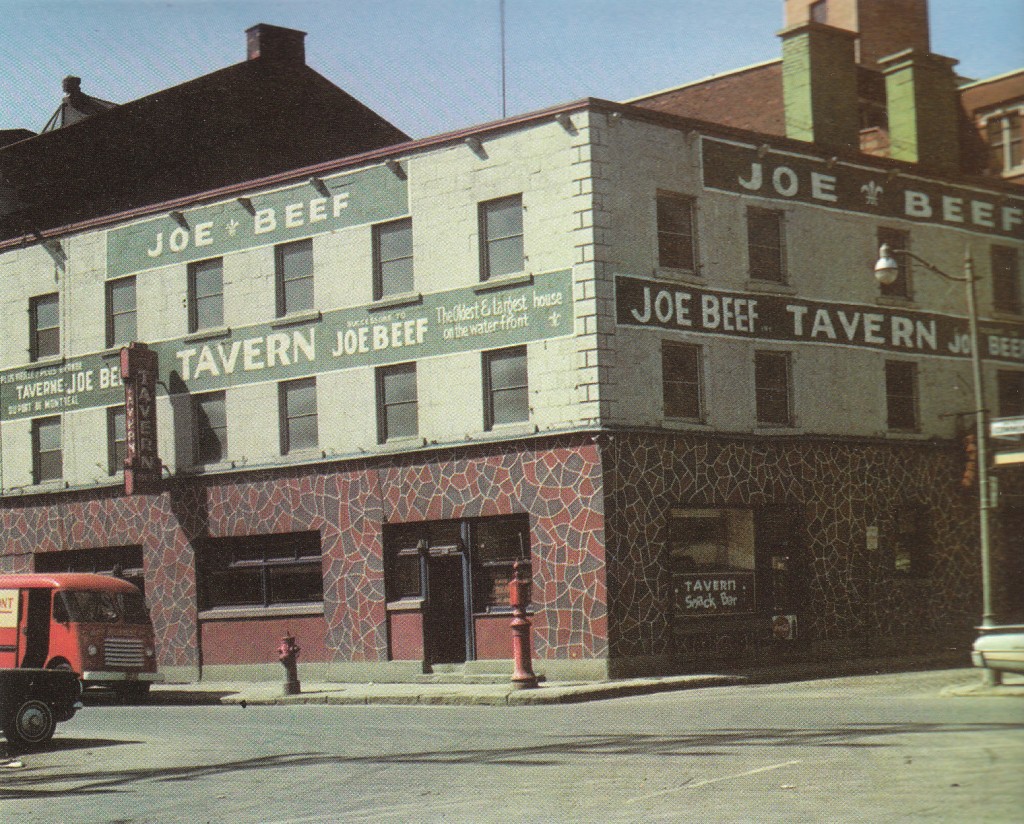 Today, a rather pricey steak house bears his name and claims to pay homage to the character. There is also a  park named after him in Pointe-Saint-Charles, which hosts a yearly public market.

David Fennario wrote a play in which a communist-manifesto-toting Joe Beef rallies Pointe-Sainte-Charles factory workers into a labour union. But, while he did support the unions of his day, the real Joe Beef was politically conservative, to the point that he got into a violent brawl with Liberals during the 1872 election (he was also a republican – a surprising stance for a veteran of the British military). Nor can I figure out what ties Joe Beef may have had to the Pointe.

It wasn’t only his rival at the Montreal Daily Witness that reviled Joe Beef and his canteen; the New York Times labled him a “morally wretched” person, the type who “do more harm in their life-time than a regiment of men could counteract, but who make themselves something of a reputation by dispensing a little ostentatious charity.”

An article in the Halifax Herald reported that the bar was frequented by “unkempt, unshaven, fierce-looking specimens of humanity…ready apparently, either to fight, drink, or steal, if the opportunity offered….As we came away from his canteen where we felt that dirt, bestiality, and devilment held high carnival, my friend said, ‘I believe Joe is worse than his bears and lower down in the scale of being than his monkeys,‘” the journalist wrote.

As far as I can tell, there was hardly a kind word written about him during his lifetime. But how much of this lyrical Victorian-era journalism expressed true contemp and how much was meant to titillate upper and middle class readers with visions of the carnivalistic cavorting of lowly laborers and tramps?

Today temperance has gone out of fashion and labour unions have practically become a religion in Quebec. If one is willing to overlook his treatment of animals, Joe Beef seems perfectly saintly by modern standards. But how much of his current reputation is tinged with nostalgia for grittier, more authentic times, for social services served up at the local tavern rather than tied up in three levels of government.

In hindsight it is possible to ignore the stench of the wildcats pacing beneath the beer-soaked, saw-dust-covered floor boards, the pathetic sight of drunken bears baited by dogs, the inevitable bar fights and the occasional choking, the unemployed men and underpaid laborers – many of whom had families to care for – returning night after night to spend push their last nickel across the bar.

What fascinates me about Joe Beef is how his quirky character seems to straddle moral extremes – he’s the man with the heart of gold who ran a “den of filth”…Personally, I’m on the fence, unwilling to either glorigy nor demonize him: my impression tends to align with the anonymous author of Montreal by Gaslight (1889):

“Joe Beef’s may be low, it is certainly dirty on the cellar and ground floors ; and the value of such a place to the city may be questioned. But let one thing be remembered — many a tired head has here found rest ; many a hungry mouth has here been filled. Surely, this charity will cover a multitude of sins.”

This is the final article in a series of three posts about Joe Beef. You may also want to read the previous articles, Where the Wild Things Were and Friend of the Working Man.