So it turns out that a good deal of Pointe-St-Charles is a dump. Literally.

Historically, the edge of the Pointe was a wetland, home to thousands of geese (could this be where the adjacent neighbourhoood of “Goose Village” got it’s name?). But between 1866 and 1966, household and industrial waste began to be dumped into the swamp. Between the 1930s and ’50s, dikes were built and the dump expanded right into the river, filling in part of the passage between Pointe-Saint-Charles and Nun’s Island.

The Société d’histoire de Pointe-Saint-Charles created this map which shows the evolution of the shore-line from 1801 to 1968. 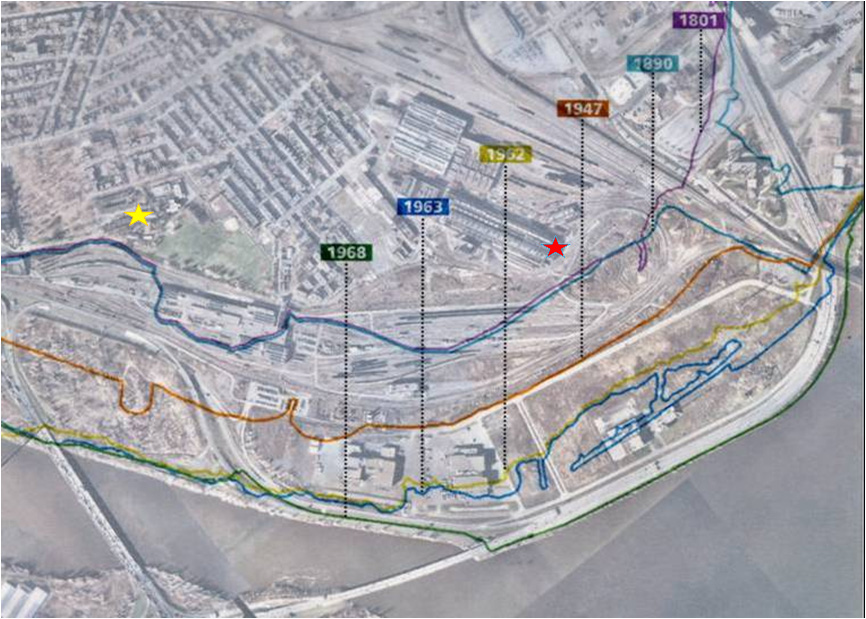 I added the two stars above as reference points: the yellow star is the Maison Saint-Gabriel and the red star is the entrance to the CN shop, built in 1929. When they were built, both landmarks were on the water’s edge. Today, they are more than 500 metres from the riverbank.

In the image  below, the yellow arrow below points to the CN shop in 2005. 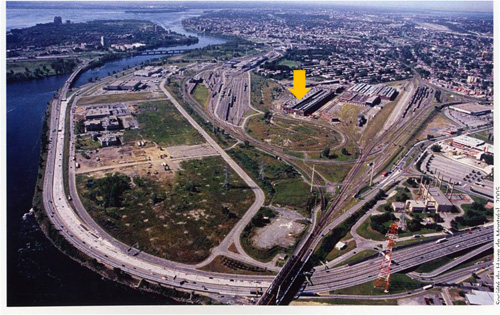 In the 1960s, a highway was built along the waterfront, joining Decarie with the Champlain bridge in order to provide easy access for visitors to expo 67 and the dump was paved over to be used as the parking lot. It is estimated that 56 hectares (6 million square feet) of land – if a pile of pavement-topped trash can be called “land” – were gained by this means. This area has been developed as the Technoparc de Montréal.

The list and volume of contaminants found in this site is scary to behold: among other things, we’re talking about 3 Olympic pools worth of petroleum hydrocarbons contaminated with PCBs. Today, there are a series of pumps that work day and night to try and keep this buried garbage dump from further contaminating the river by diverting contaminated groundwater into the sewer system (whether our sewage treatment plant is equipped to deal with such a panoply of contaminants i s another story). The Commission for Environmental Cooperation of North America is pursuing the issue under the Fisheries act.

How disconcerting to learn that a piece of this island is not solid ground, but a century-old environmental disaster whose burden will be borne by generations to come. Even if the redevelopment of the CN yards does manage to create a bit of public waterfront access, there probably won’t be any beach-bumming along this coast for a long, long…dare I say ever?

These photos and much of the information in this post were provided by Mark Poddubiuk, professor of urban design at UQAM. For more info about the site contamination: Commission for Environmental Cooperation of North America (2008). Factual Record: Montreal Technoparc (PDF).