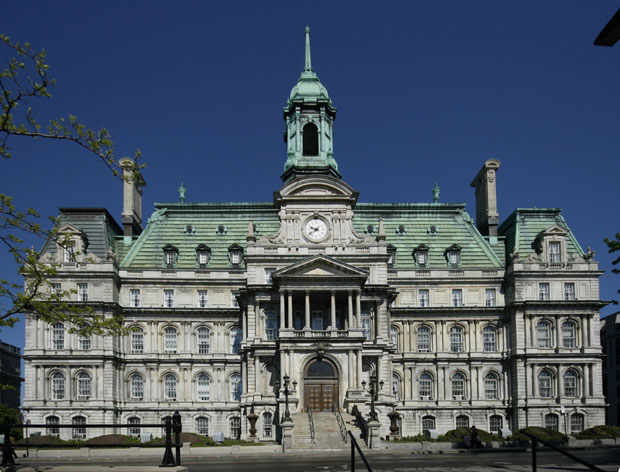 An argument that has been circulating in the media lately is that Montreal is “over governed” because it has too many elected officials. Various commentators and organisations, such as the Board of Trade of Metropolitan Montreal, have come out in favour of reducing the number of city councillors. The eccentric Michel Brûlé, editor and possible long-shot mayoral candidate in 2013, has proposed to reduce the size of the Montreal council to “no more than 30”. All this talk of too many councillors also seems to have some echo amongst the general public: a poll released at the end of last year shows that an impressive 65% of Montrealers agree with the statement that Montreal has too many elected officials.

So how does our City Council actually size up when compared to other major cities around the world?  When up against many English Canadian and American cities, our 65 member council (103 including borough councillors) looks huge by comparison. Los Angeles has only 15 city councillors, despite being having over twice the population of Montreal. New York City has 51 councillors, a number comparable to ours, but the city also has five times our population. These are numbers that smaller council proponents are fond of bringing up, but it’s only half the story.

Once one leaves North America, the trend reverses. Go to France and you’ll see that most municipalities have large councils. The Conseil de Paris has a whopping 162 members; and this doesn’t include their hundreds of borough councillors. Go to the Berlin regional parliament and it’s a similar situation with 149 councillors for a bit more than twice the population of Montreal. And like Montreal and Paris, Berlin also has a two-tier system with hundreds of borough councillors. But of major European cities, it’s Stockholm that gets the prize with 101 city councillors for a population that is half of ours. So when all of this is considered, one can see that Montreal is actually in the middle of the pack, not way out in the front.

Below is a comparison of the situation in a few different cities across the world. The far right column shows the number of residents per elected official, since 50 councillors means something very different in a city of 1 million versus a city of 10 million. 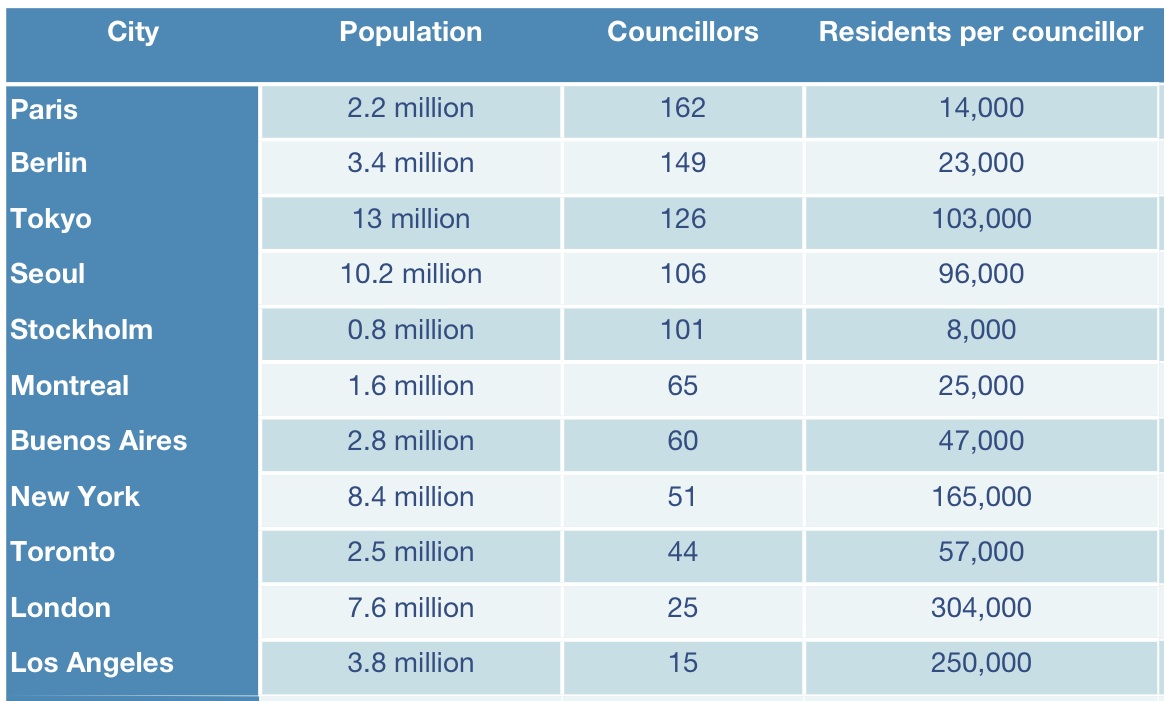 So any objective analysis of the data should put to rest the idea that there is something fundamentally wrong or unusual about the size of the Montreal City Council. So why then does the “too many councillors” argument continue to gain traction?

The idea that “two many politicians” makes for bad governance is not new, and has actually been circulating for some time amongst right-wing populists. Former Ontario premier Mike Harris reduced the Ontario legislature from 130 to 103 seats in 1999 as part of his “Common Sense Revolution”. Current Toronto mayor Rob Ford also campaigned on halving the size of the Toronto City Council. Closer to home, during our last municipal elections right-wing also-ran Louise O’Sullivan also promised to halve the number of city councillors if elected. This fixation stems from a conflict between two fundamentally different ways of viewing local government.

One paradigm sees local government as an apolitical purveyor of services. It’s not a space where differing ideologies and interests compete to influence the development of the city; it’s a corporation that builds roads, collects garbage, and maintains public order. As such its work is not political, but rather administrative. In this mindset, the logical decision making structure to draw from is corporate governance, with the city council serving as a sort of board of directors. Orthodox management theory says that for maximum efficiency and rational governance, decision making should be keep within a relatively small number of people, perhaps around ten to twenty. In municipal government this translates into a small number of councillors who are more trustees, managing a corporation in the public interest, than actual representatives. It’s a traditionally Anglo-Saxon model for local government, which explains its prevalence in North America outside of Quebec.

The other paradigm sees local government as being inherently political, like any other level of government. While many local government dossiers are non-contentious, this model admits that there are bound to be ideological disagreements that can only be solved by duking it out in the public arena. In this mindset, the logical structure to draw from is that of a parliament. It might be messier, but only a large deliberative assembly could hope to represent the wide range of opinions and interests in a populous metropolis. Moreover, having a lower population to politician ratio means citizens are more likely to have direct access to their elected officials. This is the model that Montreal uses, as well as most of the non-Anglosphere West.

While proponents of a smaller council claim it would be a common sense change to promote good government, it’s actually part of a political project based on a right-wing, small-state mentality. It has little to do with improving local government for average Montrealers, and more to do with its proponents’ knee-jerk, ideological opposition to our current parliament-inspired model. All this is not to say that everything is fine in Montreal and that our current political structures are above criticism. But it’s important to identify real problems and strive to develop real solutions, instead of wasting our time talking about red herrings.