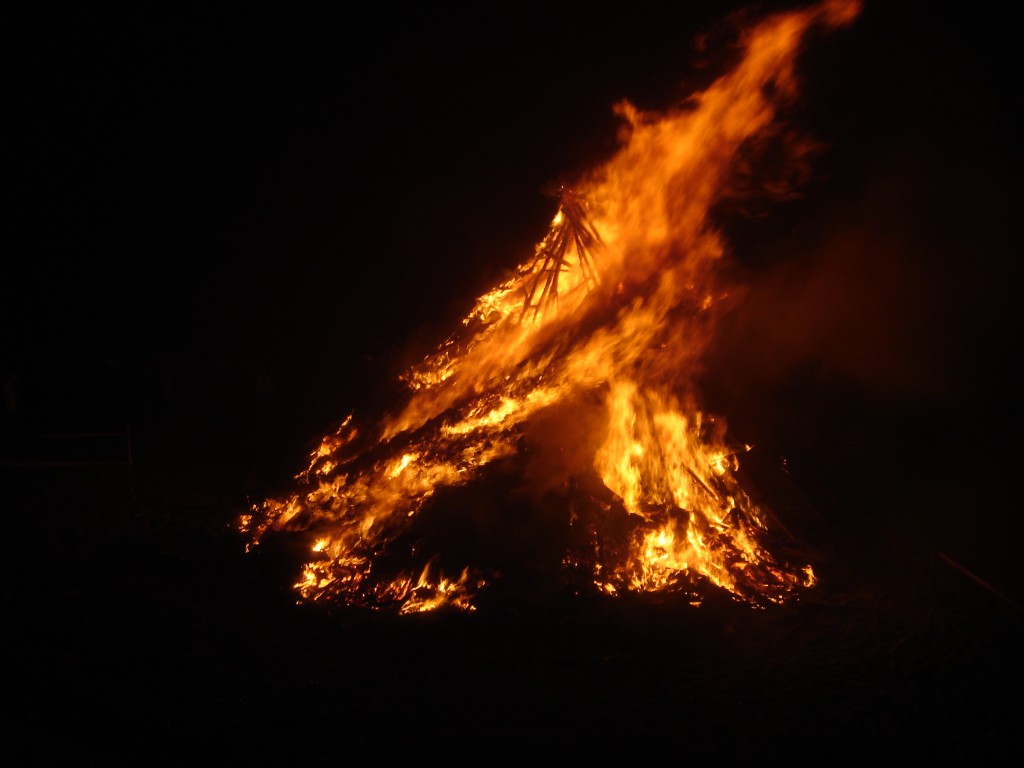 The 17-year old girl stared in fascination at the flames.

“I’ve never seen a fire like this before,” she told me.

This was last week, when I was a thousand kilometers north of here, accompanying a group of Montreal kids on a high school exchange: we were toasting marshmallows over a few burning logs and a flaming wooden crate a camp site near  the border of Labrador.

What do you mean? I asked.

“We never had money for summer camp,” she answered with a shrug, and it occurred to me that this young woman may have never actually been in the presence of an open flame.

Imagine growing up without ever seeing a flame bigger than a lighter spark, birthday candles, maybe a fireplace, or whatever you can pyro in the school yard. I’ve always maintained that the city is a good place for children, but this seems like a small tragedy.

Project for Public Spaces has published an article on How and Why to have Public Campfires which describes how fire has a particularly strong power to act as social glue:

“There also seems to be an ancient etiquette common to all cultures, that allows strangers to approach a fire…many people, when they draw near a campfire, seem to feel that they can talk a little to the strangers near them, perhaps about some overlapping memories of other campfires.”

The author speaks from 7 years of experience hosting campfires in Dufferin Park in Toronto. While an open fire in a public park might seem like risky business, the Friends of Dufferin Park highlight that public campfires actually increase park safety:

“You’ll be helping with park oversight while you’re at the fire … A city is a place of many strangers, and it can be scary – a dark park even more so. But a campfire is a reassuring circle of light and activity.”

So where are the friendly neighbourhood campfires in Montreal?

The local fire code limits bonfires (“feux de joie“) to 3m in height and diameter, which frankly sounds more than reasonable, and requires them to be a minimum of 75m from buildings and 200 m from high-risk industrial sites. A permit is also required.

According to the permits office in Verdun, reached through 311, it is possible to get a permit for a cooking fire on a private property (“have a pot of potatoes on hand”, I was advised). However, I have a hunch that when it came down to it, the 75m rule would preclude most backyard burns. Then I was shuffled to the recreation department where I was informed that it was not possible to get a permit to hold a fire in the public park “because of the precedent that it would set.”

There is a touch of hope: I was told that if I wanted to organize a major event involving a bonfire, for instance for Saint-Jean-Baptiste, I could apply to the borough council.

What do you think? Is it foolish to try and play with fire in the city? Or is tending the flames a fundamental part of the human experience?