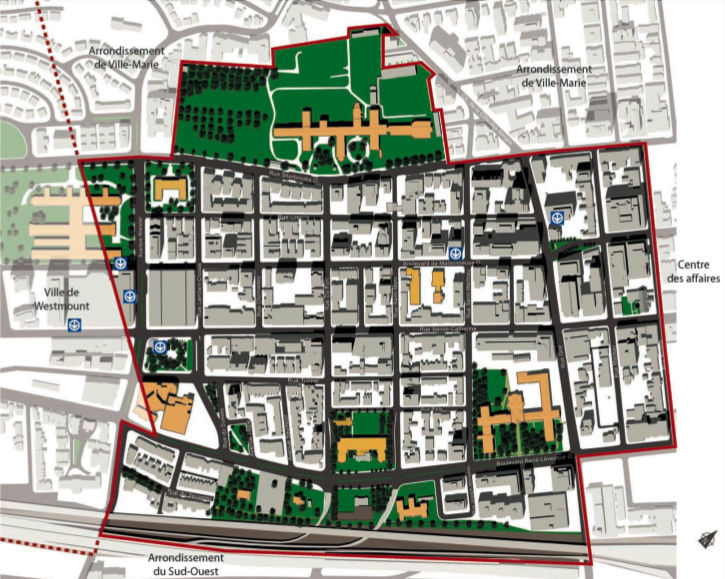 The West End of Downtown is a study in contrasts. Its residents are varied: from low-income recent immigrants, working-class rooming-house residents, and wealthy professionals, to students from across the country and farther. Beautifully restored Victorian townhouses rub shoulders with increasingly decrepit concrete apartment towers from the 1960s boom years. Home to 15,000 people, it is the densest neighbourhood in the city.

This unique neighbourhood will be seeing major changes over the coming years according to a Special Planning Initiative (Projet particulier d’urbanisme) unveiled last month by the Ville-Marie Borough. This goal of this initiative is to provide a framework for future development in this neighbourhood, and the borough council adopted a preliminary version in February. Public consultations are ongoing, after which modifications will likely be integrated. Here are some highlights of the plan’s proposals:

Significant expenditures are planned. Most notable is a face-lift for Cabot Square, including enlarging it by narrowing certain surrounding streets. A new public park is also called for next to the former Victoria School, reusing a site that is currently a parking lot. The borough also hopes to make the various private gardens (Grey Nuns, Collège de Montréal, Dawson, etc.) of the area more accessible to the public, likely through the negotiation of agreements with their owners.

Regarding housing, the main goal is to consolidate the residential character of the neighbourhood, mainly through incentives to developers to create more residential projects in the area. The city hopes to encourage the construction of new units of housing for wide range of demographics, but at the same time an explicitly stated goal is to increasing the number of owner-residents. Much expected new construction will presumably result from the densification of the extreme west of Ste-Catherine St. with more le Séville style projects, particularly around Cabot Square.  The plan also recognises the need for renovations of many now half a century old apartment towers. 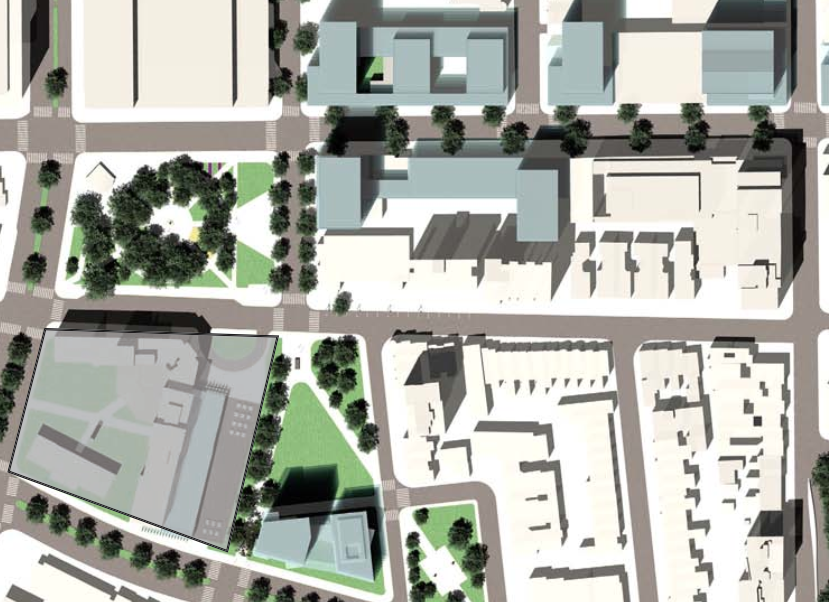 In line with the emphasis on the neighbourhood’s residential function, improving quality of life in the neighbourhood is also a key priority. Yet to be defined increases in services for families and the elderly are called for. The neighbourhood is bombarded with traffic, and calming measures are proposed, as well as securing intersections for pedestrians. Greening initiatives are proposed to reduce heat islands and beautify streetscapes. Increased social work intervention is called for in Cabot Square, an area frequented by many homeless people.

The plan also identifies the protection of heritage buildings, notably the grand institutional buildings of the neighbourhood (many of which are slated to change usage over the next few years) and the Victorian mansions of Shaughnessy Village. The borough proposes to create a new Site Planning and Achitectural Integration by-law to regulate renovations, transformations, and expansions of heritage buildings with the goal of ensure harmonious insertion of new constructions in the existing urban fabric. The preservation of green spaces will be a big consideration when evaluating changes of usage of institutions.

Special attention is given to the development of Concordia University, which the city seems to perceive as the key to economic vitality in the Western Downtown area. It hopes to support the institution’s development by cooperating to better integrate future expansions into the urban fabric, and by considering the needs of education institution when planning public spaces.

The vision presented by the borough has many attractive qualities. Investments in public spaces are long overdue, as is a coherent strategy on how to manage the impending change of usage of many local landmarks such as the Grey Nuns Complex. The desire to preserve the integrity of institutional buildings is to be applauded, and if made good will ensure that no more of the architectural gems of the neighbourhood fall to developers’ wrecking balls. Moreover, the plans to reduce traffic are particularly necessary in this neighbourhood that still bears the scars of the construction of the Ville-Marie Expressway.

The biggest problem with the document is not what is in it, but rather what is lacking. Improving public space and quality of life are positive goals, but it’s important to ask: quality of life for whom? Despite all the lip service the Tremblay administration has given to mixité sociale, there is no concrete plan to ensure that affordable and social housing is built in the neighbourhood, despite the fact that over half of the area’s residents are low-income. On the contrary, the only aspect of residential development for which there is a concrete plan is the acceleration of the construction of luxury condo towers around Cabot Square. Some luxury development in not inappropriate, given already high property values in the area, but balance and inclusiveness are needed.

The city’s commitment to afforable housing becomes even more dubious when one remembers that in 2008 the SHDM sold off two of its holdings in the neighbourhood, 1225 Sussex and 1850 Lincoln, which totaled 177 units of housing. Such a decision flies in the face of the Tremblay administration’s pro-inclusion rhetoric.  Improved “quality of life” means little if it is simply code for incentives to attract more luxury residential development to the detriment of lower-income residents. Moreover, building a dynamic, vibrant neighbourhood requires low-income and middle-class residents, not just expensive condos that serve as pieds-à-terre for the wealthy.

Also of concern is the fact that few concrete measures are proposed to increase the level of services offered to the local population. This is a neighbourhood with no primary school (the closest being in Westmount), no community centre, and no local public library. It’s no wonder that the city has trouble retaining families when such services aren’t present. And while the need for a more diversified offer of services is brought up in principle in the Special Planning Initiative, these issues aren’t addresses head-on.

The Ville-Marie Borough has given a mandate to the Office de Consultation Publique de Montréal to conduct public consultations on the project. Initial information sessions occurred this week and in late April audiences will be held to receive comments and written submissions, after which modifications will be proposed. Hopefully in the final version of the plan more social vision will be added to complete the laudable urban space vision already present.