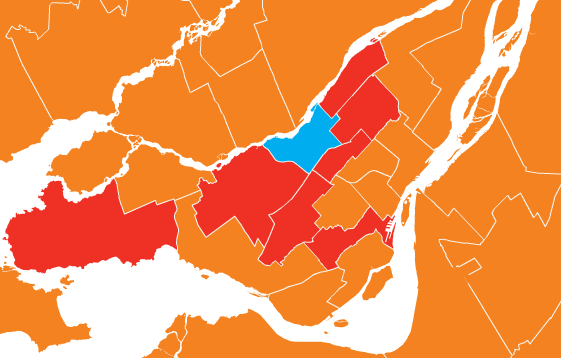 The dust is finally settling from Monday’s federal election and Montreal’s (and Quebec’s) political geography has been radically transformed. A total of 812,000 Montrealers cast ballots and here’s how the votes add up on the island:

Half of island’s ridings changed hands as previously unassailable Liberal and Bloc majorities melted in the face of the NDP surge. Four Liberal incumbents fell including the veterans Marlene Jennings in NDG-Lachine and Pablo Rodríguez in Honoré-Mercier. The Liberals were reduced to only their most solid strongholds, and the night of the election Radio-Canada even prematurely declared Marc Garneau defeated in Westmount-Ville-Marie. On the Bloc side, five seats flipped including that of party leader Gilles Duceppe who trailed his NDP challenger Hélène Laverdière by over 5,000 votes. Only Maria Mourani in Ahuntsic survived the deluge in a tight three-way race.

Of all the candidates on the island, the one receiving the largest raw number of votes was the NDP’s Alexandre Boulerice obtaining 27,500 votes for 50.8% of the vote in his riding of Rosemont-Petite-Patrie. In terms of percentage, it was Thomas Mulcair who won the most comfortable victory with 56.4%, more than double that of his Liberal rival. The tightest race was in Westmount-Ville-Marie with only 650 votes separating the NDP and the Liberal candidates.

With results like these, hopefully we have now seen the end of any party thinking it can take its Montreal seats for granted. But two steps forward, one step back; a party that 87% of us didn’t vote for has just won a majority government.