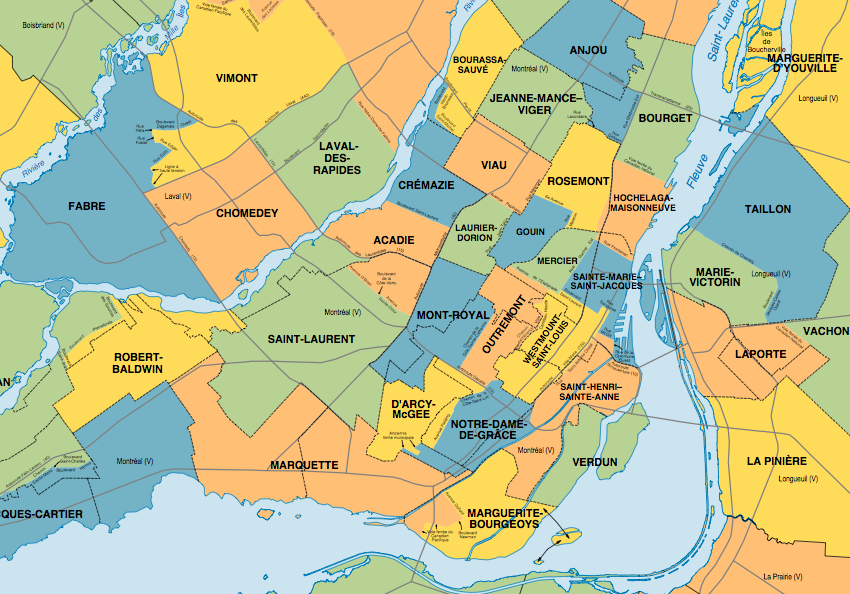 The provincial electoral map of the Montreal region.

Last spring during the federal election I wrote an article about the possibility of Montreal becoming a major battleground region in federal politics. After the ballots were counted this possibility was turned into a reality with over half of Montreal’s incumbent MPs going down to defeat, creating a radically different political landscape. Unfortunately, in the short term the results of the election were negative for Montreal: a majority government that is at best indifferent, at worst hostile, to the interests of our region. But in the mid and long term it can only be an advantage for us that finally no party can take Montrealers for granted and that they will all have to actively work to win our support.

Now with the next Quebec election looming, a repeat scenario is looking more and more possible at the provincial level. Just like at the federal level, Montreal has long been a region of safe seats. The anglophone and allophone ridings vote Liberal, the francophone ridings vote PQ and maybe a few in the middle flip back and forth. This has been our city’s political geography since the PQ’s breakthough election of 1976. Elections in Quebec are thus made in the suburbs and a few swing regions, leaving Montreal often neglected. As a result we get a metro to Laval but no metro to Anjou; a commuter train to Saint-Jérome but no rail link from downtown to the airport; a stadium in Quebec City and an interchange in Montreal that no one in the city wants. But the political scene is changing quickly and it’s looking like we’re in for another paradigm shift.

The biggest change is the arrival of François Legault and his Coalition Avenir Québec. A former PQ cabinet minister, Legault has renounced sovereigntism and has come back into politics as the head of a centre-right, soft-nationalist party. Since the party’s foundation it has been riding high in the polls with a December CROP poll predicting a landslide win of 100 seats. Other, more nuanced simulations based in part on the ADQ’s 2007 high water mark predict a more modest majority of around 70 or even a minority government for the CAQ.

Significantly, all these models, even the more conservative ones, show the CAQ being at least somewhat competitive on the Island of Montreal, unlike its predecessor the ADQ which reached the gates of the city, but didn’t manage to break in. And even if the CAQ falls short, the 20% it could get on the island would be a wildcard in many ridings.

Moreover, as Spacing’s Joël Thibert has pointed out, Legault has made a point of denouncing those who present Montreal and the regions as being in opposition to each other. I am very wary of Legault’s right-wing agenda, which sounds to me like PLQ-lite with a nationalist façade, but I’ll give credit where credit is due. Legault is actually talking about the importance of Montreal as Quebec’s metropolis, unlike other establishment politicians.

The second change is the slow but steady rise of Québec Solidaire. The party hasn’t managed to break into the “big leagues” but since Amir Khadir’s election in 2008 the party has established itself as a legitimate political force that is not to be ignored. It won only 4% of the vote in the last election but these days it’s averaging around 10% in opinion polls. Moreover, it seems probable that after the next elections Khadir will have at least one or two caucus mates, if not more, and that most seats they could hope to win would be in central Montreal. Even if QS isn’t yet on the verge of a Quebec-wide breakthrough they are definitely a significant player in Montreal, maybe even more so than the CAQ.

These factors combine to create a highly volatile political landscape. During the next election there will be four viable teams on the Island of Montreal and as many as two thirds of the city’s seats could be up for grabs, instead of the usual handful. We could see 3 and even 4 way races that would bring seats within reach of parties that otherwise couldn’t expect to be competitive in a given riding. And unlike during the last federal election the political parties know way ahead of time that this will likely be a paradigm shift election and that almost every riding could be in play. They’ll need to speak to Montrealers and make more than the habitual half-hearted effort to win us over. This will finally be an opportunity for Montreal come out of the shadows and play a major role in the future direction of Quebec politics.