Garth Gilker moved in to the third floor of the triplex on the corner of Duluth and St-Urbain street around 1970. An anglo Gaspésien, Gilker says that he picked the apartment because he’d grown up with a horizon and the view of Mount-Royal was the closest he could get in the city.

The triplexes on St-Urban street were in bad shape, but the real estate office that he dealt with in lieu of the landlord barely bothered to make repairs. “This old guy would come by and take a piece of wood off the neighbour’s house and put it on mine,” Gilker recalls. It was assumed that the buildings would eventually be demolished and redeveloped.

Demolition was in the air-du-temps, but so was citizen resistance. Milton-Park citizens were mobilizing  to halt La Cité; St-Norbert residents were protesting their own demolition, and Berri street residents managed to cut the Berri highway plans off atRoy. St-Urban street triplexes were coming down as well: Gilker says that there were once 85 civic addresses on his block where now there are sixteen.

One day in 1975, Gilker came across a demonstration led by “Save Montreal,” the group that later became Heritage Montréal, against the demolition of the buildings on the east side of Bishop street. He asked one of the demonstrators what could be done to save his block and was shocked by her reply: “That old plumber’s shop? It’s so bad, forget it!”

Soon after, Mr Shanks the plumber passed away. Recalling how the Save Montreal activists had been so disdainful of his building he thought he’d better try and clean the place up. Gilker called the real estate office and they offered him the ground-floor shop for $50 a month. Impulsively, he decided rent it out, and got to work clearing out the old junk and re-painting.

Over the winter, the idea for the café was born: Gilker figured that if the café became popular he’d be able to get his clients out in the street to demonstrate against an eventual demolition. When Saint-Jean Baptiste day rolled around, and the mountain was packed with partyers, he decided to sell sandwiches in order to make a little extra money for the renos.

Later that summer, he put in a couple tables and opened a clandestine terrace in front of the building. Terrace permits were virtually non-existant at this time, so Gilker improvised by throwing down some railroad ties, filling it in with earth, and making patio stones, tables and seats out of tree stumps. When the inspectors came by, he’d tell them “there’s no tables and chairs there – it’s a garden.” 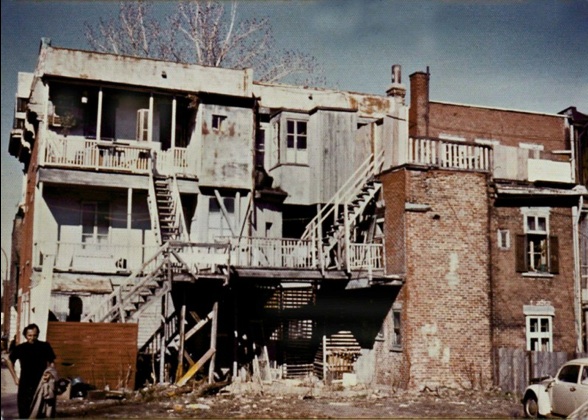 He also began landscaping a back garden with stones and a little pond, thinking that the greenspace could give them extra clout against demolition. Fortuitously, this attracted the attention of the Soeurs Hôpitaliers de Saint-Joseph, who run the hospice next door. It turns out the order of nuns actually owned Gilker’s building and 4 neighbouring triplexes. The nuns eventually sold the five buildings as a co-op, and some of the sisters even moved in for a time. “They helped us out financially and in so many ways,” Gilker says.

In the 1980s, the co-op’s owners started seriously renovating the block more thoroughly, as some of the buildings had been completely abandoned. The city’s penchant for demolition had it’s up-side: Gilker was able to scavenge pressed tin from buildings like Murray Sports and Woolworths that were knocked down when McGill college street was widened. The ornate polished wood sandwich counter was cobbled together from maple and oak doors found discarded in an alleyway. 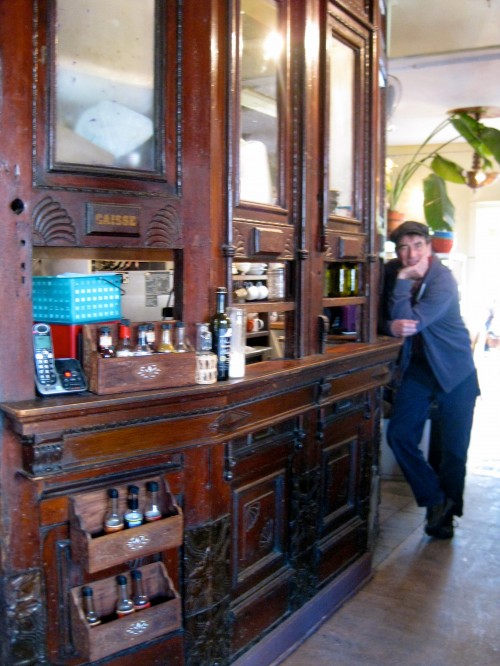 Today, Santropol has become a beloved institution and the Gilker’s block of St-Urban street falls within Mount Royal’s protection zone. Gilker is still working to improve the back terrace: this summer he plans to put in a vegetable wall, a stone outcropping to act as a stage, and maybe even an occasional farmer’s stand.

But he attributes the restaurant’s success to it’s community-building motive: “I didn’t open the café for business purposes,” he says. “It has a raison d’être – it did save the buildings…That’s an example of how food can change a place.”

This post is part of a series of articles examining the relationship between food and urbanism, leading up A Taste for Montreal, an event in collaboration with Spacing Montreal, Avenue 8 and the CCA, which takes place on April 5th 2012. 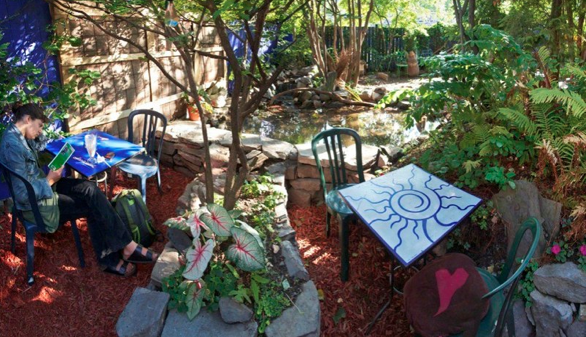