Last week I wrote about how, after three years of volunteering with Dans la Rue, I came to see Berri Square as one of the few places where Montreal’s homeless and marginalized people find common ground with more fortunate Montrealers. I concluded by saying I believe that people who are visible will tend to be better citizens.

From Gotham City to Metropolis?

Yet it seems that many Montrealers want nothing more than to put the homeless out of sight and out of mind. Earlier this month, the mayor recommended shortening the Ste-Catherine pedestrian zone to exclude Berri Square from the seasonal festivities, citing police concerns about safety around Berri Square.

And last November, when Warner Brothers opened an studio in the tower on the East side of the park, the studio director compared Place Emilie-Gamelin to Gotham City, home to Batman and well-known for it’s dark atmosphere, crime, corruption and decay.  Naturally, the studio announced that they hoped to make the neighbourhood “less like Gotham City and more like Metropolis,” Superman’s world-class city. And he was clear about the demographic change that would imply.

So on one hand they’re trying to keep festival-goers and terrace-hoppers away from Berri Square while on they other, they would push out the homeless and marginalized people who do use it.

This unwillingness to find common ground is even more shameful when you consider the 170-year-old tradition of providing help and resources to those in need at Berri Square.

A place for Montreal’s homeless since 1841. 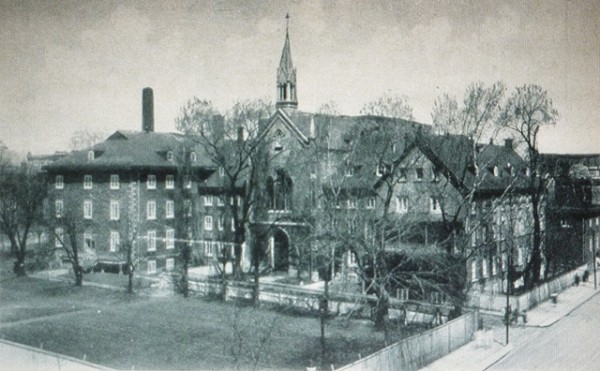 Montreal’s down and out laid claim to Berri Square long before the shops, hotels, bus station, university or even the church were established. In 1841 Emilie Gamelin founded a hospice called l’Asile de la Providence in the very same spot. Its main purpose was to provide sanctuary for elderly women, but the nuns who ran the charity also handed out hundreds of meals to the poor and homeless every day. In 1844, a wing was added along Ste-Catherine Street to house 50 orphans. But after 120 years of service, the hospice came under the developer’s axe: the City bought the land in 1962 and razed the building in order to excavate the Berri-UQAM metro terminal.

From Square to Parc to Quartier

The lot then sat empty until 1993 when it became Berri Square. and three years later, it renamed Emilie Gamelin Park. While the new name honoured Gamelin’s work with the poor, it hid a more subtle and far-reaching implication: as a park, the city was able to enforce a curfew in the space from midnight until 6am.

In protest, 250 punks and street kids camped out overnight in the square. A flyer promoting the demonstration read: “As the corporate monopoly on land continues to grow, our free public spaces become fewer and fewer…Such is the story of Berri Square. Once a place for all, now closed for business and open only to the well-groomed.” Riot police arrested 70 people and fined them for breaking the curfew, which still remains in place today.

A further bylaw in 2006 banned dogs from Parc Emilie-Gamelin and Viger Squares, which some interpret as a blatant message that street kids are unwelcome in these public spaces.

But there remained at least one occasion each year when the curfew was broken: ATSA’s annual État d’Urgence, a 3-day event that aimed to bring together homeless and the general public, in a festive atmosphere of free food, artistic performances, and urban camping. But in November 2011, the festival’s organizers wrote an open letter to Voir, explaining that they were unable to get funding to sustain the event:

État d’Urgence is an example of how programming a public space can be inclusive of more marginalized people (I blogged about the 2009 edition here). Sentier Urbain has created another inspiring model for shared public spaces. With Berri Square set to be revitalized beyond recognition, I argue that a common ground, where the homeless can be visible and find help when and if they want it, is part of our city’s heritage that is worth preserving.