A special contribution by Henry Gass 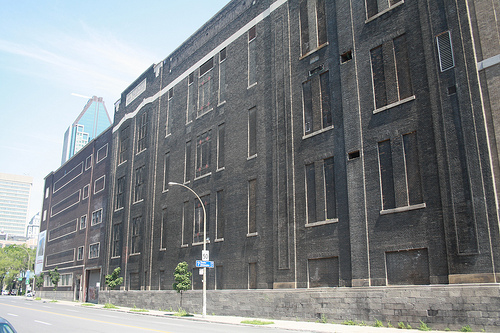 The former Dow Brewery, at Peel and Notre-Dame.

A new project designed to ignite a lucrative innovation industry south of downtown Montreal also hopes to succeed where handfuls of developers have failed in recent years: revitalizing the Griffintown area.Yet despite securing over $1 million in funding and entering its pre-launch phase earlier this year, very little is known about what will comprise the “Quartier de l’innovation” (QI) project.

A joint venture led by the École de technologie supérieure (ÉTS) and McGill University, the QI aims to host professors, researchers, students, and businesses in a “living laboratory,” spurring innovation.“You will have access in that very close neighbourhood to institutions, to students, to knowledge, to craft, and to other businesses,” said Olivier Marcil, McGill VP External Relations. “Innovation, you create this with contact with people.” Griffintown residents have been exposed to the project as part of consultation carried out this year regarding Griffintown development in general by the Office de consultation publique de Montréal (OCPM).

The area has been plagued in recent years by multiple attempts at revitalization, most notably the ongoing and embattled “District Griffin” project headed by developer Devimco. Jeff Dungen, spokesperson for the Committee for the Sustainable Redevelopment of Griffintown, is concerned the glut of development projects could stunt the areas continued growth. “From [the OPCM consultation] it was clearly stated that there has been absolutely no coherent planning between the [borough] and the City of Montreal for the neighbourhood. There still today is no plan,” said Dungen.

The Griffintown skyline is crowded with new condo towers and construction cranes. “It’s all condos, no commerce,” said Dungen. If complementary services aren’t factored into development projects, he said “then you’re stuck building all that stuff retroactively. Condos and educational institutions don’t necessarily have complementary needs…so when you have this planning in a vacuum where no one’s talking to each other, what you end up with could be a total pile of shit, honestly.”

Both ÉTS and McGill insist this will not be the case with the QI. While McGill only came on board recently, ÉTS has been developing the project since 2009. ÉTS spokesperson Olivier Audet said the project will emphasize the “importance of a [diversity] of services.” Similar innovation districts have been developed in cities from Barcelona and Lyons, to Boston and Toronto. Marcil said he thinks the QI will improve on the social aspects of past projects. “The social part or character of that neighbourhood in Montreal will be unique across the world, no doubt about it,” said Marcil.

ÉTS has already purchased one building for the project, the former Dow Brewery building on the corner of Peel and Notre-Dame. Marcil said McGill was “looking at” possibly buying property. The two schools are also still in the process of finding corporate partners for the project – businesses that would sponsor the project and take up office space in the district.“Students, staff, researchers could go there and have an opportunity to be in contact with SMEs and projects,” said Marcil.

The project drew criticism from McGill students in February when it was first publically revealed, without prior consultation. McGill students were also critical of potential corporate ties within the QI project. McGill included Bombardier, Google and Monsanto as possible corporate partners in February, a list the McGill Daily later reported was “purely hypothetical.”Marcil said McGill will also begin consultations with students on the project in the fall.

Steeve Lemay, an education consultant and Griffintown resident who participated in the OCPM consultation, supports the “initial intention” of the QI project, but is worried the project appears to offer little to families. “It’s a few young professionals who are involved in the process,” said Lemay.Lemay said he would like to see science and technology-focused primary and secondary schools associated with ÉTS launched as part of the QI, providing the example of the École FACE neighbouring McGill. “There are ways in the Quartier de l’innovation to create a neighborhood that is not only for the bourgeois, not only for people in the area promoters attract,” said Lemay.

Dungen was critical of ÉTS past involvement in the neighbourhood, however, saying the school sees the neighbourhood “as an opportunity”. He continued saying, “I wouldn’t say that ETS is a big champion of the neighbourhood, apart from anything that makes it sound like they’re really great. If you walk on William Street, which is really the border of Griffintown, all their buildings that face out on there absolutely couldn’t give a shit about the neighbourhood.”

Marcil said McGill and ÉTS expect the project to develop over decades, possibly for up to 25 years. He added that they don’t want to make “the mistake of going very quick and behind closed doors.” Given the recent history of development in Griffintown, however, residents remain sceptical. Both Lemay and Dungen added that the OCPM’s recommendations don’t have to be observed by the city and developers. “It’s a bit sad,” said Lemay. The process is good, but when in fact it is negligible, it’s ridiculous.”

Re-zoning is one area where Dungen said the authority of the OCPM recommendations could play an important role. “One of the big question marks with Quartier de l’Innovation is: what are they actually trying to build?” said Dungen. “If it requires a change will they respect the recommendations and wait for there to be a plan before they go ahead?” Audet said there are no re-zoning plans yet for the project, confirming that the two schools are still developing an overall business plan for the project.