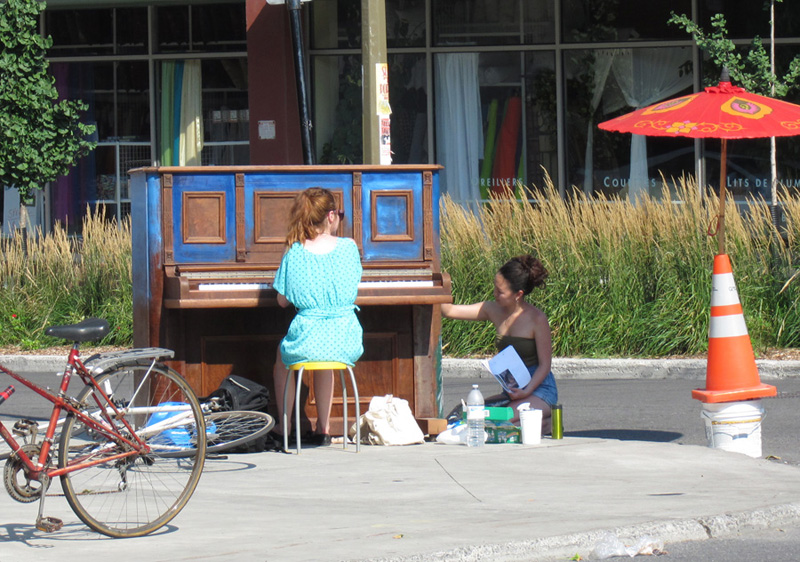 When taking a stroll through the Plateau during the next month, don’t be surprised to find yourself stumbling upon a beautifully aged, painted piano on one of the neighbourhood’s street corners.  Last week, the city launched the community-based initiative, “Piano des villes, piano des champs” – the first of its kind in Montreal.  Based on the “Play Me, I’m Yours” concept, two pianos painted by local artists have been planted on the streets as a way to encourage dialogue amongst community members, as well as interactions between individuals and their urban surroundings.

I was fortunate to be invited by Les Amis du champ des possibles to paint the piano in the Mile-End, a process which consisted of sitting under the sun for two days transferring ACDP’s written research on the existing biodiversity in Le Champ des possibles (which ACDP advocates to protect) into visual language and onto the piano, while interacting with curious passersby.  For those of you who have been to the corner of Casgrain/St-Viateur, you’re probably familiar with the area’s spacious, industrial, and quiet qualities, which usually provide little opportunity for intimate interactions among strangers. Yet, it was clear that the presence of this piano stirred curiosity, excitement, and confusion from people passing through, giving life to such occasions as individuals came together to express their thoughts on the project. 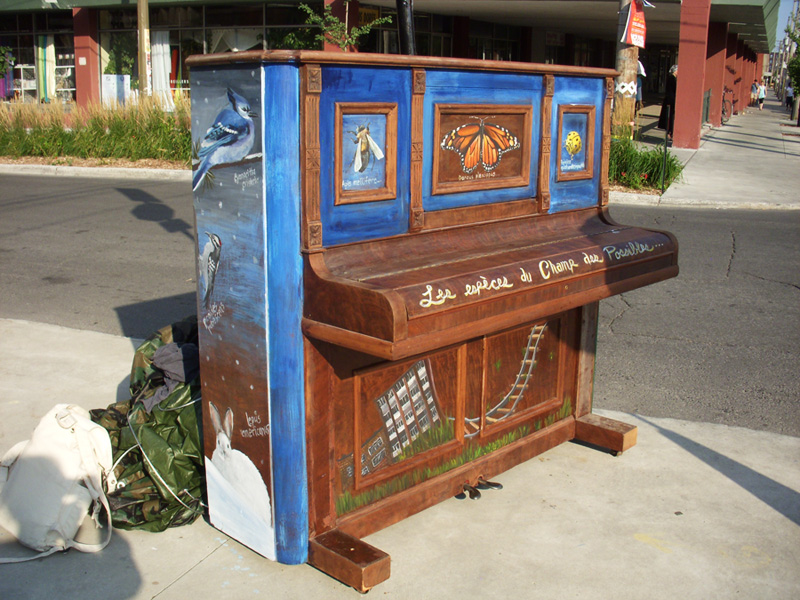 The painting on the piano located near the Champs des possibles in Mile End shows some of the animals, plants and insects found in the field.

Although I have always viewed the Mile-End as a place with a unique community spirit, I was still pleasantly surprised by the constant delightful interactions in which I found myself with people walking, biking, and driving by.  Apart from the countless friendly individuals who stopped by just to say “Good job!,” a man who worked in the adjacent building kindly offered me a delicious homemade brownie, another person thoughtfully constructed a DIY sunshade system to help protect me from the heat, local artists stopped in their tracks to share their own artwork with me, and a few individuals stopped to play the piano, including local singer-songwriter Gabriella Hook. As small crowds gathered around the piano-players, the street corner was reshaped into an intimate performance stage.

That is to say, even before the official launch of the project, it was evident that the pianos were able to meet their objective of generating dialogue within the community.  And it excites me to think that what may merely appear to be a peculiar scene of a piano on the sidewalk will in fact act as a catalyst to the birth of new experiences and new relationships among community members in Montreal’s urban setting.