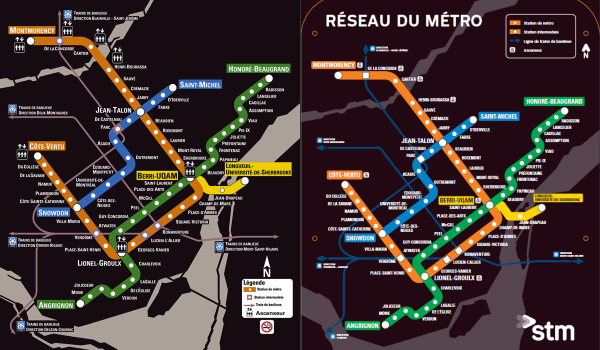 Before and after of the old and new map (by Kate McDonnell at Montreal City Weblog. Click for higher resolution)

The new map varies little from the old one, most changes are aesthetic, bringing the design in line with the rest of the STM’s promotional and (non-permanent) wayfinding material.

Changes include the use of the STM’s proprietary font (except for the station names which remain in Univers, the same font used to communicate the station names on the black “ribbons” on station walls), elevator symbols are placed beside the station names (the STM seems to have forgotten that Bonaventure now has an elevator), a simplified and darkened shoreline, and darker colours indicating AMT commuter trains. The new STM logo is also used and the no smoking symbol has finally been removed.

The Gazette interviews graphic designer Cameron Booth, who, on his Transit Map blog referred to the map as “so distinctive that it couldn’t possibly be from anywhere else in the world than the city it represents – and this is definitely all Montréal’s.” Booth laments the loss of the purple colouring of the commuter train lines for the less conspicuous dark blue which makes it more difficult to see. Upon seeing the printed map in situ, the darker water is also much harder to see and makes it difficult to orient the metro lines in reference to the water. The removal of the bridge silhouettes creates a similar problem.

The map is nice but perhaps we could have opted instead for this 8-bit, Super Mario version by Dave Delisle, a free-lance artist from Vancouver: 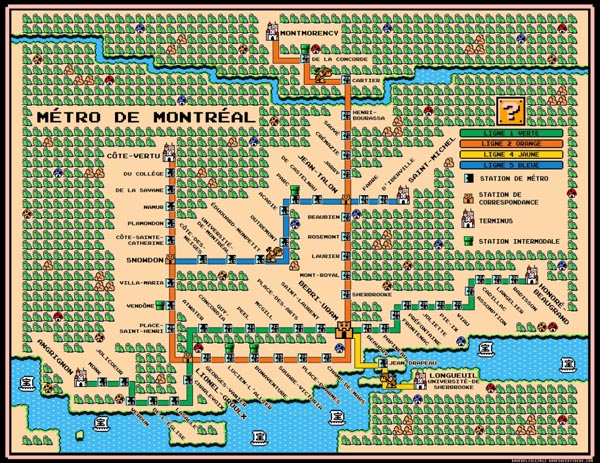