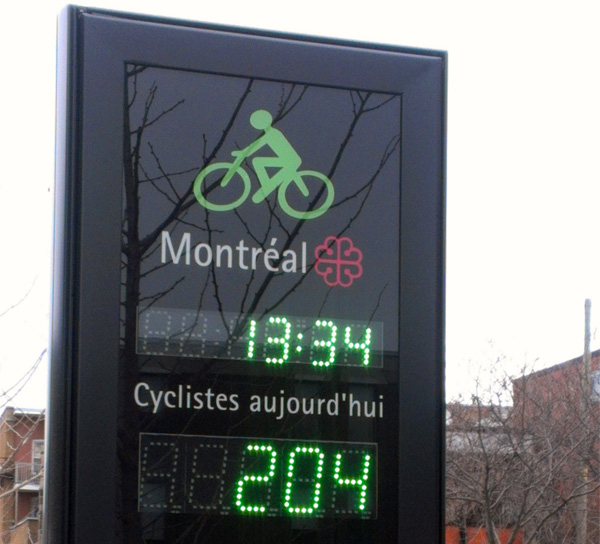 I got my first bike ride of the year in today and was pleased to notice this flashy new bicycle counter in front of Laurier metro station.

In 2011, I interviewed Jean-Francois Rheault, North American director for Eco-Counter, the company contracted to develop the bike-counting technology for the City of Montreal. He pointed out that, since bikes tend to be quiet and take up relatively little space on the road, engineers sometimes underestimate the number of cyclists using the bike network by a factor of 10 – 100!

So is it any surprise that citizens with even less experience in transportation design can be found grumbling about the resources invested in cycling infrastructure, that appears to cater to a small minority, while traffic continues to snarl in the streets?

In response, the “eco-totem” helps educate the public by displaying the total number of bicycle trips per day and per year, all in real time. Early this afternoon I got a little thrill as I coasted over the double-diamond in the pavement and saw the count go up to 204 bike trips – not too shabby for a warm weekend in March. Rhéault told me that in 2011, they counted over 2o00 trips per day on Laurier street in the summer, and that was while the bike lanes were still undergoing construction.

The new bike counter also keeps an annual tally, designed to record up to a million trips this year.