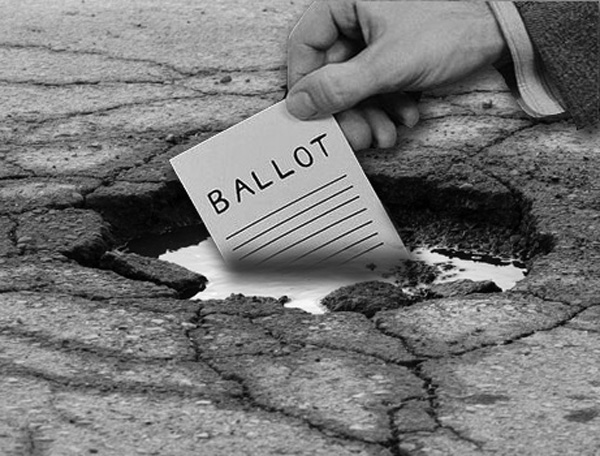 Calling all Montrealers: get out and vote! Scratch that: stay in and vote!

Alas, the municipal elections have not come early, but for the first time in my memory (and quite possibly the first time in history), the Mayor is inviting Montrealers to express themselves on a tough decision facing the executive committee: Potholes or corruption?

The City of Montreal’s pollexplains it as such:

Every year the city faces a reoccurring problem: potholes. This year will not be different than the others. In January the city launched a call for tenders to purchase asphalt in order to repair potholes. The $5 million contract has been won by seven different companies based on their bid and their geographic location. Some of the companies that won have been the subject of many allegations and news reports.

Elected officials of the city Montréal must vote on the contract. Under the circumstances the choices available are not to be taken lightly.

The contract can be granted all the while knowing that we are dealing with companies that might not have a very enviable reputation.

We can refuse to grant the contract knowing that there will not be any asphalt to fill in potholes after April 15, 2013

I’m inviting you to answer:

It may seem laughable (Montreal politics do seem to reach hilarious new lows on a weekly basis), but this is important! It’s a shame about the systemic corruption, they are telling us, but are you really willing to be inconvenienced by a change in the status quo? The issues is being framed so as to make us believe that what’s in the best interests of 7 construction companies and their cronies at city hall is in the best interests of citizens. But there’s got to be another way.

I am not an expert in construction, but I’m willing to bet there are more than 7 companies in Montreal – nay the country – that can produce asphalt.

I am not an expert in asphalt, but I’ve heard that there are substance that can fill a pothole for more than one measly year; that there are ways of building roads that are a little more environmentally sustainable and lead to lower maintenance costs in the long-run.

And I’m not an expert in public relations, but Montrealers are going to look really pathetic if we explicitly vote in favour of organized crime over potholes.

So let those cracks and gaping holes in the pavement be a reminder that our system of government is broken.