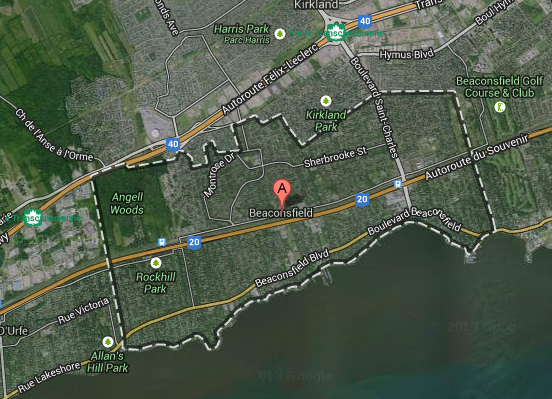 Angell Woods is one of the few old-growth forests and wetland areas remaining on the island of Montreal, undisputedly, an area of significant ecological value. The 2011 Metropolitan development plan (PMAD) aims to increase protected areas in Greater Montreal from 9% to 17%, with a focus on conserving of forested areas and wetlands.

Should be a simple equation, right?

Currently, just under half of Angell Woods is owned publicly, by the City of Beaconfield, the City of Montreal, Transport Québec, as well as by Ducks Unlimited Canada. The majority of the land is held by private owners, including a real estate developer (source: APAW memoir, PDF) and is zoned for residential use although, since 2010, an interim control bylaw has put a hold on development and the private lands are valued at $1 for taxation purposes.

Covering 85 hectares, between the highway 20 and highway 40, Angell woods represents about 13% of Beaconsfield’s territory. The town of Beaconsfield, a wealthy suburb with about 20,000 residents, says it doesn’t have the resources to buy up and protect the remaining land.

To the rescue: the City of Montreal is ready to back the preservation of this site of regional ecological importance. Montreal officials contacted the landowners this summer, who expressed interest in selling their land for the conservation project.

But now, just a month before Beaconsfield will hold elections, the town has presented a plan to allow condo development within a 200-metre wide strip near the commuter train station. While talks between the City and the landowners had barely begun, the sudden decision to put development back on the table will be a game-changer in terms of negotiating with the landowners.

“The solution that was at hand would have delivered a fair exit to the last remaining landowners and would have allowed Angell Woods to be saved in its entirety,” writes Sylvia Oljemark, a member of the Association for the Protection of Angell Woods. “Not only did they not work actively to pursue that opportunity, it now appears that this past summer they managed to sabotage the efforts of the City of Montreal to save the Woods.”

The precarious situation of Angell Woods demonstrates a need for regional governance structures that can facilitate coherent decision-making when it comes to ecological conservation and other metropolitan scale issues.