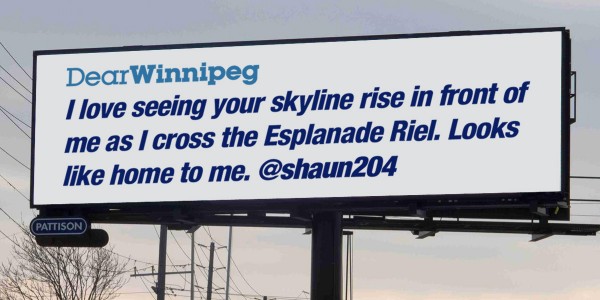 Do you love your city? Or perhaps your feelings are more complex? If you can fit it in 140 characters, we want to share it with the rest of Canada on a billboard as part of a new public art project. Your voice matters. Join other urbanists in a public dialogue about the issues affecting our daily lives in the cities we inhabit.

Start your tweet by indicating your city. For example “@DearCityCanada Dear [name of your city] …”

Public space is no longer only comprised of physical structures; it’s now a place where the complex interaction of physical and electronic spaces happens. Public screens  and digital billboards offer new sites for public conversations to happen.

Only letters to the digital billboard location cities will have a chance of being seen in those cities. Other Dear City letters will have the opportunity to be seen in malls across Canada.

(Due to Quebec french language laws, letters to Quebec cities must be in french.)

*We can’t include letters that violate the Canadian human rights act, are libelous or slanderous, give out personal information, or include profanity.