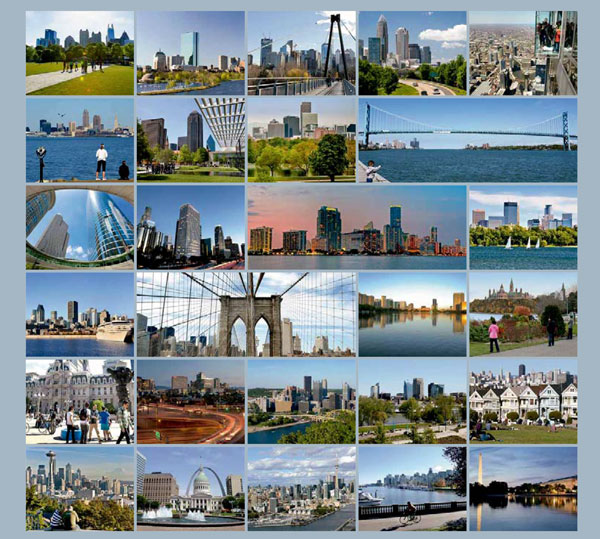 Mirror, mirror on the wall, which city is the greenest of them all? More than 80% of Canadians are living in cities – and this number is expected to increase in the coming years. In an era when environmental issues are of popular concern, which Canadian city is the greenest? The Economist Intelligence Unit, sponsored by Siemens, conducted a research project, which resulted in the Green City Index. Based on 9 evaluation criteria (CO2, land use, energy, buildings, air, transport, water, waste, and environmental governance), the study ranked 27 major Canadian and American cities from best to worse. Let’s see which Canadian cities scored big green points and why.

French Canada’s biggest and most vibrant city did not excel in the Green City Index. Despite being the most bicycle-friendly city in the country and having its public transportation system named best in North America, Montreal needs to work on energy consumption per capita (58 gigajoules per person, versus the average of 52), water consumption (293 gallons per citizen, compared to the average 155 gallons!) and the funding of environmental initiatives.

Surprisingly, Calgary is fairly green. Out of all 27 cities evaluated, it ranked first in water management. The city’s water distribution leakage is only of 4%, which is much better than the average 14%. Also, compared to the average 155 gallons of water consumed per person per year across Canadian cities, Calgarians consume a mere 113 gallons of water on average. The city still has to work on its air quality, though, and on its transportation system.

Our country’s capital has a fairly decent green score. Ottawa’s most important green assets are its land use (vast amount of green spaces and low population density), its good public transit system (used by 28% of workers, more than double the 13% average), and its low CO2 emissions. On the not-so-bright side, the capital does not have enough LEED certified buildings and should improve its environmental governance (green action plans and management, funding, etc.).

The largest Canadian city did pretty well. With 7.2 metric tons of CO2 released per person, Toronto is comfortably below the 14.5 average. Also, Torontonians do not consume as much energy (40 gigajoules per person – the average is 52). It is also worth mentioning that 44% of the Toronto waste is recycled, while the average is 26%. Like Ottawa, Toronto is lacking in environmental governance and could raise its green rating by improving its land use.

Undoubtedly the greenest city in Canada – and by far –, Vancouver is praised for the quality of its air (ranked first in all 27 North American cities, with 4,02 metric tons of CO2 emission per person), its transportation system, its land use (12% of the territory is green, which is remarkable for a city with such high population density), the management of its waste (55% of the municipal waste is recycled – 26% is the average!) and its overall environmental governance.

Julia Taylor is a writer, globetrotter, nature lover and cycling enthusiast who tries to fully appreciate every single thing life throws her way. She works as a freelance blogger for Le Yeti, a Montreal-based bike dealer.