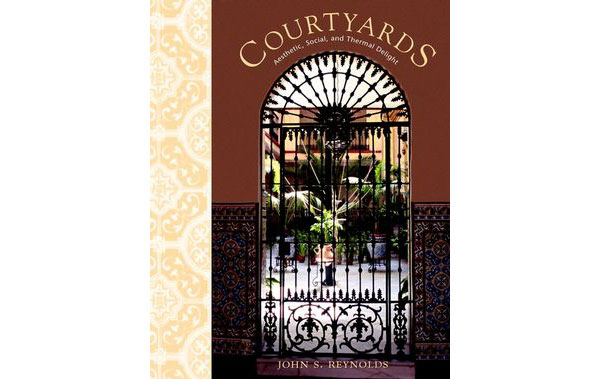 Courtyards: Aesthetic, Social, and Thermal Delight was a different book for me, and I say that with a vastly eclectic collection of books on my young shelves. I carried it around for two weeks, sticking pink sticky tabs to pages that interested me in different ways.  When people asked me what I was doing I would say I was reading about courtyards, which usually lead to a pregnant pause followed by the obligatory, “is it any good?”  It was here that I began to think to myself, “is this book really any good?”…….and the answer was, surprisingly, yes!

But before describing the strong points, I should start with discussing a specific aspect that I felt detracted from the book—that is, that it had difficulty reading as a cohesive whole. This is due to the interaction between the nature of the content and structure of the book. It began with a preface, moving into three sections—Courtyard Characteristics, Some Particular Courtyards, and Courtyard Design— each of which were further broken into chapters within their respective themes, such as Classifying Courtyards, Social Roles, Variations in Proportions etc.

Although the above makes sense insofar that it allows the individual to follow quite clearly at the broader level, it lacked a cohesive sense of synthesis as one read through the book. This is coming from the perspective of a  laymen in all aspects of courtyard design. I have never researched it, never really learned about them prior to this, and I have really only visited a few myself, mostly in South America. So while this book contains a plethora of amazing information regarding courtyards of every shape and size, the nature of the information and data included don’t seem to work together. A more detailed description will highlight why.

The first section—Courtyard Characteristics—is extremely poetic. The author wastes no time spinning wild and beautiful tales about courtyards, and what elements change our perceptions of these spaces. He discusses water and its psychological and physical effects on the environments, but continues talking about water in a courtyard with a personification that would make any poet scream in ecstasy.

The information within Some Particular Courtyards is such that it is hard to pull anything from it other than a collection of journalistic events, however. He speaks to specific courtyards, in specific areas (such as Mexico and Andalucia), and his time within these spaces outfitting them with sensors that track a number of variables. The poetry and fluidity of the book gets lost quite quickly halfway through this section, as he makes a large and pragmatic jump to the third part of the book—Courtyard Design—where he outlines forty-four design considerations for courtyards.

Each individual part (save perhaps the second) is filled with beautiful verbal and photographic imagery, as well as extremely technical information. However, speaking to the fragmentation I referred to above, the content seems like it requires more integration to fulfill its true potential.

By the time I had reached the information section of the book, to learn about specifics when designing a courtyard, I felt that all the poetic magic in the early sections had receded into mathematical equations on comfort and “coolth”—which he defines as “the opposite of heat…”—which ultimately took a bit away from the design aspects of these beautiful spaces. A slight re-structuring that didn’t isolate each section so clearly, such as two pages of concept drive information and three/four pages of hard data with ample photos and diagrams, would have easily solved the issue.

This aside, however, the book is a wealth of knowledge. Not only does Reynolds break down major differences (depth vs. width, choice of materials, climate) he also focuses on extremely small details, such as the psychology of water mentioned earlier. He gives sunlight data with a precision and comprehensiveness which I have yet to see in an other architectural book on the subject, despite being overly technical at times.

Furthermore, Reynolds’ strong passion for the subject is clear and inspiring as one reads the book. This comes through explicitly in his plan drawings that locate his sensors down to what appears to be the centimeter, allowing the reader to really see the lengths he went to gather evidence towards amazing qualities possessed by courtyards.

For someone who had no idea about courtyards, I was thrilled as I read through Courtyards: Aesthetic, Social, and Thermal Delight, and I mean that literally. It isn’t a topic that is touched upon much in Canadian climates, so I was fascinated to learn about them and see how well they have worked in other climates. Although it paints a picture as to potentially why we have tended to stay away from them to-date, it also raises theoretical questions about the possibility of courtyards in climates such as ours.

Overall, the design considerations were great, and although I beleive the content could have been tied together more cohesively, I think the book is a perfect starting point for anyone who reads this book to begin to synthesize their own ideas on courtyards and their impact on society. Although it was a bit tough to get through some of the technical data, it was simultaneously stunning and melodic. As such, Courtyards: Aesthetic, Social, and Thermal Delight is well worth a look.

You can read more on Courtyards: Aesthetic, Social, and Thermal Delight at the Wiley website.