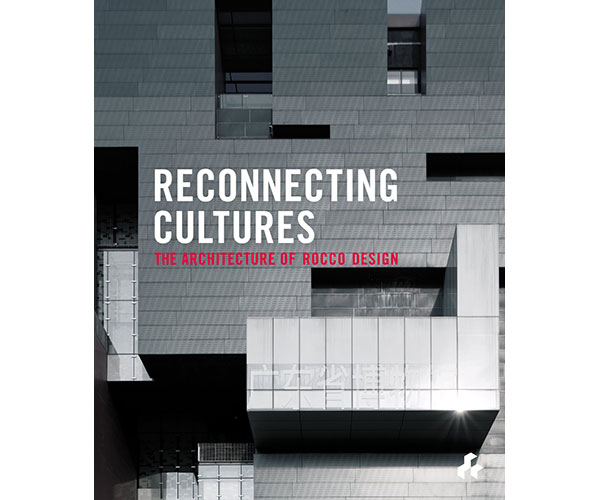 I have to get it off my chest before delving into this article: every time I this book it out of the corner of my eye while I was reading it, I saw “The Architecture of Rococo Design” which obviously is not the title, and the design work featured within Reconnecting Cultures: The Architecture of Rocco Design, is far from Rococo inspired. It is a magnificent and poetic journey through the mind of an architect and his firm doing very intriguing work with an emphasis on China and its dynamic culture.

The book opens with an introduction by Rocco Yim, followed by a sampling of essays related to his work by Fumihiko Maki, Kenneth Frampton and Sir Peter Cook. In his introduction, Yim outlines his philosophies toward design and architecture, and culture in general. He focuses heavily on the culture of our time, but also on the culture of China as it has progressed over the years.

The style of Rocco Design is very modern, with a Chinese historical flair. He focuses on issues which are important today, and then follows these through to the most minute details. For instance, his Distorted Courtyard House, a commune by the Great Wall in Beijing, is a testament to the old world Chinese dwellings, where multiple generations of family live in one home. However, it has been reconfigured to work in a modernist fashion, with a beautiful central courtyard and varying levels of exposure to the elements through walkways around the compound.

He focuses heavily on how people are going to interact with the spaces, civically as well as personally. The HKSAR Government Headquarters in Hong Kong, addresses everything from interiors to the architectural statement, to sustainability, to urban planning and landscaping. The way the building is designed is meant to augment all these other avenues which is the sign of truly integrated thinking and execution—a testament to thorough and detail oriented design work. Yim believes in a fabric of people interconnected within the urban core of China, and throughout his projects he aims to make the most of each of these interactions.

One of the issues I had with the content—reoccurring problem in many books on architecture—is that the interiors are often shown  as void of life. There are specific project renderings where the interior spaces are grand, but empty and it makes me wonder what the purpose of such a large space is when there appears to be no defined reasoning behind it. I know that Yim puts a hefty amount of thought into these spaces, but it didn’t translate through the many renderings and photos. Instead, it left me trying to figure out how the interior spaces would function.

Over and above this little caveat, I thoroughly enjoyed this book. The visuals are stunning. Be it the photography of a finished project, the 3D rendering to break down the functions of the spaces, or the quick and messy hand drawings for conceptual work, Reconnecting Cultures: The Architecture of Rocco Design displays it all with simplistic grace. These are continually reinforced by their philosophical explanations, something that is not as common in architecture books as it should be. Instead of letting the photos do all the talking, Yim strongly reinforces his points, and this never becomes overbearing.

From start to finish Reconnecting Cultures: The Architecture of Rocco Design was magnificent in what it accomplished as a book, but even more so as a milestone in an architects career.