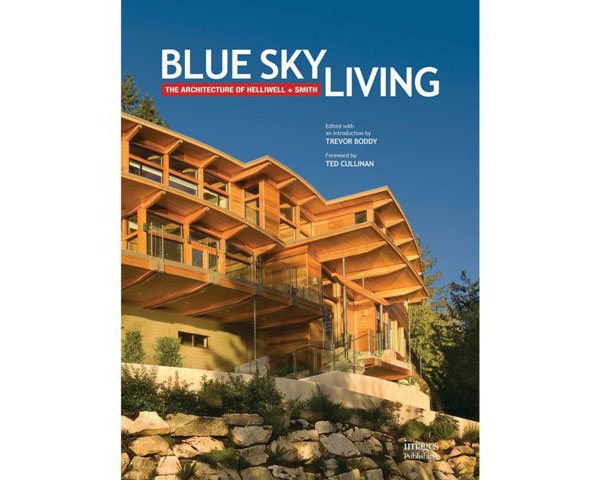 There is a singular, sinuous line of fine houses shaped by Kim Smith and Bo Helliwell through some of North America’s most dramatic landscapes. Like a woodwind solo drifting through a mountain valley, these houses play a dramatic melody marked by theme and variation in cedar, stone, and timber beam. The continuities of texture, layout, and outlook between these houses are quickly evident, but more interesting are their differences, the dappled reflections, the unexpected echoes, and the layers of architectural sound drifting through the trees.

With its successful launch this past June sponsored by the West Vancouver Museum, Blue Sky Living: The Architecture of Helliwell + Smith is the much overdue monograph of this Vancouver-based architectural phenom, and is most formidable in both the narrative provided by Trevor Boddy and the stunning photography accompanying his text.

With a foreword by British architect and Honorary Fellow of the RAIC Ted Cullinan, this awe-inspiring book offers us an excellent perspective into Kim and Bo’s modest-sized practice, with over 300 colour image and illustrations of the wonderful projects their office, Blue Sky Architecture, has seen to fruition in its close to 40 years.

Featured prominently in the recent architectural documentary Coast Modern for their contribution to West Coast Modernism, the influence of their former employer Arthur Erickson is all but evident in the rhythm of their trabeated structures, though rendered more playful and curvilinear in their expression of cedar logs and undulating roof planes. Still the same as their late master, the reverence of site is carried forward, along with the relationship of inside space to outside, making the communion with nature the very raison d’etre of these buildings. While Trevor likens their architecture to a melody, theirs is also the sound of the wind and seashore, or the distant call of the melancholy loon in the night, situated in their settings as perfectly as they are.

In Ted Cullinan’s foreword, he refers to the couple as true critical regionalists, noting how their buildings could not be anymore appropriately suited to their sites in both their purpose and repose, as well as being respectful of the great rain forest on the edge of which these modest houses find themselves. As Ted rightly points out, “there are places within a few miles of Vancouver’s suburbs where no human has ever set foot.” This great white north, that we gravitate to as much as we shelter ourselves from, is perhaps part of our national identity, and something which Mr. Cullinan has pointed out is very much present in Bo Helliwell and Kim Smith’s work.

He goes on to point out that while he admires their residential architecture in the way it responds to its setting, he likewise applauds their Ucluelet Aquarium in the way it responds to its more urban environs, standing out as it does from the frontier town’s prosaic, ordinary structures. “I would love Bo and Kim to design more public buildings, maybe even in downtown Vancouver, for their aquarium shows a great talent for dealing with existing built places.”

Trevor builds on this in his introduction, explaining how in the fifteen years he’s known Kim and Bo his appreciation of their houses has evolved from one highlighting the things they have in common – their use of wood and glass, their locale, their fantastic views – to an appreciation of the subtle differences between them. To this end he has placed the nineteen projects in the book into six categories – Narrative, Place, Structure, Tectonic, Systems, and Community – presenting them thematically in order to appreciate these distinctions.

The connective tissue between them all is what Trevor calls the “life well lived,” such that each project has an emotional grounding, and consequently, creates empathetic places for their clients. This, he believes, is the secret ingredient in Blue Sky’s architecture: what it is that enables them to connect with their clients in such a way that to strip anything away would be criminal, to deny that which is greater than the sum of its parts: “Bo Helliwell and Kim Smith have an uncanny sense to get at the sense of what clients are really looking for in their lives, and deliver a portion of it as architecture.”

Trevor’s introduction almost upstages the projects selected for the book, containing as it does a hidden track of three additional houses, those currently owned and seasonally occupied by the very architects who are the subject of the book. This real-time narrative of client as architect and architect as client turns out to be the perfect point of departure for the rest of the content, reminding the reader that these are private homes, and that the privacy of the client – and in some instances outright isolation – is part of their own definition of ‘the life well lived’ that Bo and Kim have given them with their architecture. While the fantastic views to their environs might make them seem open and airy, they are also a retreat and sanctuary for their occupants, as well as shelter from the elements.

Of the beautifully photographed houses in Blue Sky Living: The Architecture of Helliwell + Smith, one standout is Fishbones House, whose central spine twists to inflect the roof and create in one simple gesture all the spaces for the home. Also featured are some of the early homes they designed on Hornby Island starting in the 1970’s, shortly after leaving Erickson’s office. These first simple and more modest homes, like the Dunlop Point, Bench Spiral, and Gullwing Houses, show a sense of exploration in materiality and space, reveling in the dialogue between the two like a melody and its counterpoint. And as evident in the newer houses realized on this side of the new millennium, they would be testing grounds for the larger ideas that reveal themselves in such breathtaking creations as the Harbour House, also on the cover of the book, along with their wonderfully playful Ucluelet Aquarium.

With the opening chapter of the book – Blue Sky Thinking –  outlining their office philosophy as well as offering several gems of wisdom, the book closes with a biography on each architect’s respective careers, before and after their partnership, with a biography of the practice itself accompanied by a chronological list of their work. And characteristic of their humility, Bo and Kim remark themselves that they could not have done it on their own, thanking the interns and architects who have had the good pleasure to work with and for them over the years. But it is of course the clients that have the final word, as their word of mouth continues to spread the good news that their architecture is one of the life well lived.

For more information on the book, visit the Images Publishing website.