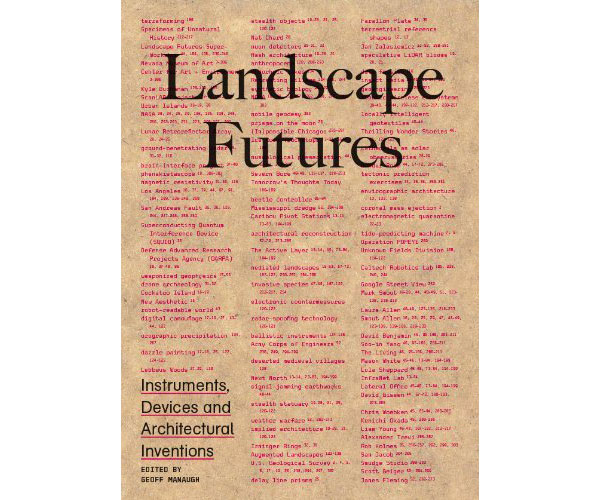 When I first saw Landscape Futures: Instruments, Devices and Architectural Inventions, I was under the impression that Geoff Manaugh – head of the well-known BLDG BLOG – had written another book, and that, therefore, I was destined to own it. But upon closer inspection I noticed that Manaugh instead curated the contents for a customized journey through an exhibit held at the Nevada Museum of Art entitled—obviously—Landscape Futures.

Beyond just the exhibits, this book stands on its own as a vast collection of assorted spatially-centric items. I say ‘items’ because Landscape Futures is not just editorials, or pictorial guides through the exhibit (although these too are present), but also several interviews with the individuals whose work was on display during the exhibit, as well as a magnificent collection of imagery and writing of many different styles which closes out the book. This includes fictional accounts of future Chicago’s, to a historical look at Geoengineering and its sordid past, all the way down to potential lesson plans for future classrooms and walking tours of Los Angeles.

As David B. Walker, Executive Director of the Nevada Art Museum states in the foreword, Landscape Futures was an exhibit solely meant to highlight the designers and individuals who “use technology to visualize and interpret data derived from the world around us; their innovative and sustainable responses to the rapidly changing global landscape encourage creative interdisciplinary responses and further our intellectual curiosity.”

A brief essay entitled “Data Land” by William L. Fox follows Walker’s foreword, and after that, Geoff Manaugh enters with a piece of his own. Although it is a small portion of the book, Manaugh manages to make use of every paragraph, detailing several different scientific techniques of the past, present and future which focus on our perception, use, and sadly, destruction of the planet we call home. He brings forth imagery of seemingly barbaric tools used a century ago, which set the stage for the idea of forging onward into the future.

It becomes blatantly obvious through Manaugh’s interview’s with the individuals chosen to exhibit in Landscape Futures that he is interested in their thought process—the how and why of their decisions to display what they did, and how it was relevant to a changing landscape. Frequently, these interviews ramble off in to tangents, but these diversions from the topic are not distracting in the least, but rather lead the reader into a slew of consciousness put forth by the speaker as he or she recounts their work in a personal and forthcoming manner, making it accessible and unpretentious.

Furthermore, the interviews do not feel canned or repetitive in any way.  Each designer or individual brings something truly unique to the table, from David Gissen’s proposals for historically preserving parts of our world in their natural habitat and creating exhibits which surround us outside of a museum, to Mason White and Lola Sheppard’s work on moveable architecture used to assist in the migration of caribou in Northern Canada. Chris Woebken lets kids feel what it is like to be a giraffe, a bird or an ant, with playful looking, wearable devices he crafted to mimic these creature’s perspective of the world and its landscapes, while Liam Young discusses robotic insect drones and their future possibilities in reviving the dwindling honey bee population.

At the center of the book, there is a collection of schematic images that are placed with very little guiding information. While at first it is difficult to understand what one is looking at, the reader soon realizes that he/she is flipping through designs by Smout Allen and that this was essentially all the process work they had completed during the course of the project: condensed, with no placeholders or annotation. Even in their raw state, these images compelled me to study them closely, as if some hidden message was lost inside, like a plan view of a water pump turned ancient hieroglyph.

Just beyond the latter, the “Landscape Futures: Work” area begins, and as the editor himself puts it, the section is made up of “philosophical toys to ironic provocations,” which is a perfect descriptor of the content. “These devices are not merely diagnostic but creative,” he continues, “deploying fiction as a means of exploring alternative futures: landscape futures, terrestrial scenarios for which we have no other guide.” This was by far the most entertaining and mind bending aspect of the book. The amount of insight that each individual put into the work that was included, was unlike any I have ever read. The striking prose of James R. Fleming as he dives into the confrontational and downright terrifying world of Geoengineering enthralls you from the first paragraph, and refuses to let go until the final full stop.

David Gissen contributes once again by discussing the Egyptian ruins, their historical excavation, and the expedition to the United States to be preserved outside of their natural habitat. Also included is an almost comical collection of beliefs made at that time about the preservation of spatially designed features, such as whole tombs or large artifacts.

While Landscape Futures was not a new book by Manaugh as I had hoped it would be, I was given something even greater—an introduction to several other interesting authors, artists, designers, scientists and theorists whom I now wish to follow and learn more about. This was clearly one of Manaugh’s goals in putting together this remarkable book.

Although I could continue recounting every speck of information within the book for you, I won’t, since you should already be ordering your own copy. If you are the least bit interested in science fiction, spatial design and our world as a constantly adapting and dynamic infrastructure then Landscape Futures is a must own.