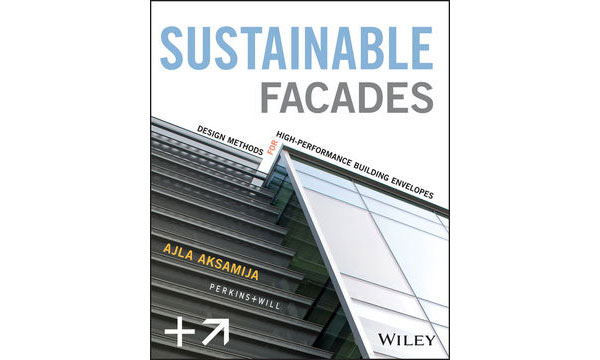 There is so much in the world today revolving around sustainable design and it seems that every industry and profession is scrambling to make sure that they are recognized for their sustainable efforts.  This is a noble endeavour, of course, and through the combined effort of Ajla Aksamija and Perkins+Will, an unassuming book about façades has humbly changed how I look at the exterior of a building. Sustainable Façades: Design Methods for High Performance Building Envelopes is a textbook, a reference book, and a strong push in the right direction for bringing theory to life in the built environment.

The book is brief but exhaustingly thorough. It is divided into five chapters: Climate Based Design Approach for Façades, Characteristics of Sustainable Façades, Designing for Comfort, Emerging Technologies in Façade Designs, and finally Case Studies. The beauty of this structure is that each chapter builds on and complements the next—what you learn in chapter one, relates directly to chapter two, which then feeds into chapter three, leading to chapter four, and finally, everything is melted down into a boiling pot of real world examples by Perkins+Will. This allows the reader to learn the theory and follow it right through to execution including how the buildings are evaluated after their completion.

As someone who has been interested in architecture since a young age, I never put much stock into the design of a façade in general, and after reading Sustainable Façades, I can say that it opened a curious door inside of me. I wouldn’t go so far as to say that I know everything I need to know about curtain wall systems or thermal properties, but I would feel comfortable entering into a conversation in a round table discussion after reading the book.

As mentioned, the content of the book is presented in such a way that the theory comes first, and then is described by either a case study or an example from a test project. There was nothing pompous about Sustainable Façades. At no point did I feel like I was on the outside looking in, and despite having some knowledge of the architecture field, I often find similar books throw baffling new and foreign content in one’s face. This book could have very easily done that and confused the reader, but it successfully strays away from the latter. In areas where large cross-section drawings were displayed, an individual may not need to read them if they didn’t understand what they were looking at, as the content was quite well described verbally.

To that end though, this isn’t a book that your average individual will just pick up for a Sunday read. Naturally, the audience has to have a base knowledge of the field and an interest in delving into some very technical information. For example, pages are filled with callouts of thermal properties of different materials, R- and U-value calculations, charts and diagrams of sun path analysis, and interpretations of different materiality and its effect on the interior comfort level, once again charted in bar and line graph format. While very interesting, its in-depth nature ensures that it is not a read one just picks up and uses like a standard textbook. Even for those who have that level of enthusiasm, the author makes clear that Sustainable Façades does not provide sure-fire methods to success, but rather a means to start a project on the right foot by looking at all the variables.

I only had two small issues with the book. The first is a complaint common to many architectural books: the lack of disciplines featured. I understand that this book is about façades and their designs, but internal comfort is moderated primarily by façades and, as such, the interiors of a project cannot be dissociated from facade design. Similarly, landscaping was a footnote, and there are several areas of design interested in the integration of plant life and façade design. I found that this aspect was lacking, as well.

The second issue was quite specific: there were several abbreviations which were explained, but certain key ones were left undefined. At one point, for example, I had to Google what “h-ft2–oF/Btu” meant. I understood the basics of it, but for a book which does such a great job describing everything else, I found it a bit surprising that something so integral to understanding energy use (thermal) would be left unexplained.

That being said, from beginning to end, the book delivered everything it promised, and it did so in such an unpretentious way that I felt I could enter into the world without feeling an outsider…..something inherently important for the future of design professions involved in sustainability. The more we understand each others work, the more we can enhance our own to better suit a cohesive outcome. Sustainable Façades does this with elegance and tact, uncommon in a “textbook” style publication.