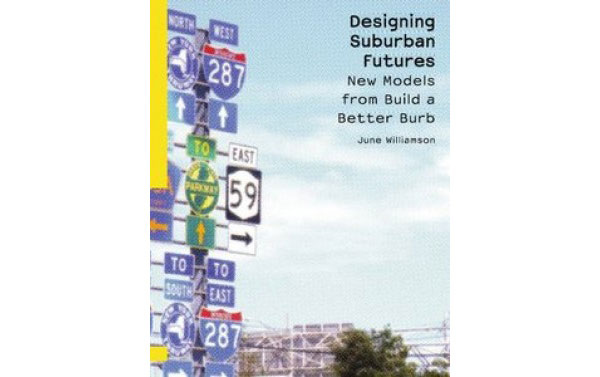 Designing Suburban Futures is a book based on a competition held in 2010 that saw design entries from around the world and across a variety of disciplines, tackle the issue of suburban life in Long Island. In the words of author June Williamson, her “call to action in this book, to design better suburban features, is not a novel one. Many have preceded me, and others will follow…..However, I do hope to have articulated and framed arguments and opportunities in a way that is clear and compelling, by bringing together several strands of research and design propositions, including the vivid examples from the 2010 Build a Better Burb ideas competition for the suburbs of Long Island, richly documented in these pages.”

The book itself is broken in to two Parts – Vision: A Role for Design in Suburban Resilience and Exemplar: Building a Better Burb on Long Island – each of which is subdivided further into essays relating to greater issues going on in the world of urban design. More specifically, in Vision we are greeted with Context for Change, Design Culture Responds to Sprawl: 1960’s to 2010’s and Better Suburban Futures. These essays are written from a historical perspective and eventually transform into a future, outlook-based tone. In Exemplar, readers are essentially shown the brief that the applicants received upon entering the competition, the “winning and noteworthy competition schemes,” a conclusion and an epilogue, titled New Roles for Architecture and Urban Design which focuses heavily on the lessons learned throughout the competition.

Although the intentions behind the book are good, its structural disconnect makes exploration or discovery on the readers behalf a bit difficult. The foreword by Ellen Dunham-Jones was a good introduction to the concepts within the book. However, there was a lot of redundancy in Context for Change as Williamson explicitly quoted a number of works of others, seemingly more than using her own words. Interviewing some of the people she was referencing would have helped infuse more variety into this section. From an overall reader standpoint, the connections that Williamson is trying to form in the mind of the reader between our urban history and that of the futures displayed in the competition are not properly coalesced. The themes are too disparate, too vague and general and do not serve the purpose I believe she was trying to accomplish with the book.

That being said, the essay that followed – Design Culture Responds to Sprawl: 1960s to 2010s – was one of the most rewarding in the book. It provided a historical look at suburbia over the past 50 years. Here readers are immersed into an interesting, and often times depressing world, where a strange juxtaposition falls on the nostalgic ideas of suburbia many of us have in our minds.

My generation was raised with dreams of the white picket fences and luscious green lawns. These feelings are seen in one photograph on the happy faces of people standing in their yards alongside an accompanying photograph of racial hatred and angst, which surrounded the growth of this model of the suburban built landscape (known as the “white flight” from the urban center). The contrast was powerful and made me me appreciate the realities behind the suburbs and some of the social issues we face currently, beyond the commonly cited problems of sprawl.

It was in this reflective frame of mind that I moved into the final Part of the book – Exemplar – and was greeted by underwhelming examples of work. I have trouble, myself, discerning what was disheartening about the pages, however. Was it the authors lack of clarity that skewed the projects to seem less interesting or powerful? Had her strong accounts of the history of urban design actually done her a disservice in the end by not aligning the changes she spoke so highly of with the actual outcomes presented by the projects? I sadly cannot say which of these exact issues was prevalent, but the fact that all three are mentioned is enough to say that the cohesive nature of this book, upheld through the essays, quickly dissipated when the contestants entered the arena.

Also, after so much painstaking research into the world of urban design – a field which encompasses a wide definition of ‘design’ – the results highly biased architectural solutions. While I do agree that the built environment is of paramount importance in this round-table discussion, the voices of many other relevant disciplines (landscape architects, urban planners, etc.) seemed muted. Their inclusion would have strengthened the entries and content of the book, overall. Thus, the good focus that Williamson displayed throughout the curation and writing of the early sections of the book, seemed lost on as the reader progressed and made their way to the Second Part.

In the end, I quite enjoyed Designing Suburban Futures for what it was: a quick read that included some broad arguments on the present and future of the suburbs described around a fantastic historical account of suburbia, with the latter tied together loosely into the Build a Better Burb competition – which could have been presented more powerfully with an emphasis on how a diversity of creative people tackle bigger issues. Had the two parts of the book been better integrated to form a cohesive stance, the outcome would have been quite amazing. That being said, all of the pieces independent of one another do hold strong societal importance and make one reflect on where and why we have come to the place we are. As such, they are worth a read, especially for those who want to get a good introduction to the issues around suburban development.