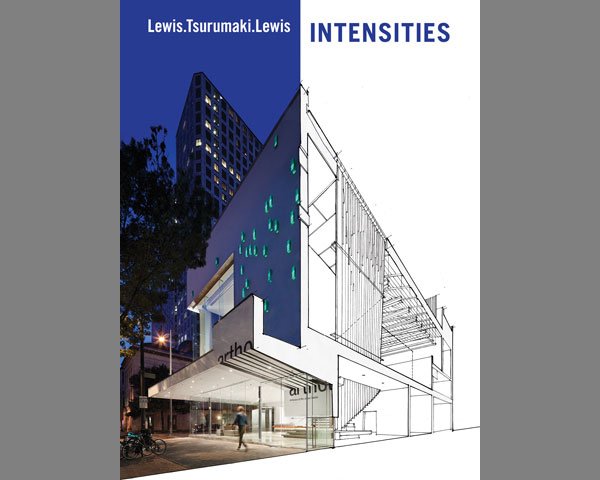 LTL are back with a new collection of their architectural achievements since they delved into the philosophies guiding their work in Opportunistic Architecture (2008). On a scholarly level, I am always impressed with the amount of thought that goes into every LTL project. Their penchant for seeming to find themselves in tough and demanding design situations seems to be ever growing, as their work has taken on a new level of complexity since publishing their first book.

With this in mind, they describe their practice within the book through five different categories of “intensities”. One such category, The Intensities of Section, for example, describes the significant role cross-sectional representations play in their work as “the representational means to make visible the most complex and intriguing aspects of architecture….where thermal forces, building form, and structural and material systems converge and are most legible.”

They speak to other “intensities” as well, including “Intensities of Contingency” (or thorough research), “Intensities of Resources” (the belief that architecture does not need to be limited to bad design because of budget constraints), “Intensities of Surface” (an expansion of surfaces for multiple uses or purposes), and finally “Intensities of The Social” (a response to the digital world’s impact on our spatial environments). All of these philosophies comprise their whole “intensities” idea, essentially showing that LTL has ramped up the status quo of architecture.

The book follows a logical sequence, just as Opportunistic Architecture did: no specific linearity, just taking the reader through the projects as they come, as to reaffirm the “loose” philosophy that LTL purveys. It is effective and easy to navigate the barrage of text versus images, which contain a certain flair that only LTL seem to be able to execute with such precision. Their blend of hand sketching, Google SketchUp, and Photoshop make for entirely unique images rendered to show a collection of conceptual journeys matched in the same frame with a graceful final rendering – sometimes to the point of blending the hand work with a photograph.  It is through this form of expression that the true talent of the firm is understood. We can see thought processes, aligning with programmatic ideation, and the true breakdown of the critical problems being posed (and answered) during the course of a project via their representations.

More critically, the inclusion of two projects that were previously shown in Opportunistic Architecture (MSK Lobby Wall & Arthouse) was somewhat disappointing.  While this could have been used powerfully to convey a new message and philosophy of the firm, or simply make a stronger connection to their earlier book, one gets the impression the two projects – as strong as they are – were included to simply increase the number of pages in the book. Speaking as someone who read their first book, integrating these past projects more meaningfully would have strengthened the expanded philosophies which have been outlined prior.

Although I have a handful of philosophical differences with LTL, the projects presented in Intensities are beautiful projects, which –  built or conceptual – have succeeded in many areas and allowed LTL to be recognized as a firm of smart and charismatic individuals in the architecture community. Those who enjoyed Opportunistic Architecture will surely like this monograph.