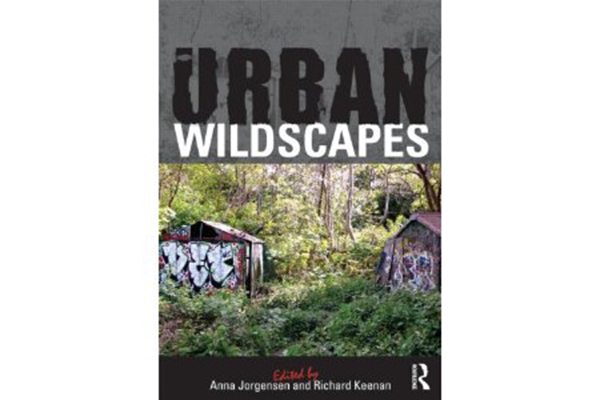 I attended a workshop recently in which the participants were asked to open the conversation by saying a few words about one of their favourite places in the city. Interestingly, 80% of people in the room talked about places on the periphery—where nature is reclaiming man-made infrastructure, where groups of people are claiming their right to appropriate a space through activity or artistic expression, and where the landscape inspires curiousity, imagination, and a sense of adventure. These peripheral places, existing between the bounds of urban order and chaotic wilderness are the “urban wildscapes” that form the premise of this book.

Developed as a follow-up to a conference on the subject, Urban Wildscapes is a collection of essays spanning a wide variety of theoretical and practical approaches to thinking about, designing, and developing the areas, spaces, and buildings that are typically beyond the city’s normal forces of control. Although the collection emphasizes the regeneration of large-scale former industrial sites, its content spans everything from abandoned buildings to untended patches of urban park, from vacated mines to fenced-off infrastructure embankments. It is open and inclusive in its definition of urban wildscapes, and it emphasizes that a wildscape is not the dichotomy of an ordered or planned landscape, but rather sits anywhere along a continuum where conventional planning, design, and construction mechanisms have been altered or disregarded.

The essays are loosely divided into three themes: The first section addresses the importance of urban wildscapes from a theoretical point of view; the second contains a series of case studies demonstrating how urban wildscapes have been valued, altered and maintained in a number of different settings across the world; and the third extracts a number of processes and principles that should be considered in the planning and design of urban wildscapes.

The theoretical section of the book hinges largely on arguments around the need for more unstructured space in cities: spaces for play, risk-taking, and any number of activities that are discouraged in more formal public spaces. Recognizing the controversial nature of these spaces, it also addresses the role urban wildscapes play in documenting history and telling the urban narrative of change over time.

The case studies are then used to demonstrate the varied ways in which urban wildscapes are formed, and the various mechanisms that have been used to elevate their value and accentuate their role in urban contexts.

The final section of the book is comprised of essays that attempt to distill down the essence of urban wildscapes and the processes and characteristics that make them such unique urban spaces. This section largely emphasizes the role of narrative in the built form of cities, the social and cultural processes that lead to the appropriation of urban wildscapes, and the physical cues that indicate a looser set of social norms in these types of spaces.

As a whole, the book reads a little disjointedly. With each author there is a new writing style, a new definition of the term ‘urban wildscape’, and a new frame of reference from which the subject is being tackled. That being said, the choice to keep the essays independent not only opens the reader to an incredibly comprehensive study of the subject matter, it also means the book can be easily read in segments or referenced by individual essay or example.

For more information on the book, visit the Routledge website.

Pietra is an urban exploration enthusiast who is passionate about community development and testing the public realm. She is a recent graduate from the Master of Landscape Architecture program at UBC and has a background in business and literature.