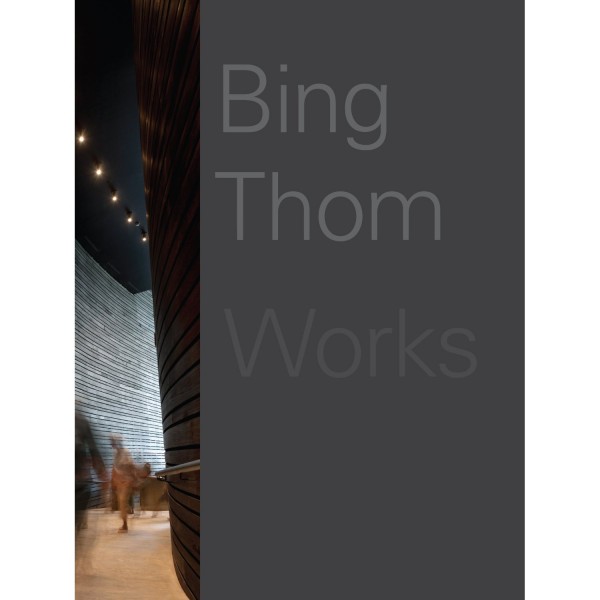 “As the author himself states, this is not the typical architect’s monograph. For the book, Bing Thom has selected a number of projects from the many works and proposals produced in his thirty-year career and through them explains to the reader the questions he has spent his life asking. What is architecture? What is the right approach to architectural design? Around the time he opened his office in the early 1980s, Vancouver’s economy had hit rock bottom. In the process of working on a small apartment building, a warehouse, and a design office for himself,  he gained experience as a master builder. He explains how he was able to learn the importance of controlling the budget and schedule from architectural design to completion and collaborating with people of different professions during that process. He goes on to describe the passionate pursuit of his ultimate objective, which is the creation of high-quality buildings.”

– Fumihiko Maki, from the Foreword

It is not surprising that this long overdue monograph, from one of Vancouver’s most formidable architecture offices, is grammatically titled in a way that suggests the architect and subject of the book is showcasing his office’s work while simultaneously working on his next project. This is certainly the case with Bing Thom Works, as suggested in the introduction by the 1993 Pritzker Prize winning, Tokyo-based architect Fumihiko Maki. This very same theme is also articulated in the other six essays written for the book, and captured in the lens of his often photographic collaborator Nic Lehoux.

Since opening his office in Vancouver in 1982, Thom, along with his partner Michael Heeney, has produced an inspiring portfolio of work that crosses municipal, provincial, and now international borders. And unlike many Vancouver firms that have opted to work in only one or two safe niche markets – multi-residential, health care, cultural and institutional – Bing Thom Architects has designed multiple building types with results that, more than once, have broken the mold. A concert hall in the round that can be ‘tuned’ to suit a certain performance; a post-secondary institution built atop a shopping mall while still in operation; an office tower whose profile has been incorporated into the municipality’s ‘brand’ – these achievements in themselves might seem enough to cap the career of an architect who cut his teeth as project architect for Arthur Erickson in the 1970s. But if you were to ask the 73 year old architect if he’s looking to retire anytime soon, he would surely say that he still has a few tricks left up his sleeve.

Three of his most recent projects are certainly a testament to this, only one of which – the Arena Stage in Washington, D.C. – is featured in the book, with his recently opened main branch of the Surrey Public Library and an opera house in Hong Kong, currently under construction, surely to be published in a future monograph.  For those of us lucky enough to have been present at the 2010 RAIC Advocacy Awards put on by the Metro Vancouver Chapter, Mr. Thom gave a keynote presentation of the then recently completed Arena Stage, much to the delight of many of us who, up to that time, weren’t even aware of the project’s existence (it would be a few more months before it would be featured in Canadian Architect).

The Arena Stage, which was ten years in the making, seemed to arrive simultaneously with the opening of a number of projects closer to home, including the Sunset Community Centre in Vancouver and aforementioned Surrey library, making it all the more fitting that Bing’s office would receive the 2010 RAIC Firm of the Year Award.

The book itself is light on text, with a short introductory foreword in addition to some opening words by Mr. Thom and Mr. Heeney, along with six succinctly titled (and also brief) essays – Master Builder, Why Risk?, On Risk, Vancouver Effect, Collisions, and Jazz – the book fully emphasizes the work, as its title would suggest. In its large 9″ x 12″ coffee table format, the photography of Nic Lehoux, Martin Tessler, and Simon Scott, among others, is given front stage, capturing all the drama of the light and shadow, colour, and attention to detail that we have come to expect from this inspirational architect and atelier.

As for the seven projects carefully selected for the work, the intent here is clearly to leave the reader wanting more, such that one is teased from the pages to actually go out and visit the buildings that aren’t included, including the Surrey library, the Vancouver Aquarium, even the office of the architect himself, which he designed and moved into under the north side of the Burrard Street Bridge…..and where Bing and his practice has remained up to this day.

In the book’s opening lines, the editors explain that they have not felt compelled to produce a monograph of the office’s work until now for the simple reason that a book is not architecture, and that while “a book may capture aspects of the feeling or mood of a building, it is only through movement, touch, sound, light, and space that a building is brought to life.”

Partially for this reason, the book is neither marketing exercise nor vainglorious monograph, but rather a call to arms, especially to the up-and-coming generation of architects, to work against the grain which has commodified architecture in the last decade. Moreso, in an age of excess it is to bring the profession back to a place of humility and integrity – to dare to find meaning and make a difference with the spaces we shape. It is, in fact, this place of inspiration in which Mr. Thom grounds his practice.

And while many of his contemporaries have launched themselves into the world using Vancouver as their springboard, Bing has brought the world to Vancouver through the lessons he has learned here, regarding how one can positively shape their city. Much as Maki explains in his opening comments, it is only through appreciating one’s own hometown can one learn to understand the rest of the world, noting as he does that is through an architect’s understanding of the place from which one has come that may enable them to think about the basic nature of human beings and communities. Such as it is with Bing Thom Architects, with this book arriving at precisely the time that the value of the architect in our society is being challenged by our aggressive do-it-yourself age.

As finely honed as one of his building details done with Fast + Epp, Bing Thom Works provides a modest sampling of BTA’s projects, balanced with the office philosophy which seeks to achieve harmony in the collective cacophony we know as the modern world.