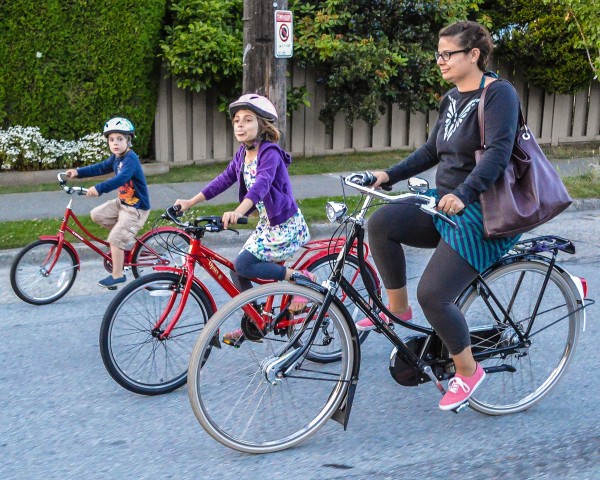 Unlike some of the best-established cycling cities, North American transportation cycling culture is still growing and maturing — every year we have more eager, and often nervous, new riders with varying levels of skill in traffic. With a relatively young bike culture, limited bike-specific infrastructure (bike lanes, etc.), a gap in bike education, and a wider variety of riding conditions to adapt to, some cycling norms are still in development. Many new riders pick up cycling habits from watching others and through their own lived experience. Although honing skills through observation and experience is important, it’s crucial to have a solid and well-informed foundational knowledge to start from.

The physical act of riding a bicycle, the balance and muscle movements needed to propel the vehicle forward, does come back quite easily, if you learned to ride as a child. That said, the part where you ride that bike out into the often fast-paced and shared vehicular roadways of your city, is not quite so simple. Learning how to do so safely can help reduce chances of a collision or crash, can help build confidence, and make the experience more enjoyable.

Choosing a Bike & Keeping It Safe 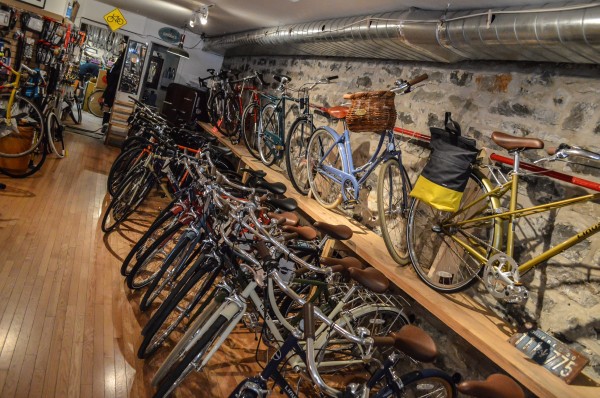 Other than confidence and a good sense of how to behave as part of traffic, the only other thing you need to get started cycling is a bicycle. You can begin by borrowing a bike, or using a bike share program if your city has one, but most people will soon want a ride of their own.

There are several basic bike styles, and many models to choose from, but the easiest place to start is by talking with friends who ride and shopping around online, then visiting the nearest bike shops to see, feel and try out what they’ve got in stock. Doing early research means that you can be better prepared when you get there, and know what you want to try out. Even if your budget only allows you to pick up a bike from a large chain retailer, visiting independent bike shops can give you a better sense of the bike landscape, and an opportunity to ask bikey questions. If you continue to ride regularly, chances are you’ll eventually want to upgrade your wheels — independent bike shops are the place to do so. Bike shops can be fantastic community hubs and a great source of all kinds of bike related information.

Before you actually take the plunge and pick up your ride, there are several things to consider: budget, distance of travel, terrain, speed, parking/storage. If you understand your needs for each of those factors, a bike shop will have no trouble finding you a suitable ride, be it a road bike, upright city bike, mountain, hybrid, folding, cruiser, or electric assist bike.

A well-fitted bicycle is important and there are several factors that affect bike fit: frame size; handlebar style, height and placement; seat style, height and position. Be sure to ask for help getting the best fit – city cycling shouldn’t be a pain in the butt, back, or neck.

Once you’ve narrowed down the bikes you’re interested in, take them for a longer test ride — even 10 minutes will give you a really good feel. Bike shops will always welcome you back for adjustments to your bike after you’ve been riding it for a week or two.

Love that new bike? Invest in a good lock (or two) and use it right. Always lock to something secure, indoors overnight if possible, and make sure to lock tightly through the bike frame and rear wheel. Add a metal cable that can also go through your front wheel for added security. 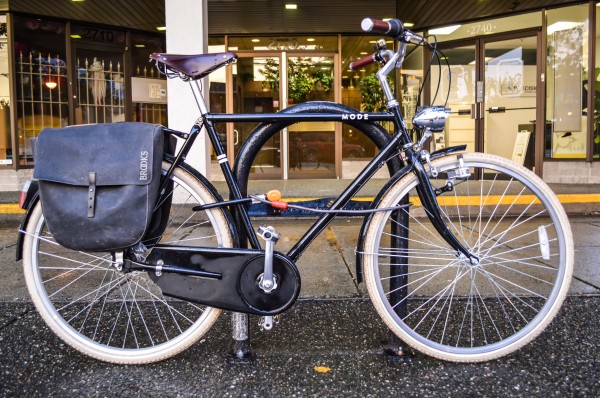 Before you hit the streets you should be able to:

You also need to have a working knowledge of the rules of the road and how they apply to you. These are all in my upcoming book, but here are some to get you started. 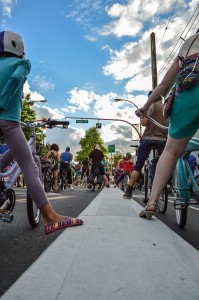 City traffic is a fluid and unpredictable beast. Movement along our streets presents a series of choices that need to be made regardless of mode, but there are even more to be made from the seat of a bicycle. The more you ride, the better a decision maker you’ll become regarding what risks are acceptable, or not, while navigating through the daily urban obstacle course. Riding assertively and predictably, anticipating what’s ahead, and selecting the right route are all keys to making cycling a fantastic way to get around the city.

Your vulnerability is real on a bicycle and shouldn’t be underestimated. Be prepared to adapt to situations as they arise en route, and understand that riding a bike as part of traffic requires continuous readjustments to stay balanced and in control. Safe cycling involves predicting what could happen in the roadway in front of you through constant and keen observation, broad scanning of the streetscape, and an awareness of what’s coming up behind you via shoulder checking and listening.

You’ll often find yourself in roadway scenarios that you’re unfamiliar with in terms of which way to go, what the signage means, and where you belong. Remember, if something seems too risky, you can always get off and walk your bike past the issue. Until you’ve gained confidence to know when you can claim your space and do so safely, it is often better to yield and proceed when possible. That said, if you’ve decided to either wait or to go, don’t then change your mind — commit to your decision to avoid mixed signals and a potential collision.

These days you can find a wider variety of bike specific infrastructure on urban streets. While still quite limited in their application, most large Canadian cities will have some combination of typical painted bike lanes, signed bike routes, off-street bike paths, sharrows/shared lanes, and bi-directional bike lanes. Newer infrastructure has also started rolling-out, and includes contraflow bike lanes, physically separated cycle tracks, and bike boxes that give cyclists priority at intersections. Municipal websites will have details online about best practice for their use, and more tips for rules of the road as they apply to cyclists.

Things to watch out for

Dooring happens when a driver or passenger opens their door into traffic in your path, or next to you. You can run into the door, or be hit on the side, both of which can cause anything from minor injuries to something more serious. Riding 1m away from parked cars, and keeping a vigilant eye on vehicle occupants, will help you avoid getting doored.

Trucks and buses have many large blindspots, which means you’re invisible to the driver. Stay back to stay safe. Seriously. Never try to squeeze past, or stop beside, one of these vehicles, and remain tuned into their movements and signals when they’re near you on the road.

Taxis can be unpredictable and often won’t see you when searching for their next fare. Expect the unexpected from both drivers and their passengers.

Potholes, cracks and debris in the roadway can all cause crashes if you hit them a certain way. Keep an eye on surface conditions ahead of you and use caution and signals when maneuvering to avoid a hard hit. If you can’t go around something, slow down and stand up from your seat so that your knees and elbows can work as shock absorbers.

Streetcar tracks (and their bike felling powers) are familiar for anyone cycling in Toronto. Cross tracks at more of a right angle (perpendicular rather than parallel), and be extra careful around wet tracks as they become more slippery. Always stop at open streetcar doors which indicate passenger priority – wait until the doors are closed to proceed, even if the light is green.

Construction zones should be approached with extra caution and reduced speed. Trucks exiting the site often deposit debris in the roadway, and the staging of larger developments sometimes reduces the number of lanes available forcing vehicles to merge. Rather than try to squeeze through, it is generally safer to take the full lane until you pass the site. Obey the slow and stop signs used by construction crews.

Pedestrians have right of way at intersections and in crosswalks. To keep everyone safe, watch for unexpected crossings and avoid riding on sidewalks, which are for pedestrians.

Conflict on the roads is unfortunately all too common. Since you never know whom you’re dealing with, it’s usually better not to get into an argument in the street or touch someone’s vehicle on purpose — it could prove dangerous and is best avoided.

Emergency vehicles always have right of way when sirens/lights are on. Move to the right of the roadway and stop until they have passed.

Using a bike for transportation in the city, amongst other things, saves money, is efficient, practical, fun, convenient and even healthy. Despite all those positives, riding in a fast-paced urban environment can still be intimidating for a variety of reasons. But remember, you don’t need to jump in at full speed. Start by riding with a friend on quiet side streets or on bike-specific paths, then work up to bike lanes and faster moving city roadways as your confidence grows. Every city street can become accessible to you by bike once you understand how to safely navigate them. Enjoy the ride!

[Yvonne Bambrick is an independent Urban Cycling Consultant, event & portrait photographer, and Coordinator of the Forest Hill Village Business Improvement Area. She was the founding Executive Director of the Toronto Cyclists Union (now Cycle Toronto), and co-creator of Pedestrian Sundays in Kensington Market. For more bike info, pick up Yvonne’s book, The Urban Cycling Survival Guide: Need to Know Skills & Strategies for Biking in the City, with illustrations by Marc Ngui, published by ECW Press. Available in book and bike shops as of March 2015.]

All Photos by Chris Bruntlett