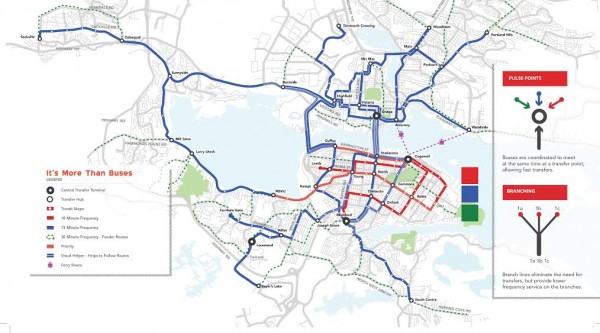 By Sean Gillis and Scott Edgar

To be sure, the city would benefit from the decrease in carbon emissions that would come with more people commuting by transit instead of by car. But high-quality transit is also essential for making a city affordable for families that can’t afford two or three cars, and for making a city attractive to the growing number of young people who choose to live car-free — exactly the young people Halifax wants to stay in the city.

Maybe most importantly, great public transit is essential for building human-scaled cities, instead of car-dependent sprawl. This point is not aesthetic. It’s economic. Car-dependent sprawl costs far more for cities to service than denser, walkable cities, and Halifax is the capital of a have-not province. It simply can’t afford to continue its recent pattern of expensive car-dependent development. Given that sobering economic reality, Halifax can’t afford not to have great public transit.

Halifax should be a great transit city. It already has a dense, walkable core, and it has a big population of students and government workers, both groups who tend to take transit.

But for too long, Halifax has squandered its potential by providing infrequent, unreliable service to most residents. The system is an incomprehensible mess of routes. Lots of people have access to some transit, but almost no one has access to good transit.

These problems have persisted, despite new resources. Costs and service hours have gone up almost 19% since 2007, but that hasn’t even produced a 3% bump in ridership. And in 2012, rider satisfaction dropped to just 61%. For years, people in Halifax have seen transit as inconvenient and unreliable.

So in 2011, a coalition of community groups formed It’s More than Buses (IMTB), which took on the job of creating a vision to fix Halifax’s transit problems.

That year, IMTB hosted a series of workshops that brought together residents with experts like Paul Bedford, Toronto’s former Chief Planner, and transit superstar Jarrett Walker. Those conversations got to the most fundamental questions about public transit in Halifax. What goals did Halifax want to achieve with its transit system? What kind of service makes for really high-quality transit?

That discussion was a turning point: in it, IMTB forged a game-changing vision for transit in Halifax, laying the groundwork for everything it’s done since.

It’s a vision of a transit system that’s fast, frequent, and reliable — where high-frequency transit corridors have service running at least every 15 minutes, all day, every day. These corridors would form a transfer-based network, and a range of transit priority measures, including transit-only lanes that would keep transit out of traffic, and guarantee reliability. Essential to this vision is committing resources to transit services that will build ridership.

IMTB’s third community workshop in 2011 built momentum. Key Councillors were there, showing the Municipality was interested in change. Later that year, Council directed Halifax Transit to ask itself the same questions about goals that IMTB asked in its workshops. Halifax Transit’s work culminated in their hugely successful public engagement sessions in 2013. Those sessions showed clear and broad support in Halifax for a simpler, transfer-based network, and an emphasis on high quality, high-ridership services. In January of 2014, Halifax Transit began a full review of their network based on bold new principles.

It looked like Halifax was finally going to get a great transit system.

And then. . . nothing. In September of 2014, Halifax Transit tabled a Council report suggesting they’d dramatically scaled back the ambitions of their review, but saying almost nothing else about what they actually were doing. That left a lot of frustration, and unanswered questions.

But there was one question IMTB could answer. Could a high-frequency, transfer-based system work in Halifax? Yes. IMTB had been working to take the vision of high-quality transit that came out of its 2011 workshops, and turn it into something more concrete: a prototype of a network that embodies IMTB’s vision of frequent service in a transfer-based network — and the principles that came out of Halifax Transit’s own public engagement. In September, IMTB launched its network proposal. That proposal stands as the proof-of-concept for the kind of transit system that Halifax has said it wants.

So what’s next? Early in 2015, Halifax Transit is due to table their own draft report about redesigning Halifax’s transit system. In the meantime, It’s More than Buses isn’t taking anything for granted. It’s not going to stop building support for its network proposal — and for making Halifax the great transit city it needs to be.