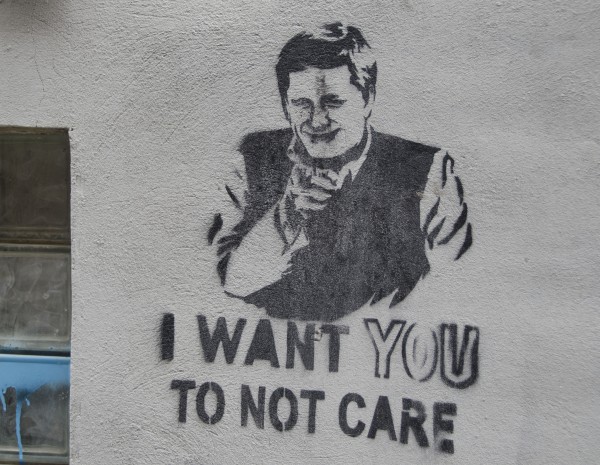 As the federal election stumbles towards a weary conclusion, it may not be an overstatement to say this contest will long be remembered for the way in which an entirely fake controversy, over an item of religious clothing, nearly obliterated our national discourse.

But the cynically manufactured niqab wedge reveals a mode of political action that has characterized the Conservatives’ decade in power – a consciously divisive approach that target-markets policies across a wide range of files, from taxes to criminal justice, foreign affairs, and the Islamophobia of this campaign.

It’s a singularly corrosive tactic, and one the next government must wholly reject in favour of a public interest outlook that aims to unite, instead of divide, Canadians behind policies designed to advance national well-being.

Stephen Harper’s tacticians have perfected the art of micro-tuning policies that align with the focus-group-tested anxieties of narrow segments of the public, in particular those groups that help secure seats in strategically important ridings.

These moves, moreover, have more to do with finely calibrated political signaling than with substantive policy; indeed, when you poke at significant aspects of the Harper government’s record in office, you find large policy fields that fit precisely this mold.

I asked the prominent University of Toronto criminologist Anthony Doob about the Conservatives’ tough-minded criminal justice record — long a major talking point for the government, but a subject that barely came up in this race.

“In a not very abstract way,” he told me, “the niqab issue is not different from their criminal justice policies.” The sought-after political dynamic, Doob explained, is an us-and-them scenario that allows the government to position itself as a defender of a tactically important voting block. “In a sense, he’s got a different issue to do the same thing.”

Doob mentions changes to the Criminal Records Act that made it more difficult for individuals with convictions to suppress that information once they’ve served their sentences. “It’s Harper’s way of saying, if you’ve screwed up, that shows you’re a bad person and we want to make sure you’re a bad person forever.” Like the changes, now overturned, to citizenship laws that resulted in the niqab ban, “it’s a way of excluding people.”

Certainly, many of the government’s criminal justice laws have ignored nuanced policy considerations in favour of legislative action that carries outwardly crisp messaging: removing citizenship from convicted terrorists, eliminating time-served sentence reductions, imposing mandatory minimums for a wide range of crimes, and making a show of adding new categories of crimes and sentences already covered in legislation. (The much-mocked “barbaric cultural practices” tip line is just the latest installment – after all, if the practice is sufficiently barbaric as to break the law, then call the cops; if not, well, write a letter to the editor…)

“Recent legislation has been piecemeal and often disjointed, with no obvious underlying rationale,” concluded Doob and University of Ottawa criminologist Cheryl Marie Webster in a recent paper [download PDF] that shows how the Conservatives broke with a long-standing multi-party Canadian consensus on criminal justice in favour of a punitive American approach that even Republicans are now rejecting.

Much has been said about the fact that the Conservatives ignore analysis and data when they make policy; Canada’s generally low crime rates didn’t dissuade the government from passing almost 40 criminal justice bills, many of which were over-turned in the courts. (Canada’s incarceration rate only inched up in the past decade, despite the Conservative’s determination to put more people behind bars.)

Doob, like others, suspect Ottawa knew it would lose appeal court challenges, but Harper wasn’t concerned. The poise – crime fighter; defender – proved far more important because it allowed the Conservatives to win over targeted voters by vilifying small groups of individuals. (Harper’s disgraceful attack on Chief Justice Beverley McLaclin may have been meant to achieve the same result.)

We’ve seen similar card tricks with a foreign policy that features tactically useful outbursts (e.g., the bellicose rhetoric about the Ukraine and Israel), anti-Muslim rhetoric and a warrior pose, all stances that require the assertion of an us-and-them approach to governing and carefully identified appreciative audiences.

I’d argue that even the Conservatives’ habit of target-marketing their tax policies to specific groups – homeowners with renovation projects, middle class parents who can afford sports and art classes, etc. – reveals a similar mindset, although these moves don’t require a Manichean worldview.

Because the sums are small, the tax policies themselves make little difference. But they telegraph the suggestion that certain segments of society – those who don’t own homes, those who don’t have school-age children, those who can’t afford music lessons, etc. – don’t deserve the federal government’s treats. Again, such ideas emerge from a poll-confirmed, us-vs-them outlook, and are advanced specifically with the goal of hoovering up those targeted voters, and their campaign donations, at election time.

For me, two moves in particular mark the nadir of the Conservatives over-use of this style of governing: the elimination of the long-form census, and changes to federal voting rules that make it much harder to cast a ballot. In both cases, the so-called reforms pivoted on make-believe enemies and the presumed grievances of small numbers of loyal voters whose interests, ultimately were adjudged to be more important than the spirited defense of two of our national public institutions.

Political rivalries come and go, but politicians and strategists of different ideological stripe often seek to learn from one another by absorbing and then imitating the winning ways of a fierce rival.

If the Liberals, the NDP, or some combination, prevail next week and replace the Conservatives, they owe it to the Canadians who desperately want change to make a clean break. The next government, if there is regime change Monday evening, must mindfully close the book on Harper’s hyper-tactical modus operandi.

After ten years, it’s time to end the target practice.