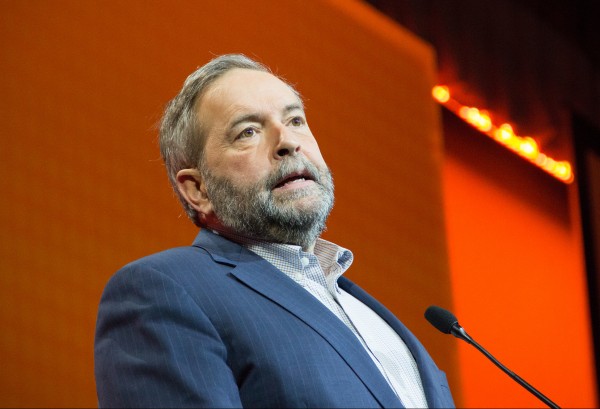 In a convention centre built into the north wall of the North Saskatchewan River Valley, New Democrats from every nook and cranny of the Canadian edifice last weekend discussed, disputed, articulated, and finally voted their conscience on fundamental questions of political leadership, economic security, planetary survival, and, of course, “a grammatical review of the party’s constitution… paying special attention to… incorrect or non-existent punctuation.”

I moved through the maelstrom as a first-time delegate to a national political convention (from the riding of Toronto-St. Paul’s). Let me reveal my bias straight away and without reservation: on the whole, I was duly impressed. While the dauphins of the punditocracy scream with bug-eyed certainty that the end is nigh, I was left with a mild sense that things for the NDP, while not exactly sun lit, were slowly moving in a direction after months of gear grinding.

Which direction, however, is another matter.

As a journalist, I’d sidled around the edges of political gatherings before, maintaining the requisite Janus face of skepticism and cynicism. And while the practicing political class wasn’t entirely bereft of those qualities at this convention, I experienced the weight of a counter-balancing force — a deeply felt commitment to sorting out the practicalities of political dogma.

Whatever is said, written or broadcast about the divided nature of the NDP leaving this convention, it is as nothing compared to the benefits of expressing difference within a principled political program. And that hard work was done in remarkably good faith.

Was there aggravation, mixed messaging, snubs, and hurt feelings? Sure.

Watching Tom Mulcair bravely face up to a convention that had essentially repudiated nearly a third of his working life was almost unbearable. But he chose to stand the test. As one senior party official who has seen it all (and voted to back Mulcair) wrote: “Tom was humiliated. But he will get over it. And so will we.”

Yet here’s the thing: what brought the NDP to that point wasn’t some slick marketing campaign adapted to a political purpose, or a starchy moralizing repudiation of governance per se. This was a serious debate among serious people, carried on with both good humour and concern.

For all that, the NDP is left with a daunting constellation of political paradoxes, and up to two years to sort them out.

Let us begin and end with The Leap Manifesto, the environmental/social justice call to arms penned notably by the world’s most famous advo-couple, Naomi Klein and Avi Lewis. This apparently non-partisan manifesto, released in the midst of the 2015 federal campaign, calls for an immediate moratorium on all carbon-based fuel development:

“There is no longer an excuse for building new infrastructure projects that lock us into increased extraction decades into the future. The new iron law of energy development must be: if you wouldn’t want it in your backyard, then it doesn’t belong in anyone’s backyard. That applies equally to oil and gas pipelines; fracking in New Brunswick, Québec and British Columbia; increased tanker traffic off our coasts; and to Canadian-owned mining projects the world over.”

That Lewis, Klein, and their party allies (including former NDP MPs Craig Scott, Megan Leslie, and Libby Davies) would seek to showcase a radical anti-oil agenda in the capital of Alberta at the height of an economic collapse might beggar credulity, particularly if their sole purpose in introducing The Leap was to build a consensus NDP policy with a push from the activist left.

The first formal encounter between the federal NDP and the Leap Manifesto occurred three hours before the convention’s official opening as delegates and NDP policy officials carried out an arcane and opaque procedural gavotte meant to determine which policy resolutions make it to the Convention floor for a vote. Advocates for The Leap, including Lewis, managed to move the Manifesto to the top billing among the 44 resolutions that were theoretically adjudicated on that day.

(The winnowing process, according to a long time NDP activist with executive experience, dates to an NDP convention during which a group of Trotskyites managed to push up their resolutions aimed at furthering the worker’s utopia. But before they could get out and argue this folderol before the plenary, the executive moved to seize control of the floor microphones, situating placeholders for more sensible speakers — a.k.a. “mic muffins” — ahead of the rabid Trots is a practice that endures to this day.)

Oddly, the initial debate about The Leap resolution wasn’t joined by Albertan NDPers. Instead, Leap advocates faced off against another group advocating a national transportation strategy.

On day two, however, Alberta Premier Rachel Notley arrived loaded for bear, her minister of the environment Shannon Phillips having already dismissed The Leap as “a betrayal.” Rather than calm the waters, in fact, Notley decided to raise a further tempest.

She delivered a speech written by her chief of staff Brian Topp, who lost to Mulcair in the last federal NDP leadership race campaign and predicted that Mulcair’s centrism would wreck the party’s electoral chances federally. “We’re acting, really acting, on the basis of a concrete plan that is actually being implemented,” she said. “That is what you get to do when you move up from manifestos, to the detailed, principled, practical plans you can really implement by winning an election.”

That not so subtle dig, subsequently quoted ad nauseum, is generally interpreted as the dagger aimed at killing The Leap in its crib.

Still, Notley offered up a line a little later in the speech that struck me as truer to the complications of reconciling principle and power: “The NDP isn’t a do nothing party,” she said. “Other parties do ‘do nothing’ way better than we ever could. We are condemned to be ourselves.”

That sentiment had Topp’s fingerprints all over it: the ironic solidarity of the sometimes disappointed, yet ever hopeful, idealist. Later, NDP éminence grise Stephen Lewis eloquently (and unsurprisingly) defended The Leap — and by extension his son’s political viability — as a platform from which to launch further debate — which, in the Möbius world of the NDP, will (he hopes) “condemn” the party back to its truer self.

Which brings me to Tom Mulcair.

Since his crushing electoral defeat last October, Mulcair had essentially been running to keep his job. I’d seen him at various NDP talk shops over the last five months. He offered variations on the same theme: “In addition to reprising my role as the most effective cross examiner in the House of Commons I will, having learned my lessons from the campaign (too cautious in offering substantive change as indicated in a report I commissioned) help re-engineer the NDP to make it a more efficient and campaign-ready electoral machine.”

And that seemed to hold the potential Benedict Arnolds, Vidkun Quislings, and Dalton Camps at bay. Indeed, by the time he arrived in Edmonton, Mulcair and his team of recently hired NDP pros were confident that the membership — particularly those in the party’s union rump — formed a solid base of at least 60%. This was not an unreasonable assumption.

Within a day, though, things went pear shaped. A senior labour organizer told me that while union members in caucus remained silent in the face of a leadership that was still espousing Mulcair’s bona fides, five minutes after the meeting ended those same folks could be heard in the hallways sounding a dissenting alarm. And that was before The Leap shit hit the Alberta fan.

In the end, the membership voted in good conscience on two premises: demographic change and accountability. Mulcair is 10 years Rachel Notley’s senior, and looks 20 years older. While Notley formed an NDP government in Alberta, of all places, Mulcair inherited Layton’s caucus and then cut it by more than half. All this guff about pipelines and The Leap is bogus punditry aimed at masking a sensible and practical decision to pursue power from the party’s natural instincts rather than jerry-rigging a political position for the sake of electoral calculation.

Only if the NDP’s membership continues the good faith internal debates that started in Edmonton (including, though not limited to, The Leap) can they pursue power nationally. The NDP — my party — must embrace the fate to which it is condemned.

Douglas Bell (@bellye66) is currently a member of the NDP and formerly a writer on The Newsroom, a CBC TV series satirizing Canadian journalism. At various times between 2008 and 2011, he was a political blogger for The Globe And Mail. As time passes, the difference between those latter two enterprises becomes more and more indistinct.