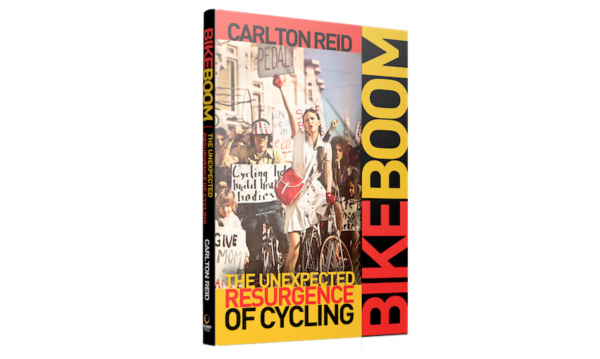 “Not only is bicycle travel human scaled, healthful, and non-polluting, but it turns out to be more efficient than jetplanes, salmon, and seagulls.”

When it comes to documenting the glory days of two-wheeled transport, and their undoubted impact on cycling’s recent revival, few writers are as dedicated or as prolific as professional mountain biker-turned-digital media pioneer Carlton Reid.

Reid’s 2014 book, Roads Were Not Built for Cars – a product of four years of research and writing, as well as an ambitious crowdsourcing campaign – methodically chronicled the underreported and underappreciated role that bicycle users played in paving much of the western world before the First World War.

His latest release, Bike Boom, forms the second part of a planned trilogy, and picks up directly where that book left off, examining the few times British and North American cities flirted with the idea of mass cycling in the 20th century, but never reaching the heights of their Dutch and Danish counterparts.

Once again, Reid shines a light on some of the lesser-known periods in bicycle culture folklore, including Britain’s forgotten network of protected cycle tracks built in the 1930s, and the Great American Bike Boom of the early 1970s, the latter of which saw the rise of manufacturing goliaths Trek, Specialized, and Giant.

The former, meanwhile, has garnered a great deal of attention on social media in recent weeks. Reid and his enterprising followers have unearthed over 300 miles of segregated bike lanes along British streets, many of which are hidden in plain sight on Google Street View.

These innovative cycle lanes were part of a 500-mile, Dutch-style network planned, initiated, and then ultimately abandoned by the Ministry of Transport at the start of the Second World War. Reid is currently raising funds via Kickstarter to research and possibly revive these historic cycleways, in the hopes that they can be meshed into the modern network that Britain desperately needs.

However, Bike Boom contains two important warnings to advocates who believe a network of protected bike lanes is all a city needs to get its residents pedaling en masse. Reid draws on examples from Columbia, Maryland and Stevenage, England; both master-planned “New Towns” built from scratch in the 1960s with miles of (what are now mostly disused) car-free bikeways.

Why did these two aspiring cycling cities fail where others had succeeded? In the “carrot and stick” world of shifting folks from cars to bikes, planners and policy makers had failed to make driving the least convenient option. How do they accomplish that? “By removing car-parking spaces, reducing motor vehicle speeds, placing bollards on rat runs, and charging for parking and road use,” Reid explains.

The book concludes by outlining the compelling cultural, historical, and socioeconomic reasons why the Netherlands is the world’s foremost cycling nation. It is a tale of both empowering the bicycle and taming the automobile, challenging those of us in North America to re-evaluate the steps necessary to create a genuine “bike boom”.

Despite a definite raised interest in riding a bike for transportation in recent years, Reid argues that ridership numbers and government budgets are yet to reflect a true surge towards the mainstream. In order for that to occur, city officials must introduce disincentives that make driving a car much more expensive and much less desirable. Are we willing and able to heed his advice?