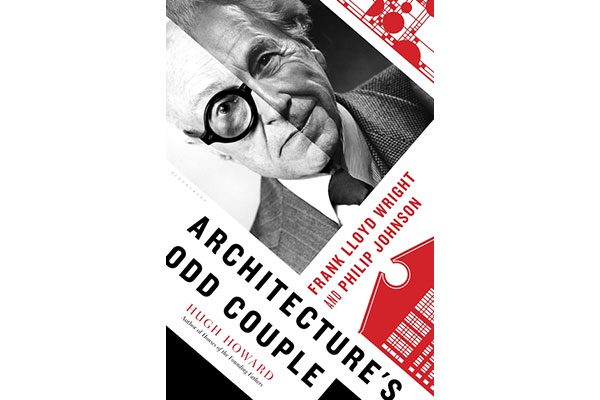 In architectural terms, the twentieth century can be largely summed up with two names: Frank Lloyd Wright and Philip Johnson. Wright (1867-1959) began it with his romantic Prairie Style, Johnson (1906-2005) brought down the curtain with his spare, postmodernist experiments. Between them, they built some of the most admired and discussed buildings in American history. Differing radically in their views on architecture, Wright and Johnson shared a restless creativity, an enormous amount of charisma, and an outspokenness that made each man irresistible to the media. Often publicly at odds, they were the twentieth century’s flint and steel; their repeated encounters over three decades consistently set off sparks.

With the summer of 2017 set to go down as one for the books, what better way to escape than with a biography on two of America’s most notorious architects. While page-turner and biography are not often associated with each other, biographer Hugh Howard has done the unlikely with Architecture’s Odd Couple, interweaving the lives of these two architects in such a way as to provide a lively yet richly informative narrative. Years worth of research gives both architect and non-architect readers a succinct insight into their personalities and accomplishments, and how history in the full Walter Benjamin sense had swept them up together, yielding unanticipated results with often entertaining outcomes.

The book opens with Frank Lloyd Wright dropping in unexpectedly at Johnson’s residence, the infamous Glass House. The maid, unsure what to make of the elderly architect, represents the general population who go about their daily lives for the most part largely ambivalent of architecture, as part of the furniture of our daily existence. Howard, however, as a biographer mostly of American presidents, has here approached his subject with a fresh take, pacing the events of the two men’s lives along with their occasional meetings in such a way that the book is difficult to put down.

And then of course there are the buildings, the real stars of the book, all from the modern architectural canon: Fallingwater, the Guggenheim, the Seagram Building, and the Glass House. Howard provides the back story of each, as well as painting the scene for the founding of such venerable institutions as the MoMA and Taliesin West, the inception of which both Johnson and Wright were present for. And running parallel are the personal stories of the architects themselves, providing the human scale to all their lofty ambition, revealing that the architects at times were wearing no clothes, subject just like the rest of us to the foibles of daily existence.

In the case of Johnson, much of what Howard has based his biography on—especially in his youth—are the letters to his mother while he was traveling overseas and at university. This correspondence was written in a voice that may be gone now from our blogosphere for, although it is more open and inclusive, it has simultaneously become homogeneous and uniform in its enormity, with few voices standing out the way writers like Johnson did with pen and paper. Not only Johnson, but several other architects of the early twentieth century—including Wright and Le Corbusier —wrote extensively, when there existed a more robust philosophical armature to the art of creating buildings.

The book also provides a window into how dramatically our world has changed, painting a picture of early twentieth century America when the preferred mode of continental travel was not by air but rather rail and steamship. When one wrote a letter and put it in the post after which it took weeks to be read and replied to. Such was certainly the set-up for what is one of the book’s most compelling stories, in which Howard recounts how Wright drew up the entire floor plan of Fallingwater in the time it took his client Edgar Kaufmann Sr. to travel to his architecture office by train.

While stories like this are well known to architecture students, there are several others which Howard has done his homework on, such as the numerous variances required to the New York building code, needed in order to realize the incredible interior atrium space in the Guggenheim. Or how Mies van der Rohe was given a cease and desist order during the construction of the Seagram Building as he wasn’t licensed in the state of New York. Howard also points out how the two were at opposite ends of the financial spectrum, with Johnson more or less choosing architecture as a hobby given the fact he didn’t need to work, while Wright grew up on a family farm where he was no stranger to working the land.

With Johnson having made his wealth in his twenties from a living inheritance from his father, one of the wealthiest men in America at the time, Johnson was able to choose which Ivy League school to attend, and built his thesis project—a small suburban house—as an architectural student at Harvard. Wright, in contrast, struggled financially even when his studio was busy at work. When he was short of cash, he would sell what would now be priceless paintings by the famed Hiroshige to make ends meet, along with other Japanese artifacts he acquired while working on his now demolished Imperial Hotel in Tokyo.

These and many other stories make for an enthralling read, and running at 275+ pages along with a few select colour images, this biography is two for the price of one. Given all that is going on in the world right now, it provides a good escape into a simpler time when history was still being made and not just being captured by selfies. That two of the great architectural minds of the last century were not only contemporary but complimentary is the ultimate outcome of Howard’s research, and is sure to appeal to both the architect and non-architect alike.