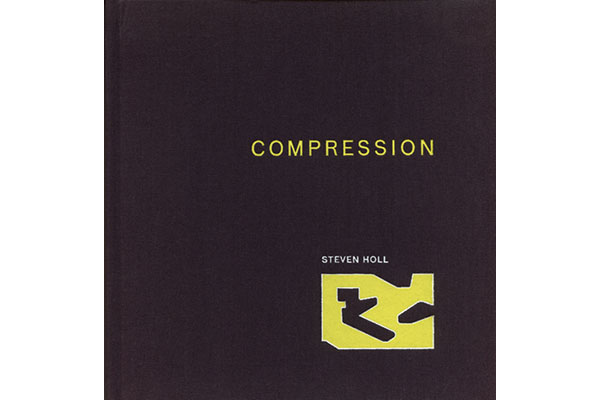 Compression of human habitat should be a concern of all global citizens living on this fragile planet. In my junior year at the University of Washington, the world’s population at that time was exactly half of today’s 7.6 billion. In 2030, it will expand to 8.6 billion; in 2050 9.7 billion… Architecture, planning and environmental preservation play a decisive role in a positive future.

It has now been over thirty years since Steven Holl’s first monograph Anchoring was released by Princeton Press and in the same square format with which here presents the Seattle-based architect’s latest offering. Between that first treatise—groundbreaking for his practice and design philosophy at that time—and this new publication, Compression presents the erudition of a practice that has produced some sixty projects, with thirty-five of them presented here alongside a series of short aphoristic essays, including a closing piece by architectural theorist Sanford Kwinter.

Including several recently acclaimed buildings such as the Hunter’s Point library in Brooklyn and Maggie’s Centre in London, Holl demonstrates the continued pursuit of his particular cut of formalism, tempered with his rigourous phenomenological armature. This is clearly evident in the sketches and diagrams of such recent projects as his hotel and museum complex in Angers, France, along with a new college in Dublin—the latter emulating the shapes of the stones in the famous Giant’s Causeway.

Opening with a brief discussion of the notion of compression, and how it has over the years shaped the literal and figurative explorations of his practice, Holl juxtaposes this with the subjects of his previous book—Anchoring (1989), Intertwining (1996), House (2007), and Urbanisms (2009). With specific reference to his last book that focused on the macro-scale of the city, he sees Compression conversely concerned with the micro-scale, and specifically how architecture activates the imagination.

This subject is also the theme of Sanford Kwinter’s essay that closes the book, The Analogical Relation:

“To understand Compression, we must first remind ourselves what was achieved in Holl’s earlier formulation Anchoring… anchoring is transmitting. It is also a form of extraction or reading and hence expression.”

Holl also notes the importance of grasping the concepts of anchoring, each of which here become launch pads for the essays making up the first thirty pages of the book.

As the architect sees it, his practice has continued to centre around the four core concerns laid out in that first seminal treatise: site, idea, parallax, and material/detail. Not only are these core ideas present in the thirty-five projects featured in the book, they are also the catalyst of discussion in the first portion of Compression called ‘Thinking,’ with an apt quote from Churchill in which he notes how we shape our buildings and they, in turn, shape us.

A prescient quote, and an apt description of the relationship between Holl’s architecture and the world, comprised as it is of a body of work that is as much about the journey as the finished product. For Compression shows that his practice has been able to realize many projects, both big and small, with a number of yet to be realized projects, also included here. Of those recently completed, the book includes the new Reid building at the Glasgow School of Art (2014), as well as a new recently opened contemporary art museum in Richmond, Virginia (2018).

With a timeline comprised of projects from between 2005 and the present, the book includes several art museums in China, many completed and several still in the works. This is a building type that Holl believes to be one of humanity’s most important cultural watermarks: “one of the most powerful urban buildings of our time – a true social condenser of art and cultural education in an open, democratic society.”

Other project highlights in the book include the John F. Kennedy Center Performing Arts expansion (2019), an addition to a museum in Mumbai (2016) and a visual arts building at the University of Iowa (2016). The book is without question a must-have for architects and students who have enjoyed the previous four books by Holl, and is a welcome continuation in the dialogue he began in 1989 with Anchoring, now grounded here with Compression in our current discourse of climate change and environmental stewardship.

Situated along the Hudson River, the waterside elevation of the stunning new Hunter’s Point library provides the graphic for the cover of the book. This new publication from PAP is a breath of fresh air in a time when architecture theory is withering on the vine. With less and less publications to provide a critical mass of voices critiquing our built form, we now must rely on the writers who write on behalf of contemporary architects, such as Deyan Sudjic advocating for Sir Norman Foster. Similarly, Steven Holl has Sanford Kwinter, along with this series of important books to provide a high watermark of our times for architectural theory.

For more information on Compression go to the Princeton Architectural Press website.