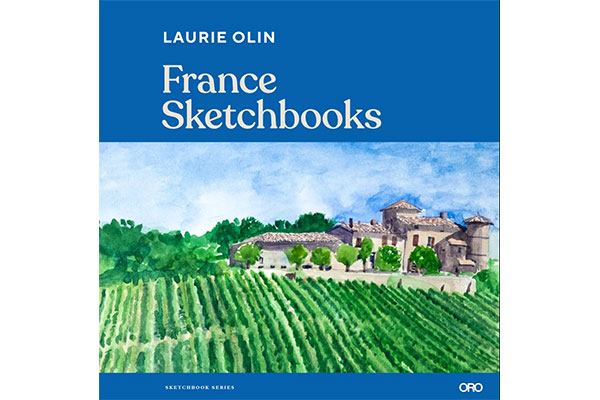 Drawing is about seeing and not wriggling one’s wrist. It is also an act of the mind. Seeing is part of being awake, and perceiving is part of being sentient. In an age of speed, multitasking, mechanical extensions and prostheses of all sorts, and a surfeit of communication, drawing offers an opportunity to slow down and work directly with one’s own eyes, hands, and brain.

At a time when traveling to a far off landscape is nearly impossible, France Sketchbooks transports the reader to Paris and the surrounding countryside in sumptuous detail, capturing in drawings the streets and cafes of the city of lights, combined with wonderful watercolour paintings of the surrounding Provence region. Edited along with award winning book designer Pablo Mandel, Laurie Olin writes in his foreword to the book how there are a number of different reasons why we draw, or as he calls it, ‘the art of looking at something carefully,’ with France Sketchbooks offering up here fifty years’ worth of sketches from over twenty of his sketchbooks. He notes how great painters would often make studies before their final work through careful detail drawings, noting how travel sketches are something different, being as they are ends in themselves.

He also points out in his introduction how he would make many of his sketches in cafes and not restaurants, the latter not being conducive to careful detailed observation like he could get in a street-side café. At a time when many are returning to the art of drawing given the pandemic, such as Dorothy Woodend’s adding her own hand drawings to her Tyee articles, Olin’s book is an instruction manual on observing the details that are often forgotten—likening his drawings to what one sees out of the corner of their eyes.

And like so much that has been written pre-Covid, this new book finds itself situated between the onset of the global pandemic and the great fire that destroyed the roof of Notre Dame, as he includes a drawing he had done of Viollet-le-Duc’s spire in the opening pages of the book but makes no mention of travel restrictions. Despite this, he writes about Paris’ resilience, that it has survived and rebuilt after revolutions, and will do so again post-Covid. Perhaps Olin would say Paris remains the eternal city of hope.

As such, these wonderful drawings of cafes and streets filled with people are bittersweet, but also reminders of the resiliency of the human spirit. Noting in the introduction how some of the earliest sketches in the book go back to his time when he lived in Alaska, he also reveals that drawing is a deeply personal matter, learning as we do how Olin originally wished to be a painter and later studied civil engineering and architecture. His career is a long and illustrious one, with his sketchbooks not commissioned work, simply his own passing of the time.

What is most evident here is his love of Paris, and how he recalls when he first went in 1967, the influence it had on him then, and continued to have for the rest of his career. In addition to sketching in the cafes of Paris, Olin also spent as much time over the years in the many parks in and around the city, revealing his reverence for such landscape architects as Adolphe Alphand, who oversaw the landscape architecture for Baron Haussmann during the nineteenth century.

But Laurie points out it was another landscape architect, Andre Le Notre, who did the parks of Paris, including the Jardin du Luxembourg, along with the grand gardens of Versailles. As an eternal student of where social space and nature interact, Olin points out that there are three great cities to study—Rome, Paris, and London (and in that order). But of all three, it was Paris he returned to the most, despite his admittance of loving Rome more.

The wonderful colour and black and white reproductions of the book are well balanced with a number of short essays Olin has written about the subject cities and towns from which the book’s contents originate. Two of the essays dedicated to Paris itself start the book along with the foreword, while a number of essays on Provence and the region outside Paris make up the end of the book.

And in the book’s closing essay, entitled Envoi, Olin remarks on returning to the city after traveling to it for so long, after seeing the ravishes of the tourist industry upon it, yet still knowing where to go to get away from the tourists to make his drawings. In the end, the book is a testament to the quiet and meditative act of drawing, an activity which requires slowing down from our fast-paced lives:

Moving slowly, often on foot, and sitting still quietly – a requirement for the observation necessary to make drawings – can provide experience and perspective, a degree of understanding and appreciation that shopping, taking selfies, and passing through airports never will.

And as his closing observation, he notes how the trees have regrown at the Sceaux, one of his favourite landscape designs by Le Notre, and which was devastated by the 1999 hurricanes. Olin surmises that the roof and spire of Notre Dame so too will come back, though not after much debate.

Whether you’ve been to France or not—and I am grateful for my two visits—this book has the ability to transport one there until such time that we can safely again board airplanes. And for others, the book may trigger the desire to take up drawing, offering a lesson in the details that make up a drawing of one’s surrounding landscape, whether urban or rural. And for architects and landscape architects alike, this book is a visual treasure capturing in loving detail one of the most picturesque cities in the world. Sadly, coming at a time when the streets and cafes are empty, the book is also a beacon of hope that the crowds will one day return.