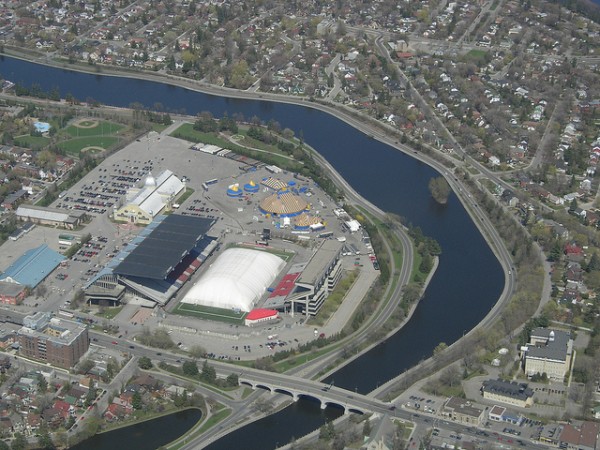 Last month, the Ontario Court of Appeal ruled that as a matter of law under the present Ontario Municipal Act, the City’s June 2010 decision to move ahead on development of Lansdowne Park by the Ottawa Sports & Entertainment Group (OSEG) was OK, despite financial errors that would need to be corrected.

Earlier, the City had cancelled its own public design competition for the Park, to become a partner proponent with OSEG, without competition, of a development project that would turn control of most of the park over to private commercial development — predominantly high intensity retail, residential and entertainment, with a promise of return of CFL football as the draw.

In an op-ed following the Court ruling, the head of the Friends of Lansdowne detailed improvements needed in the deal:

1) clearer financial information and projections and Council accountability on costs to taxpayers;

2) definition and long term protection of the promised public benefits;

3) assured ongoing public voice in the governance of Lansdowne as a public asset.

This long story about a focused private push to take over an irreplaceable public asset in Canada’s capital will be one of the best-documented, fully elaborated, and professionally analyzed stories of its kind. All its dimensions  —  financial, design, public-private, citizenship and governance, and more — have been brought into play.

It isn’t over — one way or another.

It will go on on the ground. In something like the still-unfolding OSEG plans. Or in something more like the Lansdowne Park Conservancy (LPC) proposal, which has now become a clear realizable alternative vision. It demonstrates that with a different mix of benefits, the city can do more for public good regionally and locally, and support a wider base of regional and local commercial interests instead of a narrower set of financial interests in uptown Ottawa with associated international store chains.

It will go on in stories. Some will continue to be told as popular tales, in media and word of mouth. Some will be gathered and referred to as cautionary and positive examples in city governance, in professional planning and architecture and design. Some will add to civic activists’ kits for pragmatic stewardship of the public interest in municipalities anywhere. Some will become guidelines for both prudence and boldness in city vision and development. Some will become pointed reference material for mayors and municipalities about structuring private-public partnerships. Some will be grist for fuller and increasingly realistic academic understanding and teaching about urban issues.

The complementary roles of city staff and city council in the evolution of this initiative is a key but so far under-explored area.

Ottawa citizens are doing persistent, creative, and good-humoured work to replace the initial narrow commercial motive and vision with authentic multi-dimensional city planning and management. It’s inspiring. People are acting as individuals, and as groups with a full range of geographic and professional interests and responsibilities. Their attention is scoped at scales from neighbourhood, to regional city, to provincial.

The fundamental issue is ensuring the vitality of city taxpayers’ public interest, in a healthy competitive world. The Court’s decision moves it to a new level for all of us: provincial reform and updating of the Ontario Municipal Act.