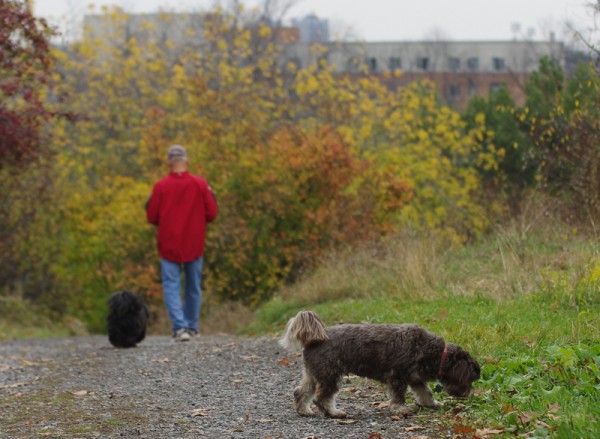 You’ve heard the news: get your Vitamin N, enjoy a forest-bath, and reconnect with ‘green’ for higher productivity. We are constantly being told that now is the time to get the most out of nature, and this prevalent concept, know as the biophilic movement*, seems to be giving us our proverbial boots and garden hoes, and pointing us in the right direction – out.

But what does all this cultural urging really mean to us as individuals and how can the opportunities to be “exposed” to nature increase for urban dwellers?  Is it possible to be saved even while pounding the pavement in our concrete jungle? Some believe that we must create more opportunities to find the wild within the city limits since it is the city where you can find most of us**.  And it seems that with the emergence of community gardens, green roofs, and natural looking storm water management ponds this is happening whether it’s part of an intentional biophilic movement or not.  Urban dwellers are starting to demand, search and create ways to add some sun, park, and plants to their everyday lives but these activities are still few and far between.  Many others still do not have easy access to green spaces that would allow them to get away from their desks and couches and four-wheeled lives.

What would a biophilic development look like then? Retrofitting is one of the key methods for introducing these biophilic principles and projects in cities around the world, as practitioners are working with a built landscape, envisioning a new green layer on top of the grey one.  And it can be done. Our natural environment has shown itself to be resilient, resourceful, and in the end unstoppable.  If it can grow up cliffs and re-emerge in nuclear fall-out spaces, nature can carve itself a spot within the cities that we now know. And it can adapt, just as many of the creatures that live along the borders of our demarcated asphalt kingdoms have demonstrated that they too can survive. And we, as urban dwellers, can benefit in so many ways as we learn to live “with” rather than “away” from the flora and fauna that once existed where our cities are now built. 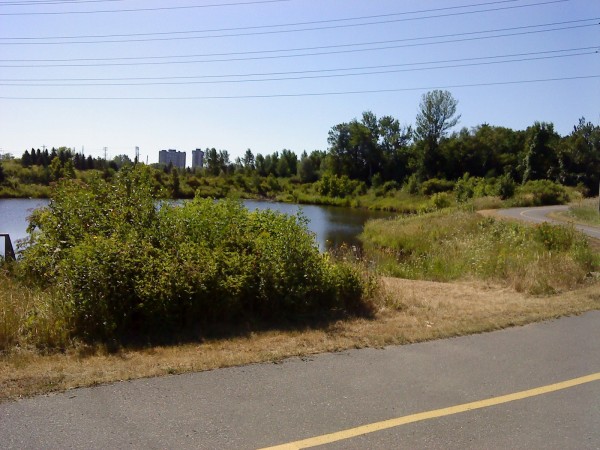 But what if there was an opportunity within the urban core to build where there were no streets and buildings to design around?  What if there was a piece of land where green space could still be found between the blocks of city design?  Many urban areas have brownfields where nature has been left to its own devices to reshape deserted lands, some have been redesigned and redeveloped to high sustainable standards, but more could be done to enrich the ecological component of these developments.  Ottawa itself has an opportunity to create this type of biophilic development with the much talked about Rockcliffe Lands.

Rockcliffe Lands (as currently named) is a very unique urban property situated along major green corridors, with great links to the Ottawa River and other small urban water bodies. It is bookended on a diagonal by two urban wood lots (each around four hectares) and has a scattering of escarpment and rocky outcroppings that encourage fresh eyes and fresh thinking. With a yearly influx of birds, both native and migrating, who visit and/or dwell in the area, and a mixture of other wildlife that dwells a midst the green corridors that link this spot to the city’s greenbelt, it is an incredible opportunity to showcase a build-out of biophilic design principles in a capital city.

This could be a place where thousands of new urbanites commune with birds of all kinds and find themselves dwelling under the peaceful arms of resident native heritage trees (despite it being a new development).  A walk down the street could include a visit to pollinator gardens and chimney swift towers, or a tour of the local constructed wetland to enjoy a chorus of mating frogs.  It has been shown that people are less stressed, more productive, and indeed even happier after being out in nature.  There are even studies that have seen increased healing rates in hospitals when views of green space are available.  Nature provides many ecological services that benefit those residing close by including cleaner air and water, storm water management, pollination of local fruits and flowers, reduction of air-borne insects (including mosquitoes), and slope stabilization to name just a few. By working with what nature is already providing, those living in newly developed areas can benefit in many ways. 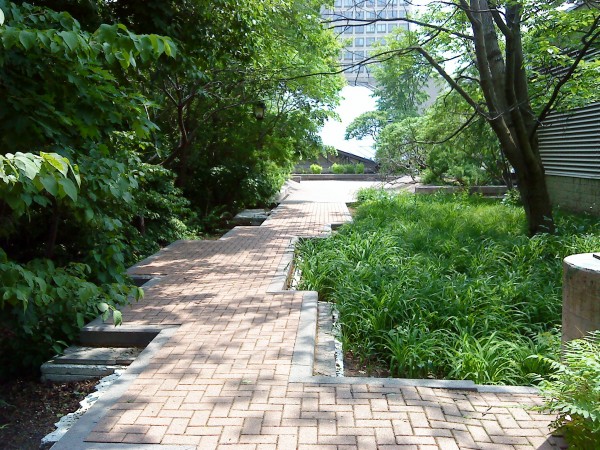 There are many opportunities to include biophilic design into this development but let’s consider three for now.  First and foremost the heritage trees on the property that are currently there should be protected, as they are a valuable asset for the new development. A large portion of the property’s trees are Silver and Sugar Maples, many with a diameter of over 50 cms. By saving 30 of those trees, they would sequester 450,000 litres of rain water and reduce atmospheric carbon by 13500 kilograms according to the National Tree Benefit Calculator. This is just a portion of what the community could benefit from as there are over 100 individual trees listed in the arborist’s Vegetative Survey report. And these trees should not only be protected but nurtured. Construction activities and practices can be very stressful for trees and soil compaction can damage their ability to take in nutrients and grow vigorously. Roots can be damaged if the ground up to their dripline (the edge of the canopy above) is not protected and even fumes from construction vehicles can impact tree health. Beyond construction, these trees need to be designated as public assets, something to consider as the developers redraw lines for streets and property lines, so as to protect them from being cutting down by private property owners.

The two urban wood lots should also be expanded, buffered, and revitalized. By expanding the Montfort Woods to 10 hectares, the City of Ottawa would gain an urban forest with a denser interior, and which could function in a self-sustaining manner. Urban forests provide similar benefits as individual trees (storm water retention, carbon reduction, etc.) but also create a green sink within the city where the air is cooler, the ground moister, and the biodiversity richer. This verdant retreat will improve air quality, provide habitat for various flora and fauna, allow for easier links along the green corridors in this area, and offer a place for both passive and active recreation. Ten hectares with a buffer of smaller trees and shrubs around the forest will allow this ecosystem both elevated function and health. Ecological practitioners recommend 100 meters of an ecotone (transitional zone) so that integrity and resilience can be nurtured in the core, and these types of large urban wood lots can also attract specific species of birds that are attracted to denser forests and provide resting stops for those migrating to more northern locales.

One other key element to creating a biophilic development is eliminating as many dangers as possible for the various fauna that will find themselves moving along these corridors and core habitats. This can include banning pesticides and insecticides that may kill various beneficial insects, purchasing organic, native plants for public parks and gardens (rather than store-bought flowers that could be covered in pesticides), reducing wildlife and vehicle collisions in new and innovative ways, and ensuring that “Minimum Building Requirements” include Bird Safe Building Design (such as those found in Toronto).  There are many birds attracted to this area due to the green spaces including Kettle Island, Manor Park Marsh, and the green corridor buffering the Ottawa River and the Aviation Parkway, and these safe building designs that include standards for light pollution, window glass, and ventilation grates would ensure that birds within and around the Rockcliffe Lands development would have minimal collisions with buildings. 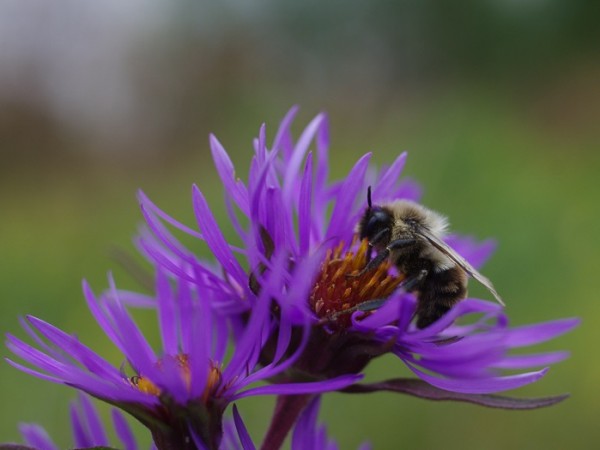 There are many other ways to introduce biophilic design to this redevelopment in the capital city including dark skies lighting, supportive by-laws for naturalized private gardens, habitat for fauna including chimney swift towers and bat houses to name a few. And if Ottawa can lead the way and demonstrate the advantages and ease of adding these ecological considerations to a redevelopment, others can follow. Biophilic developments may require new approaches to age old design practices, but by investing in them, cities will repeat the benefits of “free” environmental and cultural services, and as cities retrofit to increase the density of flora and fauna in their blocks, tucked away in corners, and found alongside skyscrapers all types of urban dwellers (both human and animal) will find that it is possible to flourish side by side. In the end what is evident is that it is a natural choice – a return to our own roots per se – as just one creature in the ever complex ecological web of life.

* Key figures and leaders in the biophilic movement: Richard Louv (Last Child in the Woods), Timothy Beatley (Nature of Cities), and David Suzuki (The 30 x 30 Challenge), organizations such as Local Governments for Sustainability, and the Convention of Biological Diversity, nature writers Lyanda Lynn Haupt (Urban Beastiary), and Lisa Couturier (The Hopes of Snakes), and authors Elizabeth Gilbert (The Signature of all Things) and Cheryl Strayed (Wild).

** “With the majority of people in North America living in urban areas (81% in Canada), cities are areas of concentrated production and consumption of goods and services and thus key actors for environmental issues.” – United Nations Environment Programme

Katherine’s curiosity and interest in the flora and fauna surrounding her propelled her to make a mid-life career change to study Ecosystem Management. Newly graduated in 2013, she is volunteering with two organizations ( bird habitat and plant ecology), determining a follow-up to the Ottawa Urban Wild Tours initiative, which she co-founded in 2011 with Julie Hong, and learning and writing about urban ecology at her blog entitled dandelions and concrete. She lives with her husband Viliam and their indoor cat Max, in an older central neighbourhood of Ottawa, close to a swimming pond, a small marsh, and other green spaces that she can explore.