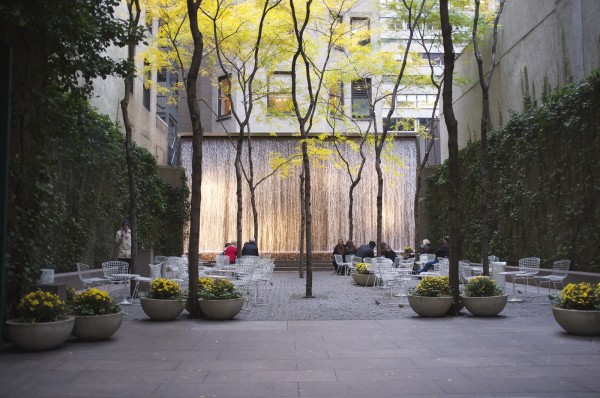 With the growing urban design trend of pocket parks, where miniature leftover city spaces are adapted to become little urban oases, a city so plentiful in tradition parks, such as Ottawa, could expand its horizons through shifting its idea of what a park can be. For while Confederation is leafy, and Sparks is meant to encourage you to move through space, pocket parks are places for gathering and rest, all within a few steps of the bustling city.

Not to be confused with pop-up parks, pocket parks act as, at least semi-permanent, infill projects which can become integral and memorable spaces within the city, and add to the quality of experience for those who work, live, or pass through the area. Often partially hidden or obscure in their location, these parks also become points of pride for those who have discovered them, and can change the overall understanding of formerly a neglected site.

Paley Park in New York City, one of the best examples of such parks, and tucked away just a few steps from bustling 5th Avenue, is complex in its simplicity. Taking cues from Central Park, Paley seeks to invite its visitors in as it works to buffer the sounds and sights of the surrounding city. Sandwiched between adjacent buildings, the hard concrete walls act as barriers and embrace the urban park.

Comprised solely of a flat concrete surface, and animated through a grid of strikingly slender and leafy honey locust trees, white wire-frame chairs, café tables and a wall of rushing water, Paley is a soothing space for the soul. Whether being used as a lunch spot between meetings, place to rest tired feet after a day of shopping, or simply to be alone in a city of so many, the minimalism and juxtaposition of textures and hard/soft elements gives Paley its rhythm and rest.

But how, and where, could Ottawa experiment with such a concept as the pocket park? Where do you think is the perfect forgotten site for such a space? If located near downtown Bank Street, could it help in its efforts to remain a vital retail district? Should it be within a short walk of Parliament? Or is there a place a little more off the beaten path, that is still urban enough to maintain its oasis qualities?

And what elements could be included in the design of such a park? Would you eat your lunch, rest your feet, or meet your friend in such a spot? Do you think a pocket park could be an innovative way to encourage urban living in Ottawa?

We want to hear/see your ideas and thoughts on what an Ottawa pocket park could be.