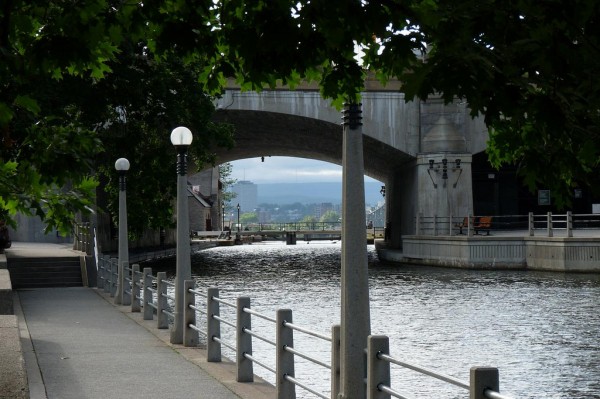 A recurring topic of discourse and debate currently taking place in Ottawa, and as noted in many recent articles on Spacing Ottawa, is how to better use and ‘animate’ the shorelines of our multiple, and rich, waterfronts – from the Rideau Canal, to the Ottawa and Rideau Rivers. It was this question, however, that was the focus of a recent Master of Urban and Regional Planning Project Course at Queen’s University, lead by Professor Dr David Gordon

According to Gordon, “The workshop course was sponsored by the City of Ottawa and inspired by the recent tactical urbanism projects like 8 Locks Flat,” noting that the canal lacks animation other than at specific times such as Winterlude. As such, the course worked to bring together students with public and private sector clients as a way to bridge theory and practical skills within a relevant and meaningful scenario, leading to a contributive report.

The report speaks to the place-making potential of the canal, as well as future changes to the land adjacent to to it, including Lansdowne Park and and the University LRT station, in addition to noting weaknesses and challenges currently manifesting themselves.

According to the report, “Several sources of information contributed to the Animating the Rideau Canal project, including a site visit and consultation with the City of Ottawa, the National Capital Commission and Parks Canada. Additionally the existing conditions and policies governing the Canal were analysed and compared with 28 national and international precedents of waterways and interventions. These findings were then built upon in a design charette that was attended by various land use planning and urban design professionals. Lastly, six key stakeholders were identified and interviewed for a local perspective.”

In addition, much of the report looks at interesting international precedents, and subtly suggests that it is time for Ottawa to elevate its own status as a waterfront-city. The report also includes detailed notes from the design charette, concluding with short-term, medium-term, and long-term recommendations.

Released in January, the over 200-page, image-rich, document can be viewed in its entirety here.