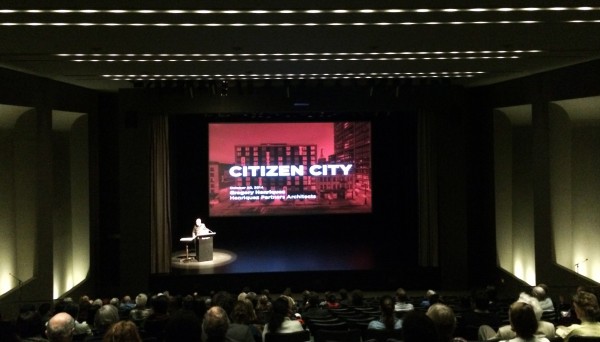 Last Monday, October 20th, 2014, saw the second lecture in the Azrieli School’s Forum Lecture Series, bringing architect and Carleton alumni Gregory Henriquez back to Ottawa as a part of the Alumni Week lineup of events.

Vancouver-based Henriquez, who opened his lecture by commenting on how much more connected he feels to Canada during his times in Ottawa, made the case for local architecture, and the local architect – stressing the importance of being rooted in one’s community in order to do the most social good. And it is the idea of social justice through architecture that is at the core of Henriquez’s practice, Henriquez Partners Architects, as the three stages of his work attested to in various ways through the eleven projects presented.

Henriquez, however, first spent time discussing his thoughts on the well-rounded architect; being one more connected with the local social justice of their city than concerning themselves with the larger global mega-practice. This was a theme throughout the night, and Henriquez noted that almost all of his projects are within walking distance from his office, save for one or two longer walks, and a new project in Toronto – working on the Honest Ed’s site. Even more evident, however, was Henriquez’s belief that architects could engage in meaningful collaborations with developers, in order to “harness the greed of developers to do good in the world.”

This concept and ideology is at the heart of Henriquez’s more recent work, and a book currently in the works titled “Citizen City”, which focuses on the possibilities of public/private partnerships between developers and architects, as well as NGOs and non-profits. This has come out of the fact that Vancouver is now nearing a crisis state in regards to affordable housing and living costs, with the Downtown Eastside (DTES) of Vancouver often noted as Canada’s poorest urban postal code, while multi-million dollar properties sit just blocks away from subsidized single room occupancy units (SROs)

This has resulted in density becoming a commodity to be bought and sold for a great profit, but requires us, as Henriquez pointed out, to ask ourselves what are the public benefits and social consequences of this form of density? Under these pretenses, Henriquez then began a walk-through of some of his most important works, noting that he sees his portfolio in three distinct phases – projects up until his work on the Woodward’s Redevelopment (mainly social housing, community centres, and the like), Woodward’s (his first project working with a developer), and the ‘children of Woodward’s’ (where Henriquez has used his developer-relations experience to design projects which are both profitable and philanthropic).

The first project of the night was Bruce Eriksen Place, a social housing project located in the DTES, which uses words carved into the building’s façade, as well as murals, to evoke ideas of dwelling, identity, and community. As Henriquez took us on a tour of a few of these pre-Woodward’s projects, he also shared images and stories of some of the residents who have since inhabited the building, as well as noted that this project was a turning point in his career where he came to realize that he could help to change peoples’ lives for the better as an architect. This led to further work in the DTES, before he landed, unexpectedly, the Woodward’s Redevelopment.

A former department store which had sent empty, save for some squatters, since the chain went bankrupt in 1996, the Woodward’s building sits at a geographical crossroads where the two city grids of Vancouver come together, as well as a social junction, where welfare meets the wealthy. As such, the sensitive, yet crucial socio-political, as well as urban and architectural considerations the redevelopment required were plentiful.

What resulted was a mixed-use, mixed-income, four tower development with a shared podium and public realm. The project incorporated approximately 530 market housing units, 125 singles non-market housing units (SRO replacement units), and 75 non-market family housing units, run in conjunction with the Portland Hotel Society, and developed by Ian Gillespie (who Henriquez refers to as his patron) of Westbank Projects/Peterson Investment Group.

The most significant space, however, is not the commercial component or private units, whether marked or non-market, but rather the train station-like public space, which includes a Stan Douglas photograph of a reenactment of the Gastown Riots, a basketball net used by youth in the neighbourhood, as well as a large open space that allows for pedestrian access, shelter from the rain and cold, as well as a place to feed the homeless.

The success of Woodward’s as a model for private/public partnerships then led to what Henriquez refers to as the children of Woodward’s. These projects include works such as 6th and Fir, where Henriquez learned to always ask what the intention is behind a guideline or rule, and as a result was able to have the zoning amended for the building height once they pointed out that their site would not block views of the mountains, thus making an under utilized, and unprofitable site, the perfect place for a residential tower.

60 West Cordova then become an “experiment in affordable ownership”, as it originally enforced a clause preventing owners from renting their condos so that all units would be owner-occupied, and to avoid it becoming a place for foreign investment profits – with density being an ever increasing commodity in Vancouver. This allowed for affordable housing, and encouraged greater ownership in the area, with12 units sold at cost through a non-profit, and at a fixed inflation rate. Henriquez noted, however, that this may have worked better in theory than practice, but can still be seen as acting as a model for affordable housing.

And finally, 250 Powell detailed how a prison, which was ironically designed by his father in the 1970s, could be reinvented to become social housing, in an attempt to help end homelessness in the city, and resulting in a jail yard now working as a community garden.

But Henriquez did not stop there, referring to the recent coming down of a tent city protest in Oppenheimer Park in the DTES. Henriquez pointed to events such as this as signaling a need to think critically about how we are addressing the housing shortage and affordable living crisis. He then showed renderings of his yet-unbuilt Stop Gap Housing modular units, which be believes could help to provide both shelter and dignity to Vancouver’s marginalized communities. Yet, while the project has received much criticism, Henriquez stands behind it whole-heartedly, indicating that no other solution has been put forth, and the problems around homelessness continue.

Most telling, however, was Henriquez’s earlier remark while showing diagrammatic cross sections of the renovation work he performed on the 100 year old York Theatre. While doing so he explained that he would now “digress into architecture for a second…” resulting in a chuckle from the audience, but also indicated how very much social justice is at the forefront of his work. The architecture largely spoke for itself throughout the night, for what was most pressing, and most interesting, was not the detailing of the brick or layout of the plans, but rather the people for whom it was being built, and the ways in which it was achieved. And it is for these reasons that Henriquez’s work can in fact be seen to be upstanding ‘citizens’ of the ‘city’ in their own right.