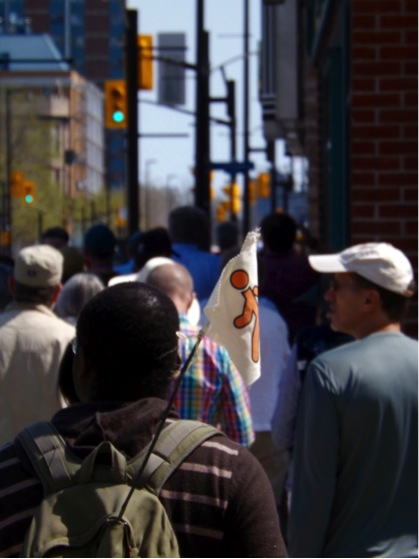 In a winter city like Ottawa, spring is a time for awakening and renewal. It’s also a great time to get out and explore the city on foot. For those purposes, the weather this past weekend could not have been better. For the uninitialized, Jane’s Walks are a series of walking tours named after urban activist and writer Jane Jacobs. Following her death in 2006, a group of friends decided to honour her with a series of walking tours. They are held annually, on the first weekend of May, which lines up with her birthday.

Ottawans have always been relatively enthusiastic about the event. The first Jane’s Walks in the city were held in 2008 and have steadily increased in popularity. This year’s edition featured more than sixty walks and had an attendance of 1,800. Far from being limited to historical interests, this year’s edition featured walks highlighting urban foraging, the turtles of Petrie Island, and even a canoe tour at Burritt’s Rapids. Community-building, after all, isn’t entirely a matter of roads and buildings, but as Benedict Anderson may suggest, it’s also product of our imagination. The strongest neighbourhoods are the ones in which we may share our stories and experiences. The Jane’s Walks, then, are an excellent way to get together and uncover the sea of narratives that make our communities.

I was pleased to be able to attend three of the walks; one on Saturday and two on Sunday. The first, lead by Robert Hatfield of the Workers History Museum, was a labour-themed tour around the Parliamentary Precinct. The second was Chris Bradshaw and Peter Ferguson’s well-attended and highly-popular tour of the Uptown Rideau neighbourhood, in which changes – both historical and impending – were highlighted. Finally, there was Colin White and Liam Mooney‘s tour of Bank Street entitled Illustrating Change, a play on Colin’s popular sketches and a tour which split the focus between the subtle changes made to Bank over the last decade or so and of the very exciting possibilities that are yet to come.

Although the walk leaders’ offerings may have all differed in tone, content, delivery, and focus, it was amply clear that they were all motivated by a love for their neighbourhoods. Whether it was the stories, remarking the changes, or a wish to protect what exists today, there was no indifference in the crowd. In this sense, the spirit of Jane Jacobs was strong. 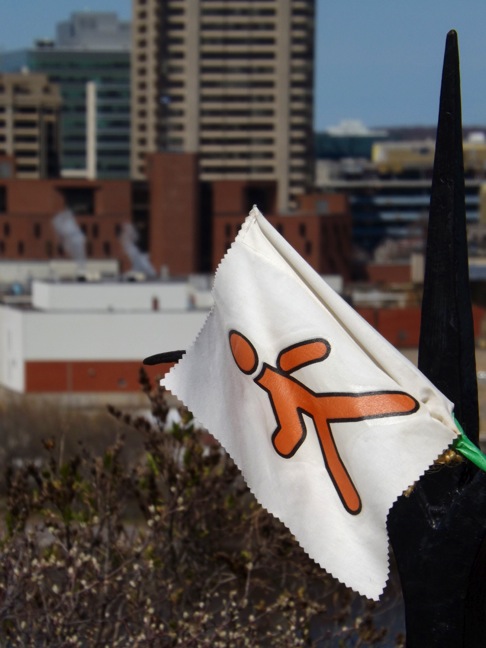 There was no better location to hear tales of labour organization in the city.

I began the weekend with Robert Hatfield of the Workers History Museum’s short tour in the Parliamentary precinct. As we’re most keenly aware of the built environment on those occasions that we do stop and smell the roses, the theme of labour was an excellent way to start the Jane’s Walk weekend. As we met in front on the popular Oscar Peterson statue outside of the National Arts Centre, the group began to collect.

It was on this tour that we hit the Ottawa historical classics. Under bright morning sun, Hatfield began with the construction of the Rideau Canal, during which Malaria took the lives of hundreds, in addition to construction accidents. We then proceeded to the Valiants Memorial, where the story of operator heroism when a street car lost control was entertainingly recounted. We continued with a brief stop across the street to appreciate the view of the Locks, and to illustrate more the canal’s construction.

We then proceeded to the shade of the East Block of Parliament, where Hatfield spoke about the choice of Ottawa as the capital and of the construction of the buildings. Like most construction at the time, it was a considerably dangerous job with many accidents taking lives. The mortality on site was nevertheless striking and workers were catalyzed into organizing in Ottawa for the first time. 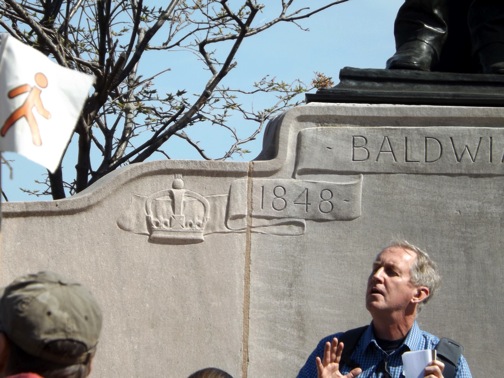 While at Parliament, we crossed paths with Brian McDougall’s well-attended Unauthorized History of Parliament Hill.

Ottawa’s labour history cannot be spoken of without either the government or the lumber and paper industries and there is, of course, no better setting in which to learn about them than on the Hill. Truly in his wheelhouse, Hatfield recounted the organization of the Public Service of Canada. Of course, Ottawa was not initially developed as a government town and he saved the best for last: the mills of the Chaudière industrial complex. The focus here was on the story of les allumetières, the young match girls who, faced with some of the worst occupational hazards in the region, struck twice in 1919 and 1924 in order to improve conditions. Their bravery was recognized at the municipal level in 2007. 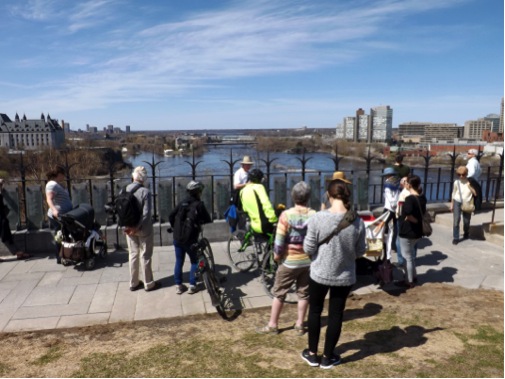 The walk ended with this beautiful vista.

Sunday’s walks were all about change. Bright-eyed and bushy-tailed on Sunday morning, I made my way to Chris Bradshaw and Peter Ferguson’s walk through the Uptown Rideau neighbourhood (that’s Rideau, east of King Edward). I was keen to attend this walk, as I have written about the neighbourhood in the past and wanted to have more layers added to my understanding. I certainly wasn’t disappointed and the blending of old and new by Chris and Peter certainly added depth and nuance. It was also, not coincidentally, an excellent demonstration of the neighbourhood’s feel. It really does seem that Uptown Rideau has never not been in flux and the walk’s title of Main Street Interrupted was certainly a fitting one. 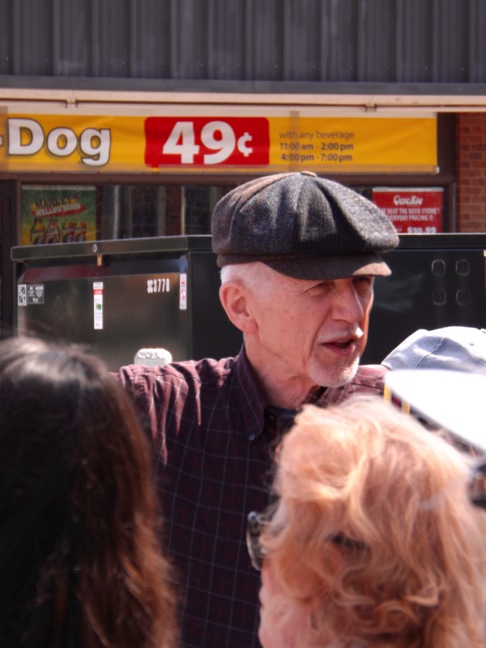 Chris Bradshaw informs the crowd about the state of affairs at the corner of Rideau and Augusta.

We began our tour in front of the Rideau Branch of the Ottawa Public library, where the format was laid out and the current state of affairs was established. The recent redesign and reconstruction of Rideau was pointed out as a hopeful sign of a bright future. Interwoven with the historical highlights was discussion about the Community Design Plan and the development proposals currently in existence on the stretch. 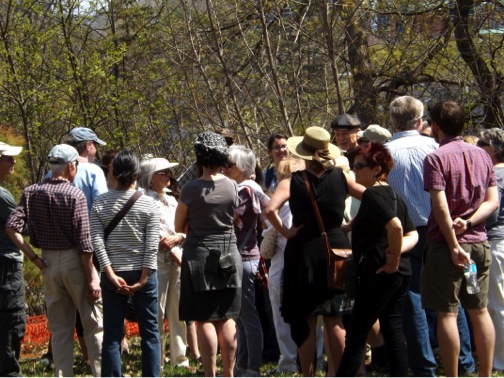 We ended at Besserer Park, where some improvements were recently made.

The walk backtracked to the small seating area adjacent to the Shopper’s Drug Mart, where developments past and present were highlighted. From the Bourque Building, to the legendary Bytowne Theatre, we were transported back fifty years. We proceeded to head back east, with stops at Friel (the old Beer Store, the hulking Bell Telephone switching office, Pestalozzi College), Chapel (the redevelopment of the Beth Shalom property), Augusta (the former Korean grocery), Cobourg (Rideau Mews), Charlotte (where Yre’s Chicken once stood, now a temporary park), Macdonald Gardens Park, and we ended with the newly refurbished Besserer Park, where homes once stood. 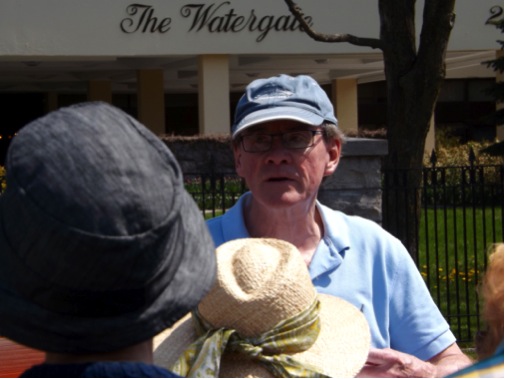 Peter Ferguson discusses the blend of the past and the future on Wurtemburg street.

The last walk I participated in was, in many ways, the one I was looking most forward to. As someone who moved to Ottawa about fifteen years ago and have spent most of my time living in and around Centretown, of the tours I chose, Illustrating Change hit closest to home. Bank is one of those streets that has reliably captured my imagination – from late nights at Barrymore’s to breakfasts at the now long-gone El Morocco Restaurant (the sign in particular is missed), I have spent much time observing the largely subtle changes. 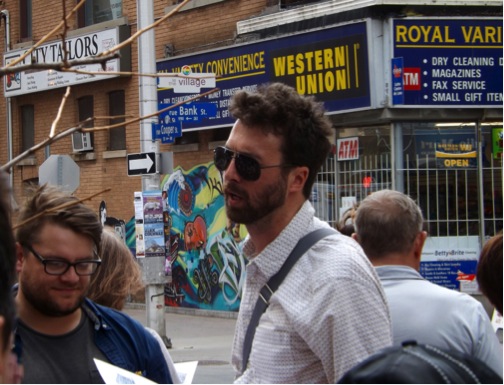 As it would turn out, so has Colin White, who arrived in the city not that long after I did. We began the walk at the corner of Bank and Argyle, just outside of what was Ada’s Diner, but now Wilf & Ada’s. Looking at Bank street, the changes have been, relative to others, quite subtle. Businesses open and close, the occasional building burns down, and the street was even torn up. If you’ve seen Colin’s sketches, you’ll see that signage is one of his loves. Older signs tend to add a certain visual appeal to the streetscape and it often feels like a loss when they disappear. India Importers, Don Alfonso, and more were pointed out. It never ceases to amaze, just how far away the recent past can seem, but White has the uncanny ability to bring it all right back.

Much like the Uptown Rideau tour, White and Mooney’s Bank Street tour also cast our gaze forward into the future. What will Bank become? What could it become? The opportunities for Bank are seemingly limitless. As a street that has been largely resistant to the sort of gentrification that others have experienced, creative uses are perhaps more possible. Not to mention more exciting. To that end, we were taken through the alley behind Barrymore’s. Alleyways are public spaces with much potential for use and many cities have begun to make use of them. Small cafés, performance spaces, or even commercial potential. The sky is the limit in such a small place. 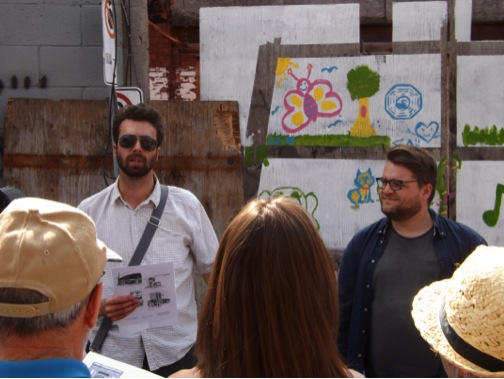 We perhaps spent the most time behind Somerset House. A vacant shell for about seven years, the community is anxious to see some life return.

If there was any one stop on the tour that provoked the most discussion, it was Somerset House. As most Centretowners are aware, it has been a shell for about seven years now. Between accidents, litigation, and bad blood between its owner and the city, we’ve this grand old building with limitless potential. Where some envision a large and exclusive retailer to attract dollars to the neighbourhood, others see a sort of mixed use hub with small retailers, community space, and more artistic uses. While nobody shared precisely the same vision, it was clear that we’d all like to see some activity on the corner.

We finished the walking tour at the corner of Bank and Nepean, taking in the entertaining jumble of signs, bay windows, fire escapes, and balconies at the rear of the Carisbrooke Annex apartments. The interest in the crowd was captivated and dozens lingered behind. The passion and enthusiasm of both Colin and Liam for Bank Street, and Centretown in general, were clearly contagious.