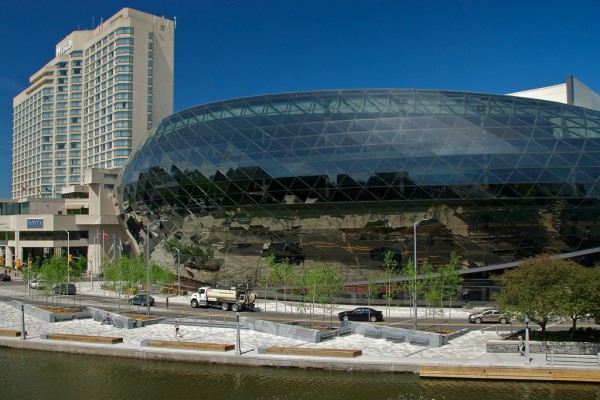 Despite this most people, myself included, are hesitant about change because we are comfortable with what we have and where we are but like it or not change is all around us.  We learn and grow from change, and we change because we have grown and learned something. The daily changes in our lives, unless it is life altering may be so subtle they go unnoticed. This can carry on for years until, after reflection, you realize how significantly different things really are. I think this is true in life and it is true for cities as well.

With smart phones it is easy to get lost in our technology and forget about the environment around us. I doubt I’m the only one who has walked to my destination, only poking my head up periodically to look out for obstacles, while checking emails, texting, or glancing at the news. There is a reward in finding something new or different in the city; a sense of satisfaction knowing you’re in “the loop.” If I catch myself getting lost in technology while I’m out for a walk I will stop and challenge myself to take in my surroundings.

The magnitude of change that happens in a city each year isn’t always immediately obvious. Yet, when you stop to think about the changes that have occurred in the last 5 to 7 years, it is surprising what has been completed and the projects that have started and remain underway.

It seems like only yesterday that citizens were up in arms about the Lansdowne redevelopment but now it stands built and it has already integrated into the fabric of the city – albeit, not without some growing pains. It has become a node in the city drawing people to the venue and the surrounding area. It also added a considerable amount of new housing stock in areas (the Glebe and Ottawa South) that are defined by their established neighborhoods.

Also, like Lansdowne, just steps from the canal, is another landmark that received a major facelift in recent years. The transformative design by BBB Architects of the Ottawa Conference Centre (now known as the Shaw Centre) is now a statement piece of the downtown core. The convex glass façade was, at the time, a new addition to the Ottawa design aesthetic and a welcome change.

Neighboring the new Conference Centre, the Rideau Centre shopping mall is nearing the completion of a $360-million redevelopment project with rejuvenated presence on Rideau Street and an overhaul of the interior spaces, most noticeable to-date is the food court.

Looking ahead to some significant projects that will further reshape the urban landscape of Ottawa, one can’t help but think about 3 projects in particular; the Arts Court/Ottawa Art Gallery redevelopment and expansion, the ZIBI development of the Domtar lands on Chaudiere and Albert Islands, and, perhaps most obvious, the Light Rail Transit line.

The partnership between the City and developers in order to break ground on the Arts Court redevelopment will hopefully yield the next architectural landmark of the downtown core. The proposal itself seems to offer something for everyone; the Ottawa arts community will get a much larger gallery that will get to showcase local work in addition to its vast collection. It also includes space for the creation and production of new work in addition to a Black-box theatre for the University of Ottawa theatre program.

In addition to becoming another hub for Ottawa’s creative community the building will be animated outside gallery hours with 12 storeys dedicated to a boutique hotel and the remaining 8 storeys of the tower to be sold as condos. The redevelopment project designed by the joint venture team Barry Padolsky Inc. Architects / KPMB Architects is expected to open its doors in time to celebrate Canada’s 150th birthday.

Just outside of the downtown core the ZIBI proposal also promises to be one of the most significant in Capital region once it gets under way. Straddling Booth Street this redevelopment project will form part of the gateway between Ottawa and Gatineau. This multi-building proposal is an exercise in community creation as it must strike a balance between live, work, and play across the islands. There is no doubt that this development will become an attraction for locals and tourists alike.

Lastly, the expansion of light rail East and West passing through downtown, and connecting to the North-South Trillium line (O-Train) is without question the biggest step forward in the evolution of the Ottawa. It seems like we have waited forever for this, and while we continue wait impatiently for the new transit line to open I like to think about what new opportunities lay in the future as a result of this project.

As mentioned earlier, we learn and grow from change and we change because we have grown and learned something. I think this is especially true for cities. Each of the projects I have talked about represents part of the growth of our great city by building on the projects that came before them. Granted, there have been missteps along the way but these become the lessons learned embodied in each project that will help Ottawa continue to grow in the right way.

Despite my hesitations and reservations I remind myself that change is good. That doesn’t mean that I notice or agree with all forms of change, but it is something that I have come to appreciate. If we expect Ottawa to take up the mantle of a world class city, we should all come to grips with change and push for development or redevelopment that supports it.

yowLAB is Ottawa’s architecture and design ideas lab, fostering and supporting collaborations and exchange of ideas in the community. Follow them on twitter @yow_LAB and on facebook.com/yowlab. UrbSanity is also published by Centretown Buzz and supported by the Canada Council for the Arts.