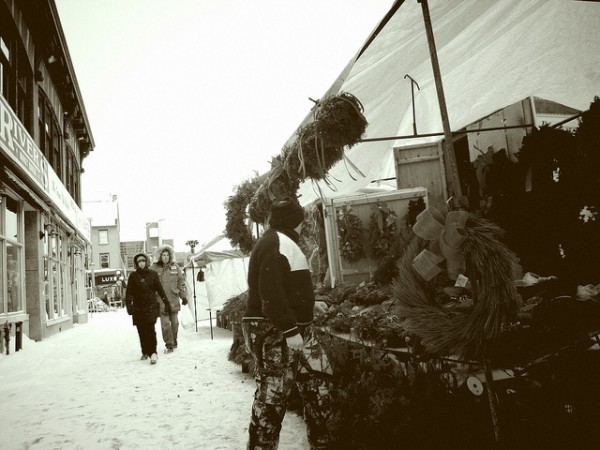 Historically markets have played an important role in cities and were often the heartbeat of the community. For many people they were, and continue to be, part of everyday life. In the past markets formed the link between urban and rural life as farmers and craftsman would bring their produce, livestock or other goods to the market to sell. The items for sale were representative of the resources, needs, and wants of the community it served. In this sense markets can provide a wonderfully broad understanding on the city and culture they are located in.

Ottawa, of course, is noted for the ByWard Market which remains a lively marketplace that used to cater to the blue-collar neighborhood Lowertown. Of the 5 original markets in Ottawa, only two remain – the ByWard Market and the Parkdale Market which is located in Hintonburg. Both of these continue to be hubs of activity within their communities.

In addition to these two permanent fixtures Ottawa has a number of other weekend pop-up markets where you can find local produce, baked goods, and a range of other offerings that can change by the week.

This summer I was impressed by the crowds at the Lansdowne farmers market each time I went, and seeing so many parents there with children brought back fond memories of when my dad would take me with him to the farmers market when I was growing up. Looking back now, the market was a fantastic place to learn about the local community, craft, and commerce.

Back then, bumping into friends gave the adults an opportunity to catch up and allowed us kids to explore in the safety of a pack – fortunately for our parents it was not a very large market. It was commonplace to run into people we knew and it became part of the fun of going. During the summers when we would go regularly we also came to know the vendors quite well.

Having the opportunity to talk to, and get to know some of them was an excellent lesson in mastering a craft. Not only could the farmers detail all the different ways their produce grows, but local artisans selling wooden toys or Christmas ornaments would tell you everything you wanted to know about their creations. As a curious kid I loved hearing about how things were grow or made.

If I think back, the market was also one of my first opportunities to understand the value of money. Given five dollars to spend however I wanted was both a gift and a curse. It forced me to prioritize what I wanted and often times required that I negotiate to get what I wanted.

At the time it was hard to realize the value of these experiences because I was just there to have fun. In recent years I was reminded of how fun markets are when I unintentionally stumbled upon some while travelling. Not knowing that there is a long history of Christmas markets in Europe, I made that discovery while living in Switzerland. It was wonderful to see so many people out even as temperatures started to drop. Last fall, while walking in New Orleans, I came across an outdoor night art market which had some fantastic and quirky work by local artists.

By comparison, the challenge in Ottawa is obviously temperature and weather related – quite simply, our winters are harsh. This has led to other opportunities though; in the last couple months there was the 613 Night Market and event held at the Shaw Centre (formerly Ottawa Convention Centre) and a three day Christmas market at the Canadian Museum of History.

While there is something nice about walking through a European market drinking mulled wine on a nice winter day there is also something appealing about having a glass of beer or wine while perusing the vendors in the warmth of a good building if it is minus thirty outside.

Despite the fact that the Night Market was held in one of the large nondescript conference rooms, as soon as you stepped out of the conference from into the atrium you were greeted with a view city glowing in the night light. The building showcased the city similar to the way the market showcased the work or local creative’s, craftsman, and food vendors.

With the still growing focus on supporting local, if Ottawa markets need to be held indoors because of our climate we should recognize this as a great opportunity to also show off some of our local architecture as well. In my opinion having a Christmas market in the Canadian Museum of History does just that.