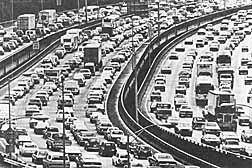 The City of Toronto’s Medical Officer of Health released a damning report in March on “The Impacts of Traffic on Health”. The report is full of useful information about the negative impacts of traffic on health, using examples of studies from around the world and from Toronto itself. It studies not only air pollution, but also the effects of accidents, noise, reduction of physical activity, and the impact on social cohesion and mental health. It’s a must-read for anyone who wants to argue for reducing traffic in the city.

Some of the most interesting points:

In the extensive discussion of the effects of air pollution, the report cites studies of Atlanta during the 1996 Olympics, when a lot of car traffic was temporarily replaced by transit. Not only was measured air pollution reduced, but the number of children admitted to hospitals for asthma attacks was reduced significantly. The same phenomenon was observed around the Peace Bridge between Buffalo and Fort Erie when traffic temporarily dropped by 50% after Sept. 11, 2001.

Discussing the effect of vehicle speed on injuries and deaths, the report notes that cities that have created 20 kph maxiumum speed zones have seen a real decrease in vehicle speed, and reduced traffic collisions by 60%, and those with child pedestrians and cyclists by 67%.

Multiple studies show that urban areas which are designed so that people are car-dependent reduce social interaction within a neighbourhood, and therefore social cohesion.

Meanwhile, if children are deprived of the opportunity to walk or cycle short distances because of parent worries about vehicle collisions, they become more dependent and less physicially active — resulting in greater stress on parents, and not only worse health, but also worse academic performance.