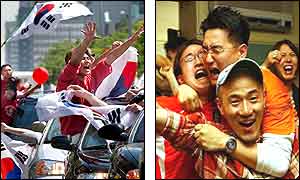 A few of us have been complaining about the World Cup celebrations going on around Toronto. Quietly, to ourselves, not wanting to be the inevitable naysayer or rain on somebody’s else’s parade. I even want to like it.

One of my greatest Toronto moments ever was walking north up Clinton at 4AM in 2002, coming from some party on Niagara, starting to hear cheering in the distance. By the time I got to Bloor, there were hundreds of Korean fans (and instant Korean fans like me) crowded around the entrances to café’s with TVs. In a lightest of rain, I ended up sitting in the middle of Manning watching Korea win on a big screen pointed to the street, with maybe 200 other orderly folks who only stood up in moments of excitement. When they won, there were instantly thousands of Koreans (and pretend Koreans like me) filling up Bloor. As the sun came up, we marched all the way to Bloor and back to Little Korea. It was fantastic, beautiful, unplanned and joyous. I walked back to my house in Seaton Village pretty sure I saw the moment Toronto’s Korean community said “we’re part of Toronto too.”

This World Cup though, there are maniacs out in the streets before the games even begin, screaming and baying, seemingly ready to drag ethnic corpses through the streets like Toronto was Mogadishu. Sweaty, drunken, shirtless nationalism performing for TV cameras — nothing seems organic or natural and most importantly, happy. On Dundas last week the Fire Department had to hose the blood off the streets after a brawl. In today’s Globe, John Barber wrote one of his best columns ever on this, saying:

There have already been at least three soccer celebrants stabbed in Toronto, one fatally, in an atmosphere of rising violence that soccer-seasoned police say caught them completely off guard.

Never before has such violence erupted during the early round of World Cup play, according to Insp. Kinsman, a veteran of the downtown divisions where the most flags flap every four years. “I just find the level of incivility this time around is incredibly high,” he said.

The differences in 2006 include an unusual number of assaults, an epidemic of dangerous driving and the noticeable participation of youth gang members in the so-called celebrations, according to Insp. Kinsman.

People are driving the streets with children hanging out the windows or sitting on the hoods of their cars. They are dancing on the roofs of police cruisers. They are invading rivals’ turf and picking fights. They are behaving, as befitting the tourney’s universalistic claims, like the world’s biggest idiots.

For those of us who have no team, the enemy is everybody who does. Whatever its colour, a flag flying from a car window signals aggression. Last week I saw something I have never seen before in Toronto: a driver honking angrily, shaking his fist and shouting at people getting on and off a streetcar at a stop, blocking his lane. Naturally, it seemed at the time, his car was covered in flags.

One friend asked, why do Portuguese fans crowd into their pocket rocket Honda’s, their vision obscured by flags, and sit idle in their own traffic on Dundas? Why don’t they walk? And why do we tolerate it (and why do I feel guilty for starting not to tolerate it)? Why do we tolerate riding our bikes through the city and getting whacked by flags attached to passing cars? Why is passing through some neighbourhoods after a win like running a drunken, macho, aggressive date-rape-ready gauntlet? This isn’t what Trudeau had in mind. Maybe my patience is running out and fear I might start repeating what I heard an Italian fan say to a car simply driving by with an English flag when I see this aggressive un-Torontonian stuff: Go fuck yourselves.